The Bluefin Cruise 10’8” Paddleboard: An ideal SUP for anyone 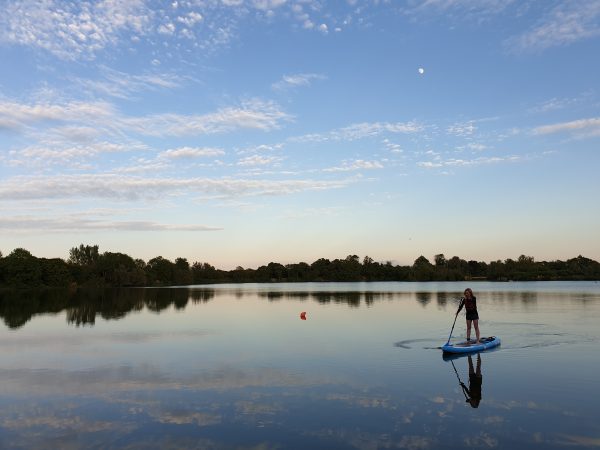 What is Stand Up Paddleboarding?

You would have to be living under a rock not to have noticed the recent boom in the popularity of stand up paddleboarding. Known as SUPing, it has particularly taken off in the last six months. It seems you can’t scroll through Instagram without coming across someone grinning at the camera, paddle in hand. Or the new version of the “hot dog legs” phenomenon, sat on the board with toes pointing towards the sky, surrounded by sparkling water.

SUPing originated out of Hawaii in the 1940s, and became modernised as a sport in the 1990s. Personally however, I have only really known about it for the last 24 months or so. At the end of last summer, I decided to take a 3-hour course at my local country park lake. There I was taught how to get on the board, how to stand, how to paddle and most importantly(!) how to get back on the board should I fall in. I was hooked, but the season was already over. And when I saw how much the board I had used for the day cost, I unsurprisingly didn’t do anything more about it.

But when lockdown happened and life took a slightly more dismal turn, my mind turned back to SUPing. I live in a city built around a river, and I also have a boating lake just a three minute walk from me. So as a pick me up and a new way to stay fit and active in lockdown, it was a no brainer.

I began by asking some of my SUPing friends about their boards. Nearly all of them owned inflatable boards, purely from a practicality perspective. It seems that not many people have space in either their homes or their cars for a hard board. In addition, the benefits of an inflatable generally make them the more attractive option for the majority of SUPers. A number of my friends own the Decathlon paddleboard. This is a great, lightweight entry level board for a decent price, and they are still going strong after a few years of use. But I wanted something a little more advanced, and another company that kept coming up was the British company Bluefin.

Relatively new to the paddleboard market, Bluefin clearly have an amazing marketing team. Once I had started searching for boards theirs turned up in my social media feeds more than any other. The reviews from seasoned SUPers were always positive and the price point fell into the middle range. Perhaps most importantly, it came with a 5-year warranty which was a huge selling point for me.

With my husband standing at 6’2” and myself at 5’3”, we had to choose between their 10’8” board and their 12’ board. The former is suitable for those under 6’ and the latter for those on the taller side. In the end we chose the smaller Cruise 10’8”, purely because the recommended weight of the 12’ board is for those 85kg+ which was more than either of us weigh. Plus the boards themselves fall into the average weight category for a paddleboard (12.6kg for the 10’8”, 14kg for the 12’). As we were likely to be walking with our board rather than chucking it in the car boot, that extra 1.4kg quite frankly felt like an unnecessary addition.

The first time I set foot on my Bluefin board I fell in love with it. It feels really firm under foot, which is due to the board being 15cm thick. When I’m on it, if it’s bending in the middle at all I don’t feel it. The ride is smooth and incredibly stable. When I go from kneeling to standing there is barely even a wobble. I’ve never once felt at risk of falling off, not even when a flock of geese decided to take off right next to me.

Bluefin also sell their boards with a LOT of accessories. Ours came with a pump, a repair kit, three fins, an ankle leash, a waterproof pouch for your mobile phone, a height-adjustable carbon fibre paddle and the rucksack to put everything in. But the piece de resistance is the kayak seat. Yes, you heard that right. The Bluefin Cruise can be converted into a kayak simply by attaching a seat. And don’t worry – you won’t end up paddling around in circles. An extra fin can be added to the paddle to turn it into a double-ended kayak paddle. As the board can take a weight up to 150kg, I could in theory sit in the kayak seat while the husband stands up and paddles. The board also has carry handles at either end and one in the middle. So whether you decide to share the load or let one person carry it on their own, it’s surprisingly manoeuvrable when inflated.

The downside to the board being 15cm thick is that it takes more air. It takes me about 10 minutes to pump the board up to the desired 15-18PSI (my resolve tends to waver around the 12PSI mark). Other boards on average only need to be pumped up to 12-15PSI. Also, any board is going to be a little heavy and cumbersome to carry. As someone who is on the shorter side, once I’ve packed everything into the rucksack – which stands at 3’ high – I resemble Reese Witherspoon from the film Wild. I have to put the bag on my back whilst sitting on the floor, and then struggle to my feet. This comes with the very real risk of getting stuck on my back like a turtle. Thankfully, once it’s on and you’re up, it’s surprisingly comfortable to wear, and the straps are easily height adjustable so that it can fit the wearer perfectly.

When it comes time to deflate your board, prepare yourself for the intense and loud rush of air when you first press the pin down. If like me you do this in your front garden you might experience some glares from the neighbours. And it goes without saying that you need to turn your face away from the pin when you do this. But quite honestly these negative points are hardly unique to the Bluefin, and I’m delighted with my choice of board. Plus I feel safe in the knowledge that if something goes wrong, I have the warranty to fall back on.

What else do you need to consider?

If you’re thinking of taking up paddleboarding, there are a few other things you might want to buy. The first is a waterways licence from British Canoeing. This will allow you to paddle on over 4,500kms of waterways in England. It costs just £45 a year, and the money you pay contributes towards the maintenance and protection of waterways. This is in addition to giving you civil liability insurance. Not every SUPer chooses to buy a licence, but it pays to be a responsible water user.

Another non-essential but advisable purchase is a buoyancy aid. Some lakes will not allow you on the water without one, but generally on rivers it’s a personal choice. I wear this one from Helly Hansen. Lastly, you might want to invest in some water shoes, especially if you plan on paddling in winter. There are a lot of options out there, but after some research I chose these from Saguaro, and they fit the bill just fine.