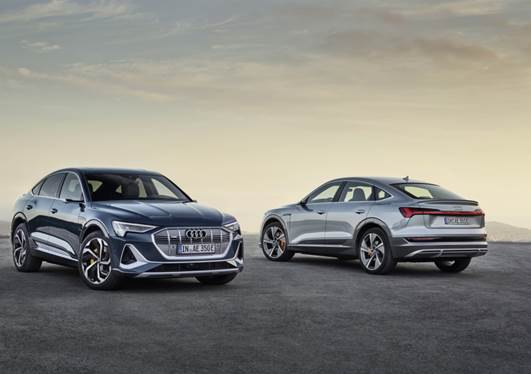 Audi just pulled the wraps off of the E-Tron Sportback, the company’s second electric car, at the 2019 LA Auto Show. Coming to Europe in the first half of 2020, the top-tier version of the new premium EV will offer up to 446 kilometres of range (277 miles) and is powered by dual electric motors with a total power output of 265kW, or around 350 horsepower. A slightly less powerful version of the Sportback with a smaller battery will start at €71,350 (around $79,000).

Like the E-tron crossover, the Sportback 55 gets two electric motors, one on each axle, delivering 355 hp and 414 lb-ft of torque. In S driving mode, “boost” mode can be activated, bringing eight-second bursts of 402 hp and 490 lb-ft. That gives this car a sprint time of 5.7 seconds to 60 mph. According to Audi, in most driving situations the Sportback is rear-wheel drive, but when needed, the front motor can kick in instantly. This can happen predictively in slippery conditions, or when over- or understeer is detected. With the batteries fitted as a wide, flat block and the motors on each axle, the E-tron Sportback has a nearly 50:50 weight balance.

The range is specified as 277 miles on a charge in the WLTP cycle, but that testing cycle is generous, so expect the Sportback to get less official range here with the EPA’s test procedure. Air suspension is standard—varying with the drive modes—lowering the car up to 3 inches at speed.

“With its familiar SUV proportions and classic design the e-tron provided the perfect entry point for Audi customers approaching fully electric driving for the first time, and has very successfully paved the way for the new e-tron Sportback to head in an even bolder design direction,” says Director of Audi UK Andrew Doyle.

“As its styling would suggest the e-tron Sportback is positioned to offer a more sporting bias, and this is reflected in the fact that our specification line-up for the model in the UK will begin at S line-level – but this is still fundamentally an Audi e-tron. Anyone who has already savoured that car’s amazing refinement and the numerous features that make it so easy to live with can rest assured that the Sportback doesn’t change the status quo on these fronts.”

The battery system of the Audi e-tron Sportback 55 Quattro stores 95 kWh of gross energy (86.5 kWh net) and operates at a rated voltage of 396 volts. It is fitted as a wide flat block beneath the passenger cell, to which it is bolted at 35 points. The battery system is exceptionally rigid and crash-proof—thanks to a solid protective frame and an aluminium laminate that holds the 36 cell modules. These are arranged on two levels, as a long lower “floor” with 31 modules and a short upper floor with five modules. Each module integrates twelve ‘pouch cells.’ The cooling system is located beneath the cell chamber

With a wheelbase of 2,928 millimetres, the Audi e-tron Sportback has ample space for five occupants along with their bags. Rear headroom is just 20 millimetres less than in the Audi e-tron. The rear footwell is virtually level—just a flat step remains where once the centre tunnel would have bisected the space. Including the 60-litre stowage compartment underneath the bonnet, which houses the vehicle tool kit and charging cable, the car offers a total of 615 litres of luggage capacity. Folding down the rear seat backrests increases the luggage capacity to 1,655 litres. The tailgate opens and closes electrically, by foot movement as an option.

As for safety tech, the E-tron Sportback has a ton of it, including rear cross-traffic assist, Audi presence 360, lane-keeping assists and forward collision warning. There’s more: adaptive cruise, collision avoidance assist and an emergency assist, as well as night vision, park assist and a 360-degree camera. The Sportback, like the E-tron, uses data from navigation, five radar sensors, five cameras and 12 ultrasonic sensors to operate all of these safety systems. We don’t know what will be standard and what will be optional here in the U.S., as Audi hasn’t decided yet.