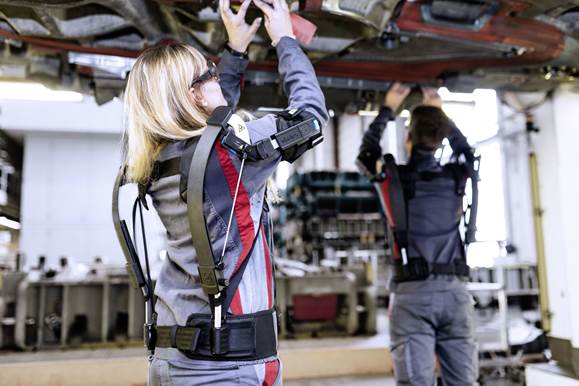 Audi wants to further improve its employees’ ergonomics in its production facilities. For this reason, the company is currently conducting a comparative study of two exoskeletons.

Many process steps in production involve overhead jobs that are unavoidable. When technical and organizational measures for optimum ergonomics have been exhausted, exoskeletons frequently offer valuable support. Two of these aids – the Paexo from Ottobock and the Skelex 360 from Skelex – are currently being tested by Audi.

These external support structures are designed to help employees when they are performing overhead tasks by protecting their joints and tiring their muscles less quickly.

All in all, around 60 employees are currently using the exoskeletons over a period of several weeks at selected workstations in assembly, at the paint shop, and at tool construction at the Ingolstadt site.

Both the Paexo and the Skelex 360 are worn like a backpack on the shoulders and secured in place with a belt around the hips. Arm shells support the arms when the wearer is performing overhead work. These absorb part of the arm’s weight and re‑direct it to the hips via support structures. This reduces the burden on the shoulders. This is done purely mechanically, without any motorized assistance.

This is not Audi’s first exoskeleton rodeo, the German automaker says it’s had “promising results” from previous pilot projects. And other manufacturers are also looking into easing the strain on workers by employing exoskeletons, including Ford and Hyundai.

“Our employees are our most important asset,” said Audi’s Peter Kössler. “By constantly reducing the burden at the workstations, we can enhance their health and wellbeing. New technologies such as exoskeletons, with which we are making production more and more progressive, also contribute to this.”

Is freedom of movement restricted? Is the material still pleasant even after it has been worn for some time? Or how much support do exoskeletons offer employees in performing their tasks? The comprehensive practical tests are designed to help adapt the exoskeletons to the employees’ needs in an ideal manner. They are being tested in both static and dynamic activities, e.g. installing the brake lines, screwing the underbody paneling into place and applying corrosion and sealing protection. Audi has already gained initial promising experience with one of the two exoskeletons in the Győr plant in Hungary.

Exoskeletons are nothing new in Audi production. The company has already been dealing with these aids for around four years in order to enhance ergonomics. Since then, Audi has regularly tested different systems in pilot projects. One such system is a structure created by Laevo that reduces the burden on the person’s back when they are lifting or moving objects. Initial tests in logistics, the pressing plant, and assembly yielded promising results. So it should come as no surprise that the ergonomics experts from the company with four rings see considerable potential for using exoskeletons in overhead work. “The main focus here is always on ergonomic benefit, wearing comfort and reducing the burden on our employees,” says Ralph Hensel, a specialist in exoskeletons at Audi. He says the goal is to implement exoskeletons in the long term and on a cross‑site basis at specifically selected, predetermined workstations.