Amazon launched an all New Line-Up of Echo Devices 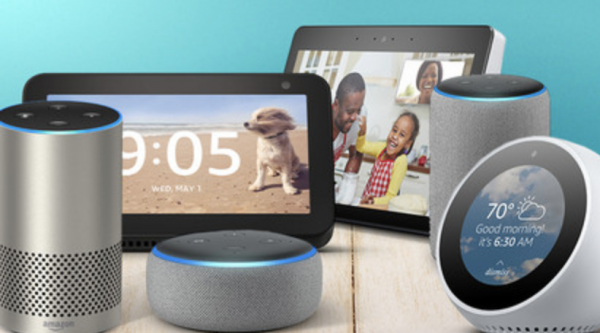 Amazon has introduced an all-new line-up of the echo devices including the Echo, Echo Flex, Echo Dot with clock and Echo Show 8. The ability to access Amazon has been extended to new horizons by Amazon. With even more ways to access Alexa, users can now make it a part of their daily lives whether they are on the go or at home. Moreover, Amazon has introduced new Alexa features to complement the new range of devices as well as new devices and services from eero and Ring.

All Eco devices introduced by Amazon

The all-new Amazon Echo features and updated fabric design. It’s not just rocking a new design but the rocks the surrounding as well with it is even better sound. The design has options suitable for any style you may want including colors: Twilight Blue, Charcoal, Heather Grey, and Sandstone. It also features a 3-inch woofer and increased back volume to produce stronger and clearer bass. This particular device is priced at only £89.99.

Echo Flex is considered to be the most affordable way to add Alexa to your tech ecosystem. It is specialty is that it plugs directly into the socket, saving you the hassle of handling wires. It is also super portable due to its small size but it does the job of listening to your commands and following them pretty well. The Flex also lets you charge your smartphone or any other device as it has a built-in USB port. It is priced at only £24.99.

Echo Dot has been updated with a new option that features a bright LED display which shows time, outdoor temperature, timers, and alarms. These features are where the name comes from. It is the perfect addition to your bedside table or countertop as you can make full use of the alarm. This particular device is priced at only £59.99.

The Echo show family has been revamped with a massive 8-inch HD display, crisp and powerful sound and a built-in camera. Due to the diverse features, it becomes the most versatile device of the lineup. This device is priced at £119.99.

Echo Studio is the best sounding Echo by Amazon according to their claims. It has five directional speakers to produce an immersive sound, room adaptation technology, and a built-in smart home hub. It has been equipped with a 5.25-inch woofer and 330W of peak power which enables it to produce deep, rich bass. It also has a 1-inch tweeter and three 2-inch midrange speakers. This product is priced at only £189.99 for all the great features it has to offer.

Echo Buds are wireless and feature the Bose Active Noise Cancellation Technology. Their wireless features allow for hands-free access to Alexa. They have been designed to be used in a lot of different situations. With the Echo Buds, you can have access to Alexa on the go. They are priced at £119.99.

“We love hearing feedback from customers about how they use Alexa throughout their day—whether that’s listening to music, dropping in on a loved one, trying out a new recipe or playing a game with the family,” said Jorrit Van der Meulen, Vice President, Amazon Devices International. “We hope these new Echo devices will give customers even more ways to access Alexa—whether that’s through the best-sounding Echo yet—Echo Studio, the reimagined Echo and Echo Dot, new designs like Echo Show 8 and Echo Flex, or new experiences for Alexa on-the-go with Echo Buds.”

All that is new with Alexa

Alexa now has the ability to learn your routines. It studies your tasks and records the data in order to come up with your everyday routine or even varied routine over different days. All you have to do to access the routine set-up is to say yes when Alexa asks for it and you will be good to go.

Alexa can tell you about her responses

Now users have the liberty to ask Alexa about your own question or what you just said to which it responded. For instance, you can ask Alexa,” Alexa, tell me what you heard” and Alexa will read back your most recent voice request.

Available later this year, customers will be able to choose to have their voice recordings older than three or 18 months automatically deleted on an ongoing basis.