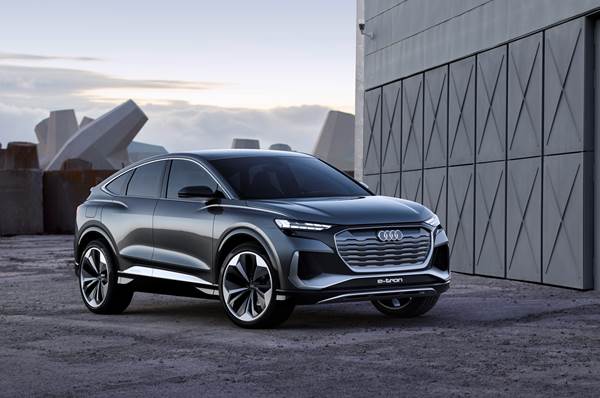 Pure SUV or Sportback SUV with a dash of coupé extract? Audi Q3 and e-tron customers are already accustomed to choosing which of these silhouettes suits them best, and the unveiling this week of the new Q4 Sportback e-tron concept means the same dilemma will also soon face fans of the brand’s first fully-electric compact SUV. The new Sportback study lines up alongside the Q4 e-tron concept, one of the leading lights of the 2019 Geneva Motor Show, and like its sister car is scheduled to enter series production in the near future as the seventh fully electrified Audi in the portfolio.

“With the Q4 e-tron concepts we are outlining our plans to cascade e-tron technology into the compact SUV class, and I think these studies clearly show that we will be downsizing without in any way downgrading,” says Director of Audi UK Andrew Doyle. “Like the two e-trons that paved the way for them both versions are hugely attractive interpretations of the SUV and Sportback brief underpinned by the very latest electrification technology delivered with characteristic Audi quality and ingenuity. I have no doubt that they will encourage wider acceptance of the benefits of electric driving, with the Audi e-tron range.”

The two Q4 e-tron concepts are notable as the first Audi models to be built on the Volkswagen Group’s modular electrification platform (MEB), which will provide the foundations for numerous electric vehicles from the compact class upwards in the future.

Their measurements are almost identical – they share the same 1.9-meter width and 2.77-meter wheelbase, but at 4.6 meters in length and 1.6 meters in height the Sportback is fractionally longer and lower, with just one centimeter separating the duo in each dimension.

The two concept cars are also twins in technological terms, and give a clear indication of the direction Audi engineers are taking for the powertrain of ‘performance versions’ of the series production model. Two electric motors mobilize 225 kW of system output which is sensitively handled via Quattro all-wheel-drive as is typical for Audi. Thanks to excellent traction, both versions of the Q4 accelerate from zero to 62mph in just 6.3 seconds and are restricted to a top speed of 111mph.

Spanning almost the entire length of the underbody area, the large battery that brings the Q4 Sportback e-tron concept to life has a capacity of 82-kilowatt hours, giving a WLTP-certified range of up to 279 miles that sets a new benchmark in this class. Versions with rear-wheel drive will push on even further, covering a range of up to 310 miles based on WLTP test data.

The brand with the four rings launched its electric offensive with the world premiere of the all-electric Audi e-tron SUV in September 2018. By 2025, Audi will offer more than 20 models with all-electric drive in the most important markets worldwide and achieve roughly 40 percent of its sales with electrified models. The SUVs within this portfolio include the e-tron and the e-tron Sportback. In addition, there will be a range of models with classic body layout such as Avant and Sportback. The range will cover every relevant market segment from the compact class to the luxury class.