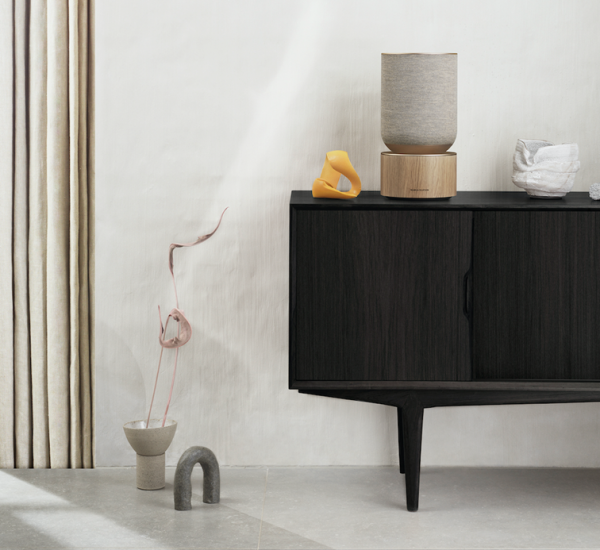 Sound familiar? It should. A few other brands have marketed similar solutions, but having had a listen and a chance to quiz its designers and engineers, you can color me excited about the Beosound Balance.

The Beosound Balance has been designed in partnership with Benjamin Hubert from the British industrial design studio LAYER. From the get-go, it has an unmistakably minimalist, Scandinavian look and feel.

Featuring an oak base and 360 degrees knitted finish speaker section, with hidden capacitive controls on top, it’s about as unassuming as a device this size can get. The only noticeable design flourishes are the Bang & Olufsen branding on its front and a few aluminum accents around its base and top.

Under the hood, it’s loaded with cool tech. The speaker includes seven drivers in its top, two of which are backfiring. Backing this up there are dual opposed woofers in the base and middle of the speaker. Up top, you’ll also find six mics and hidden touch controls with ambient lighting that can be used to switch profiles, pair to devices, skip songs and play/pause audio.

If you pick it up you’ll see basic power, ethernet, 3.5mm, and USB-C inputs, plus a nifty kill switch that tells the mics to stop listening, which will be particularly useful for privacy focussed listeners. However, turning them off will mean you’ll have to miss out on some of the speaker’s smart functionality.

The Balance uses the mics and other background sensors to intelligently detect when a person is near, prompting it to power up its top facing hidden touch control inputs. It also supports Google Assistant, which will let you skip tracks or get updates on the weather using voice commands.

There’s also support for Apple Airplay 2, Google Chromecast and Spotify Connect, so you can pair the speaker to your existing system as needed.

The Balance borrows several features from Bang & Olufsen’s more expensive speakers and comes with a new significantly improved app, which makes it quick and easy to set up and tweak to your heart’s content.

The initial process saw the demonstrator power up the app and speaker, and click on the setup icon. From there the app set the speaker to optimize itself for its environment using beamforming – tech that lets the speaker scan and tweak how it plays outgoing audio to match its placement in a room.

What sets the Beosound Balance apart is its new customization modes. The speaker’s got two key modes and a wealth of profiles to choose from. The first mode is a basic 360, omnidirectional mode designed for when you’re walking around the room, or having a house party. It basically gets all the drivers to shoot out at the same time, creating a uniform, albeit less detailed and precise, sound.

The second is a custom directional sound mode that uses the company’s Active Room Compensation tech to provide a more focused, stationary listening experience. You can do this using the scanner or manually in the app.

Thankfully you won’t have to wait long to try the Balance for yourself, as it’s available today in the Bang and Olufsen’s physical and web stores, and we’ve been told to expect our review sample soon.

If you want to grab one before you’ve heard our definitive verdict, you’ll have to be willing to part with a lot of cash. The Beosound Balance currently carries a hefty £1750 price tag.

One thought on “Introducing Beosound Balance from Bang & Olufsen: the ultimate home speaker”