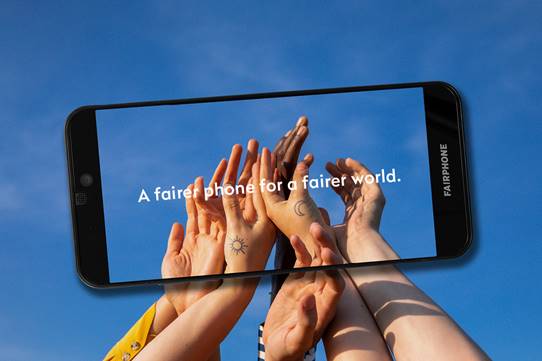 Vodafone and Fairphone have come together in a strategic partnership to bring to the world the more ethical, reliable and sustainable Fairphone 3 to all the Vodafone retail customers in the European markets. Some of the prominent markets include the UK, Germany, Italy, Spain and Ireland by the end of 2019.

The new Fairphone 3 is the third-generation Fairphone smartphone. It is a durable Android smartphone based on a modular design that allows for different elements such as the screen, battery and camera to be repaired easily. This helps to extend the life of the device and thus minimises its environmental footprint.

Both companies will also collaborate on key industry sustainability issues including the circular economy, electronic waste and responsible sourcing. The partnership is in line with Vodafone’s purpose to improve the lives of 1 billion people while halving its environmental impact by 2025.

Vodafone Group Chief Commercial Operations & Strategy Officer Ahmed Essam said: “At Vodafone, we’re working hard to build a digital future that works for everyone and this strategic partnership between Vodafone and Fairphone brings together our expertise as Europe’s leading and largest converged technology communications company with the recognised expert in sustainable smartphones.”

Fairphone CEO, Eva Gouwens said: “Fairphone is showing that there is a market for more ethical phones to inspire the rest of the industry to produce more ethically.  Working with a large operator such as Vodafone helps to bring sustainable electronics to the mainstream market and therefore this is one of the strongest signals we can send to the rest of the industry.”

Fairphone is working to inspire the electronics industry to produce more sustainably by creating scalable models that can be replicated and by showing that there is a demand for more ethical electronics.

Fairphone, founded in the Netherlands in 2013, says its Android phone is ethically produced to ensure that workers, from the metal miners to manufacturers and office staff, are properly treated and paid a decent wage. The phone is also built in such a way that upgrades and repairs are easier, to ensure less electrical waste ends up in landfill, and the need to replace handsets is removed.

The deal with Vodafone will allow the two companies to collaborate on best practice and share knowledge on industry sustainability issues including electronic waste and responsible sourcing. Bosses at Vodafone said will help it achieve its commitment to cut its carbon footprint in half and buy all its electricity from renewable sources by 2025.

The company has also vowed to re-use, re-sell or recycle 100% of its network waste and help customers extend the lives of the devices they already own.

Fairphone actively encourages the re-use and repairs of its handsets, offering recycling options and invests in recycling programmes to buy back e-waste from landfills in Africa for safe recycling in Europe.

As an industry leader in responsible sourcing, Fairphone traces materials used in Fairphone 3 to their source and incorporates fairer, recycled and responsibly mined materials such as Fairtrade gold. The company also works with suppliers to establish better working conditions and better worker representation for people employed in the manufacturing industry.