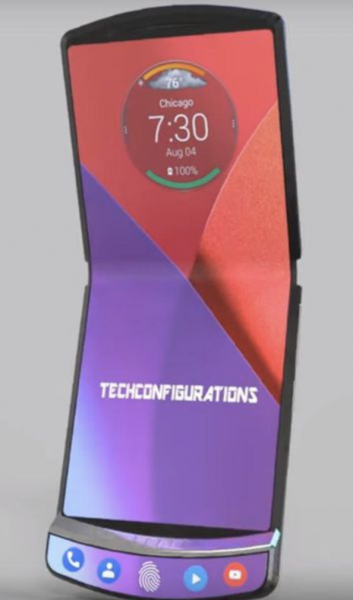 The photos were leaked by reliable tipster Evan Blass and Dutch site Mobielkopen. It is seen to sport Red and Black finishes, and when folded, it looks like an ordinary flip-phone. The small screen placed on top of the fold can show notifications, messages, email alerts, video, and more. There seems to be a camera sensor right below the small screen for selfies.

When flipped open, the larger screen clicks open unfolding from the middle in a vertical manner. The larger screen reveals the phone’s bigger screen wherein the phone can now be used in a normal manner. One of the photos shows the rear end of the phone, and a rear fingerprint scanner is also spotted at the back. The phone, overall, is reminiscent of the Moto Razr of the old times, but the foldable screen and the secondary screen on top shows the evolution of technology over the years.

As mentioned earlier, Motorola Mobility has sent invites for a launch event on November 13 in Los Angeles, and the Motorola Razr is expected to launch there. Rumoured specifications include a 6.2-inch (876×2142 pixels) OLED display (when unfolded). Earlier leaks suggest the phone will be powered by the Qualcomm Snapdragon 710 with 4GB or 6GB of RAM. It’ll supposedly have a 2,730 mAh battery and 128GB internal storage.

While the phone looks quite lip-smacking, it can cost as much as $1,500. That’s a steep price.