A foldable smartphone so addictive it would replace the iPhone! 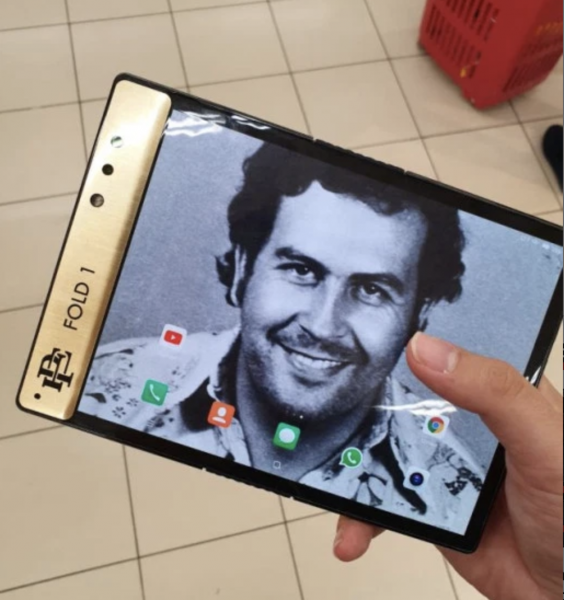 The infamous greatest drug lord of the world, Pablo Escobar, is still to be remembered all thanks to his brother. The company Escobar Inc. run by Pablo’s brother has announced its entry in the handset industry. It was only clever of Pablo’s brother to use the infamous sirname as the name of the company. He has also named the phone Escobar Fold 1. The name itself is intriguing enough for people to buy it.

“Imagine a reality, where you can ease fold your phone into a tablet,’’ crows the Web site for Escobar Inc., which is run by Roberto, the onetime accountant for the Medellin Cartel and Pablo’s older brother. “This is now possible, thanks to the Escobar Fold 1.’’

The Escobar family has never failed to surprise the world. First Pablo had the world running on its nerve with his greatest trade of cocaine. Now, is his brother going to do the same with the handset market? Apparently yes because he has introduced a foldable smartphone at an astonishing $349 price tag. It seems pretty unreasonable as the rival foldable smartphones are priced at at least a 1000 dollars more. But who knows what his plans are. People are already contemplating where he managed to find the funds to invest in the idea.

People on the internet cannot let go of certain things. The models used to promote the Escobar Fold 1 are one of them. These models are not even using the phone. They are merely posing with it. It is like selling a beauty product. Instead, it is not.

Photos on the site also include women with what looks like guns being held to their heads biting the phone as if fighting to keep it, and several beauties naked, leaning on each other, as one of them holds a device.

It seems like a mere gimmick or simply a way to sell a terrible device using the models to attract customers. But let’s see what the phone does when it actually hits the markets.

And then there are the specs. According to the Escobar Fold 1 product page, it comes with the Qualcomm 8150 (which was rebranded last year to the Snapdragon 855). The entry-level model touts 128GB of storage and 6GB of RAM. The pricier model, which retails at $499, boosts that to 512GB and 8GB respectively.

The 7.8-inch foldable display uses an FHD+ AMOLED panel. It also includes a dual-camera setup, and the usual accoutrements found on phones in its price range, including dual sim support, a MicroSD slot, a fingerprint reader, and USB-C.

“Apple Boy Steve once looked into space,” a voice bellows in the video. “He saw Pablo Escobar with a phone beyond anybody’s imagination.”

It is very hard to believe that a foldable smartphone can be sold at a price of $349. These things have to go through a long and expensive process to come into shape. Moroever, the specs included in the device are not cheap either. So, is it a hoax?

Then again, there are other signs that suggest something more concrete is afoot. The phone’s product page says that units will be shipped by Pablo Phone LTD — a UK-registered limited liability company. Shockingly, this firm actually appears on Companies House’ records, with a registered address in Central London, and Roberto Escobar as a named director.