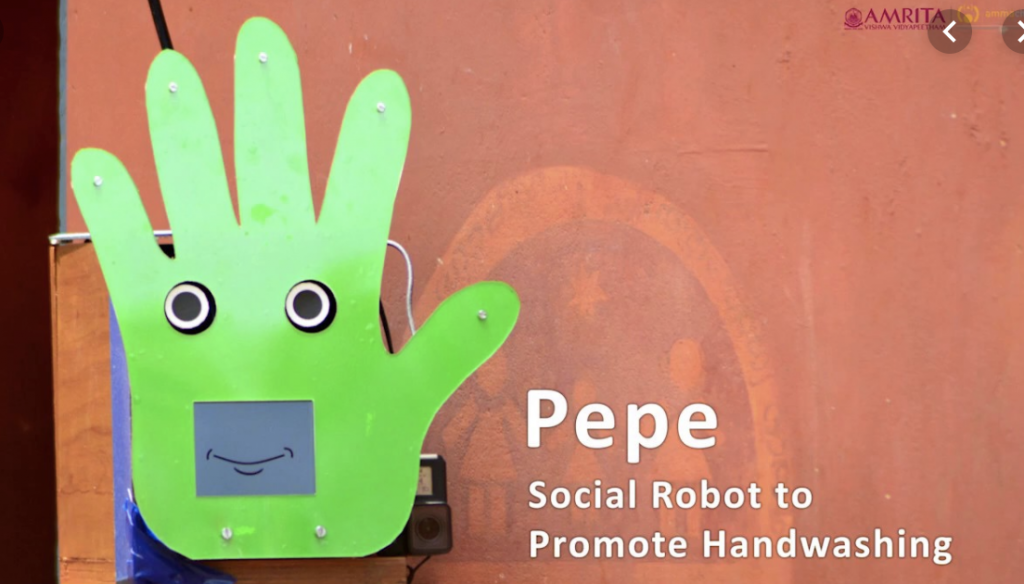 A collaboration between researchers from the UK and India has resulted in a brand new robotic which inspires youngsters to clean their palms. The robotic, named Pepe, was just lately utilized by pupils at a major college in Kerala as a contemporary method to hygiene.

Pepe was mounted to the wall above a hand washing station on the Wayanad Authorities Major Faculty, which has around 100 pupils aged between 5 and 10. A small video display mounted behind Pepe’s inexperienced plastic exterior acted as a “mouth”, permitting researchers to teleoperated the robotic to talk to the pupils and draw their consideration to a poster outlining the steps of efficient handwashing.

Dr Amol Deshmukh, from the University of Glasgow’s School of Computing Science, led the project in partnership with colleagues from Amrita University.

Dr Deshmukh said: “We chose this particular primary school for our research because the pupils are drawn from scheduled castes and tribes, a segment of the Indian population which is most affected by poor sanitation and hygiene. We believe this is the first social robotics study to try to improve the lives of children like this.

“We were delighted by the success of Pepe’s visit to this primary school. None of the children had ever interacted with anything like a robot before, but they were excited to interact with this relatively simple machine, which clearly had a positive effect on their efforts to keep their hands clean.

A set of transferring ‘eyes’ helped bolster the phantasm that Pepe was taking note of the youngsters”s actions. The researchers discovered that the robotic helped pupils to clean their palms extra successfully and extra constantly, boosting their charges of handwashing by 40 per cent. Pupils spent on common twice as lengthy washing their palms after Pepe’s arrival. After the intervention, greater than 95 per cent of the scholars might accurately decide when handwashing with cleaning soap needs to be completed – earlier than a meal and after a go to to the bathroom.

Hand-washing is one of the most effective defences against the spread of diarrhoea and respiratory infections, which cause the deaths of around 1,300 young children each day around the world – 320 of which are in India alone, according to figures from WaterAid India and the World Health Organisation.

“In the future, the research will focus on developing autonomous technology for the social robot, so it is capable of interacting with children without any input from humans. We’re also keen to begin to carry out wide-scale deployments in rural schools to measure the effectiveness of this type of social robotics.”

The study also followed up with a questionnaire completed by 45 of the pupils who interacted with Pepe.

This is the second project that the University of Glasgow and Amrita University have conducted the field of ‘social robot’. Last year, they introduced a four-wheeled robot to help residents of Ayyampathy in southern India carry 20-litre bottles of water from the local well to their homes.