Many key brands lag behind in updating their smartphones to the latest android software due to several reasons. Most brands have only one-third of their smartphones updated to the latest Andriod version. Nokia, on the other hand, has more than 90% of its devices updated in the price range of $200 and above. Most smartphones can’t update due to carrier retailer limitations. However, Nokia has kept up with it and has not disappointed customers.

According to the findings of Counterpoint, nearly 96% of Nokia smartphones that were sold in and after Q3 of 2018 are running the latest Android Pie or have an update issued. Consequently, Nokia has become the fastest brand to reach such a high par compared to competitors who make use of Android.

Up to date software and Security is the need for most smartphone users. Top smartphone brands have been lacking behind in this regard. Other than Nokia and Lenovo, no other brand has shown promising performance in this department. Research results show that most flagship owners have started keeping their smartphones for a long time before they decide to replace it. Consequently, an up to date software and security becomes a basic need for them. Even if the smartphone is not kept for long, updated software and security still should be provided given the prices consumers pay for them.

Comments on the whitepaper findings by Counterpoint:

Research Director, Peter Richardson, noted, “Operating system and security updates are an aspect of Android smartphones that get relatively little attention. In our experience researching the industry, we have seen a few brands focusing on this. And perhaps because manufacturers are not talking about it, consumer awareness is also low. It doesn’t appear among the ten features consumers say they care about most, in our research.” 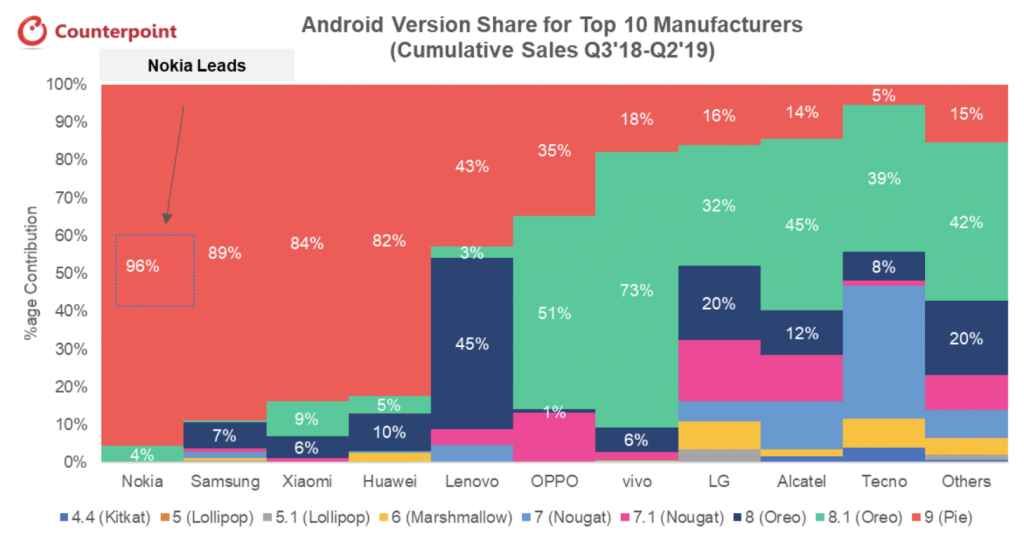 Commenting on the performance of smartphone brands, Associate Director, Tarun Pathak, highlighted, “Among the top 10 smartphone makers, nearly 96% of Nokia smartphones, sold cumulatively since Q3 2018, is already running on Android Pie or have had an Android Pie update issued to them. Samsung closely follows Nokia with 89% and Xiaomi with 84%. Xiaomi is good at ensuring its mid-price range products launch with the latest version of Android.”

Pathak further talked about how several factors come into play when a software update is issued. According to him, some brands show more commitment than others, hence, the difference in research findings.