Noise Cancelling Headphones are a gift for anybody who ends up travelling a lot or works/live in noisy environments. They listen to your ambient noise, and thanks to a bit of electronic trickery, cancel out the noise around you. Shivr is one such noise cancelling headphone, that adds extra features such as 3D sound thanks to its built-in Gyroscope. We had a play with one of their early pre-production models. As such, not all the features are as sharp as they are intended to be, so please do bare that in mind while you read this review. 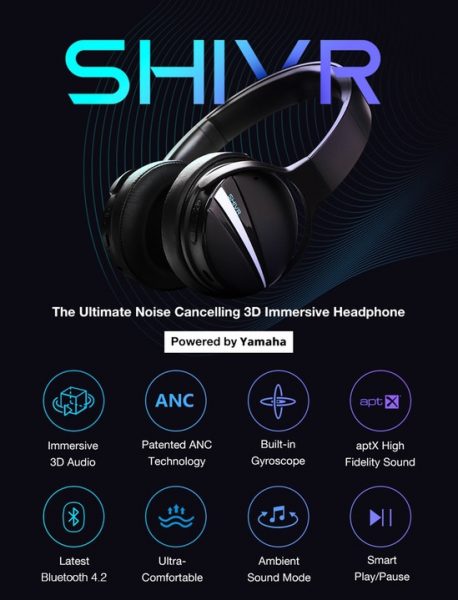 As I ended up with one of the earlier models, I didn’ t get any instructions with them. That meant that it is very easy to not fully appreciate what the device can do. However, after an email to the company, I was sent some so I managed to try that out. If the production version doesn’t have full instructions, you can use this article as a reference.

One of the buttons on the device is called MFC. When I asked what this meant or did, I got the following response:

MFC is multi-function control. when you click, you can switch into different modes: ANC on – Ambient Sound Mode – ANC off – ANC on

When you power it on, it will automatically be ANC on mode. After one click it would change to Ambient Sound Mode, which allows surrounding sound to go into the headphone, so you can talk to people, wearing the headphone. Double clicks to start 3D mode. One click to exit 3D mode.

This is quite important as this button basically does everything.

The software has quirks

Pressing the MFC button allows you to listen to other people, but it does so by muting the music as well as turning the noise-cancelling off.

Shivr got in touch with us and had this to say about this:

In fact, the headphones allow you to listen to other people with ambient sound mode, by letting the environment sound in through microphone. Yes the music is muted and the noise-cancelling is off. Yet, they are not exactly the reason why people who wear shivr headphones could listen to others. This design is intended to allow users to pay attention to the surrounding environment, so they don’t get into dangerous situations when, for example, passing crossroads. Hope this might help you get a better understanding of the product and its design.

Also included in the device is auto on/off. This means that if you take the headphones off, the music automatically pauses. While in principle this is great, it actually means that if you put the headphones around your neck, it will keep the music playing. Moreover, it got frustrating as it would force a play even if I used my phone to turn the music off. The only solution was to take these off completely.

The sound isolation and cancellation they offer is pretty decent. You want to be able to hear just about enough to be safe, and they do that well.

The sound quality was okay. That was because I was sent a pre-production model and I have been promised that the actual version will be a lot better. Keep in mind that it was decent, just not what you’d expect from $200 headphones.

You can find out more information about the Shivr headphones on their website.

You can also check out their Kickstarter campaign to find out about the journey this product took.