Aangan episode 10 has recently aired and it stars Sajal Aly, Ahad Raza Mir, Hira Mani, Mawra Hocane and Zaib Rehman. The play is not on YouTube or any other digital media platform so far. So here’s our review and recap for those who are curious as to what’s happening! 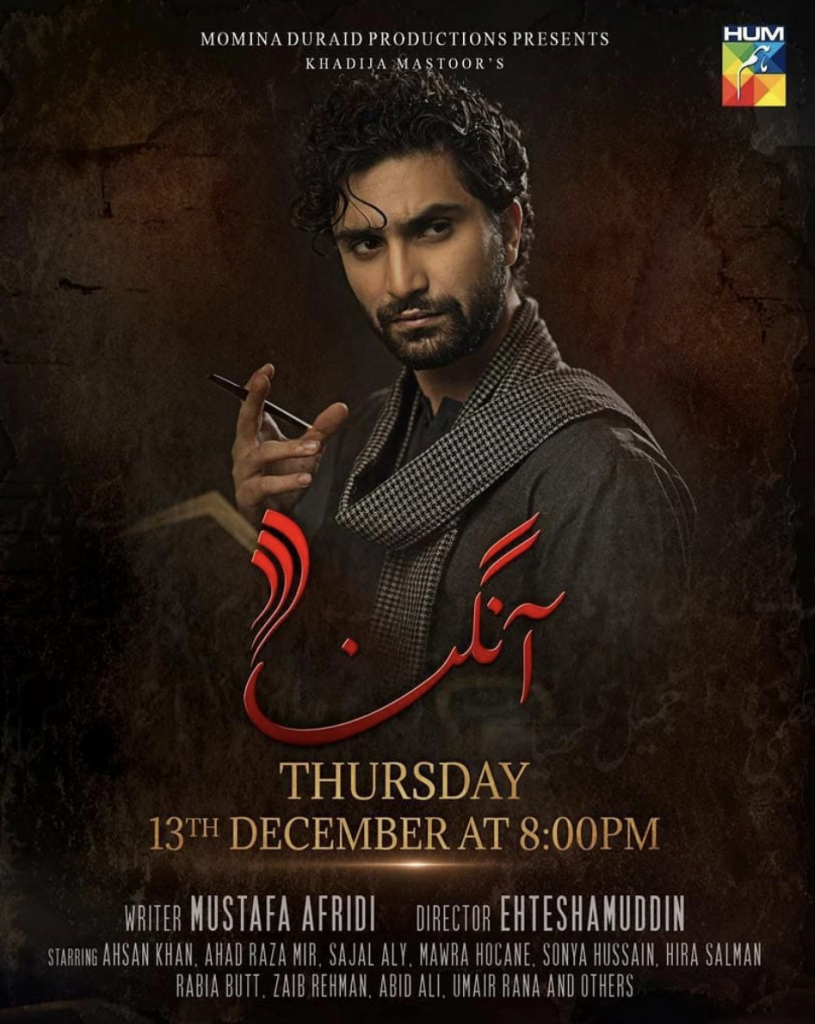 The Story So Far:

The story begins with the love affair between Subhan (Ahsan Khan) and Salma (Sonya Hussayn). Subhan is a poor worker boy, Salma is the rich employer’s daughter. The person who calls the shot in the haveli is Maalikan (Zaib Rehman) who is angrily dealing with a philandering husband, Muzaffar (Abid Ali).

Muzaffar’s had two mistresses, Firdos and Akhtari who also have children with Muzaffar. Muzaffar has two daughters in law played by Madiha Rizvi and Uzma Baig. Muzaffar’s son, Mazhar (Omair Rana) is quite mean to his wife (Madiha Rizvi) and Azhar (Mustafa Afridi) is also not particularly fond of being around his wife and child because he is too busy fighting for a revolution against the British.

Salma runs off with Subhan, gives birth to Safdar and dies of tuberculosis. Muzaffar’s illegitimate children come to live with them. Some have died, only Israr (Hasan Noman) has have survived. Muzaffar and Azhar’s children have also grown up.

Safdar is sent to Aligarh to study. Tehmina’s mother and Jamil’s mother decide that Jamil and Tehmina will get married. Safdar barely writes back to Tehmina. On the night of her ubtan/mehndi however, Safdar writes to Tehmina’s mother and says that no matter who Tehmina gets married to, she will always belong to Safdar. Tehmina commits suicide the same night.

Chammi (Sajal Aly) has grown up to be a spirited firecracker who gets money from her father, Zafar, back in Hyderabad. She’s full of life, not like the other girls in the house. Chammi is often the cause for lament for Maalikan (Zaib Rehman) who is mostly bed-ridden. Chammi gives her hard-saved money to Jamil to pay for his fees for FA. Jamil (Ahad Raza Mir) is Azhar’s son, attempting to do FA as the revolution roars and Azhar refuses to pay for any of Jamil’s college and education.

Chammi and Jamil have an odd relationship as Chammi helps Jamil pay for his BA. Jamil likes to take advantage of Chammi’s kindness and seeking of love. Jamil’s mother asks Maalkan/Dadi to talk to Choti Bahu and ask for Tehmina’s hand in marriage for Jamil now that he’s completed his BA. This leaves Chammi heartbroken – as she sees how Jamil is barely protesting at this.

In this episode, there’s a lot to unpack. Tehmina’s death. How the family covers it up. The impact of Tehmina’s death on Alia. Chammi’s coping with Jamil’s betrayal.

There’s too much slomo for anyone’s liking and they may have overused it by this point but oh well.

In this episode Jamil tells her that he has never loved Chammi – but Chammi tells him that she has always loved him. Chammi seems to have less of love and more of an obsession with Jamil. Mainly because when you are a broken person yourself and you haven’t had the experience of truly experiencing love, love itself becomes a battlefield. To Chammi, this was the one centre where she had placed all her hopes and dreams in. And to see that move away from her is breaking her but she’s choosing to express it in a very Chammi way – by laughing and by crying. Sajal is, as always, extremely compelling.

Madiha Rizvi and Omair Rana gave incredibly powerful performances. The scene where they find out that Tehmina is dead is gut-wrenching.

Tehmina’s character arc is also a telling tale of how ‘honor’ and ‘choice’ becomes the cause of decay in relationships. It even ruins lives. Parents who are obsessed with their own choices and forget to see what their children want, often fall in this trap. Hira Mani, who played Tehmina, posted this on her instagram.