Meet Mudassir Azeemi – The Boy Who Brought Nastaleeq to iOS.

Born in Karachi, Pakistan, Mudassir Azeemi did something incredibly remarkable in the field of technology for the Urdu language. He made it visible.

Not that Urdu wasn’t visible or wasn’t there in various apps and phones – but the shape was wonky. It was Urdu, it read as Urdu but it wasn’t – Urdu. The problem was in the font. Urdu was mostly used in ‘naskh’ or the Arabic script in most phones. Azeemi wrote a letter to Tim Cook explaining this. And brought Nastaleeq, this beautiful font below, to iOS.

Mudassir’s achievement has made Urdu a sight for sore eyes for Urdu connoisseurs. It is more readable, easier and definitely more palatable than the old fonts that most other apps and operating systems use.

What made him do this, I asked him.

“On Steve Jobs’ third death anniversary, Cook sent an email to a lot of tech-related people saying that Jobs created a canvas with which every artist creates their own painting. I emailed him, saying, ‘But where is our brush?’ I got a reply from him within a week.” 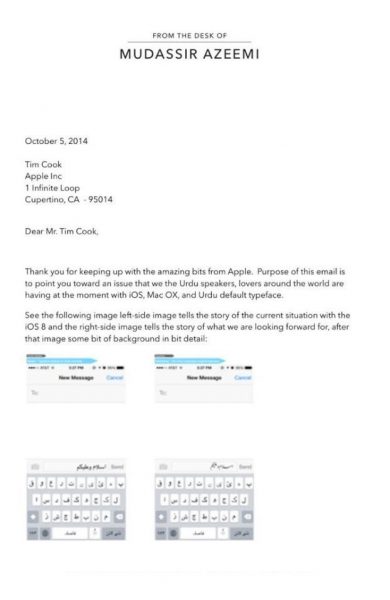 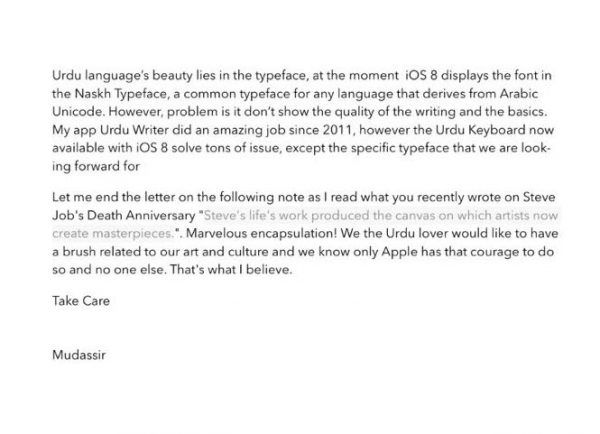 Were you expecting this reply?

I had written thinking of what Steve Jobs had said once. He had talked about a ‘tradition’ of Silicon Valley where if you ask for help, you will definitely get it. Jobs needed a chip and he asked for it from the CEO of HP and he actually got that chip. So I decided to ask. And I got a reply. I wrote him this letter in 2014 and Nastaleeq is finally here on iOS.

Why did it take so long for the font to come to iOS?

It was there since 2015 but in beta version and it was slightly broken as well. It was available to developers since June of this year, but it took time to bring it to the main version.

Do you plan to bring it to other apps and systems as well?

I am trying to contact Facebook and Sundar Pichai to do the same for their apps and platforms. I haven’t gotten much of a response but I will keep bugging them until I get one. I am persistent about this. I want Facebook, Whatsapp and Snapchat to fix their apps and people need to understand the problem with the naskh script so that they can come around to fixing it.

One thought on “Meet Mudassir Azeemi – The Boy Who Brought Nastaleeq to iOS.”