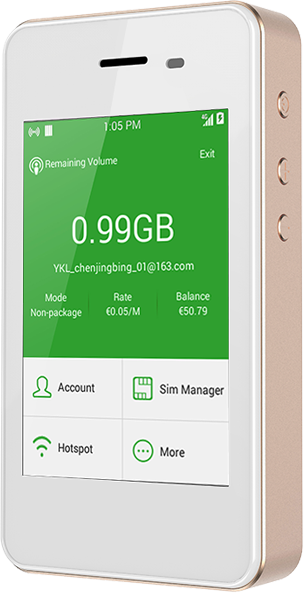 There are plenty of MiFi solutions. There are also plenty of global SIM solutions, that travel well around the world. However, they are often expensive, or come with complicated cost packages. GlocalMe is trying to change all that. Their motto is: Go Global, Pay Local.

In order to try the service out, we were sent one of their new G2 devices, which not only offers the ability to give you a WiFi hotspot, but also acts as a 6000mAh battery pack.

The premise is simple. You travel a lot. Every time you go anywhere outside of Europe, your data rates and charges go through the roof. It is so bad that you stop bothering with using data while on the move, and instead stick to using dodgy hotel and cafe WiFi between meetings. GlocalMe is trying to stop that by giving your very own portable hotspot. It works in over 100 countries, which include popular destinations such as most of Europe, as well as places such as India, the Middle East, Egypt and many other locations.

You can get two different kind of offerings, you can either run it on a limited data package (which is what was sent to us for review), or you can get it on a daily basis, which means you can use unlimited internet, wherever you are.

How much does it cost?

For an unlimited data package and a daily usage, the cost is around $12.99 a day. The currencies we are quoting here are those by the website, so we are sticking with those rather than any GBP equivalents to avoid any confusion.

You can also buy packages that cater to a certain country. These packages come in sizes of 300MB to 3GB, and range from a few euros up to a few 10s.

The G2 is a pretty decent device. It offers 4G data speeds, where available, and if not, it drops to 3G or lower. It allows up to 5 devices to be connected to it at one time, meaning you can connect all of your devices, or share it with your friends, family or business partners.

It also features a couple of SIM slots, meaning you can shift to local data if you need to. Also on offer is a USB port that can charge your devices for you. The device itself charges through a micro USB port.

The device is essentially an Android phone, with a massive battery that also acts as a WiFi Hotspot. The trickery is the fact that it has a built in cloud SIM which connects to the local networks in the 100+ countries it is designed to work in.

The GUI is fairly simple, letting you turn the hotspot on or off, as well as choosing the name of your network as well as the password. All these items are fairly easy to change.

You don’t normally notice it running Android, but a bit of playing with the settings took us to some screens that gave it away.

The device offers a battery life of up to 8 hours with WiFi connected. This should hopefully last you a day, though you can pack in some extra battery packs to make this stretch.

Sadly I wasn’t able to travel around the world with this, but had a chance to travel within the UK. In the UK it connects to the THREE network, and you get as much as they offer. Speed tests revealed decent speeds, and for most part of the day you wouldn’t really notice any different from a regular WiFi.

Extra advantages to having such a device are:

More information on the GlocalMe devices, their offerings, as well as details on how to rent or buy one of these devices can be found on their website.