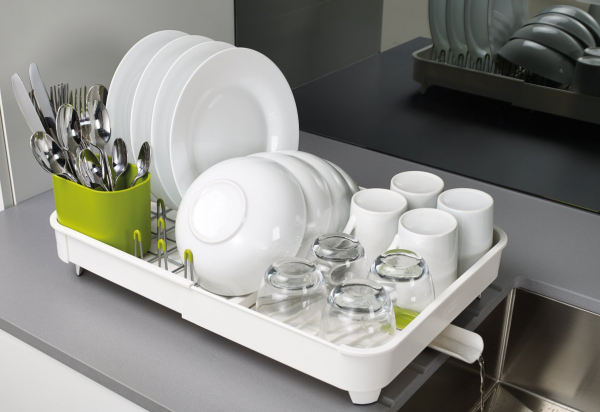 I am a big fan of kitchen gadgets. Sadly, a lot of them are just gimmicks who promise you convenience at some other weird cost. Often, they are rather convenient at things such as slicing, dicing or peeling, but a pain to clean after that first use. Some of them promise a lot at a very cheap price, but the cheap build means they break rather easy. However, do a bit of research and you will find a lot of items that are produced for the kitchen, and while they do not qualify to be called gadgets, they still make your life and your kitchen better.

Joseph Joseph is a company that is known to produce such items. Their simple coloured plastic accessories for kitchens can help anyone. You do have to pay for it though, and that is just how it goes. We noticed the Extend dish drainer at a friend’s house, and really liked it, so got one for ourselves. The idea is simple. Instead of letting your dishes dry and drain all over your surface/sink, this actually has a water spout that helps drain all the water back into the sink. This keeps the water away from your work surfaces, where it may end up causing grime and similar. There is also an extend feature to make the drainer larger or smaller depending on your washing up and your space.

In the box, you get the drainer in two parts, and a little cutlery holder to keep all your cutlery. You simply slide the part with the spout into the other part, and pop the cutlery holder on top, and you’re good to go.

The item itself is fairly sturdy. We went for the white and green one, since it should work better in our kitchen. It looks great now, but I fear it may pick up dirt or grime. Luckily, instructions suggest that you can pop this in the dishwasher, which should give it a decent clean.

The ‘extend’ system works reasonably well. It is pretty much like sliding a drawer in and out, and there is not much more to it.

Steel prongs and non-scratch tips come with a soft feel, which means you should be able to happily pop any kind of cutlery and china on these.

Under it are plastic lines which mean that your cups/mugs/glasses will always be raised, meaning water shouldn’t get trapped under them.

On one end is an integrated spout, which can be tucked away or rotated to open. This can be placed such that spout is above your sink, meaning any drainage from this can go straight into your sink.

The drainage spout can easily be closed or opened as needed.

The unit itself is really stable. You can easily load it up as much or as little as you like and it stays as it is.

This is what makes this one different from the others. I really like the spout mechanism, and it has definitely meant that less cleaning needs to be done under the drainer. However, the drainer itself does seem to hold small amounts of water (collections of few drops) in certain areas. They haven’t gone bad or encouraged any grime.

The spout itself is a great idea, and makes sure the water definitely goes into the sink. It can closed if needed. While this is not something I will use or worry about, I can see applications where you may be in a caravan or out in the open without a sink and where you don’t want to drain your water.

The cutlery drainer does seem to collect a tiny amount of water in its base. This is down to the way it is shaped. There are holes for the water to flow through, and most of it does, but some moisture seems to stick to the walls above them.

While it is bigger than most drainage systems when fully extended, the way it is built means it doesn’t quite hold as many plates as possible. The picture above kind of gives you a good idea of how many plates and bowls you can put on this. 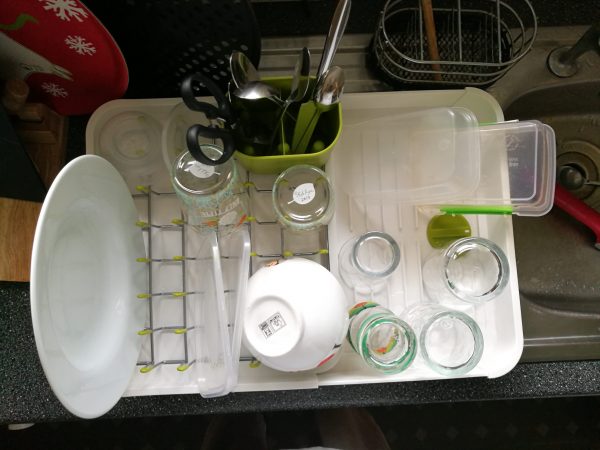 Here is an example of me loading the drainer. As you can see, I could only add another plate or two, and maybe another cup or so to this.

The design itself is more catered towards bowls and glasses/cups, and less towards loading this up with plates and dishes.

So while it takes up more space than a conventional drainer, it definitely seems to hold less number of plates.

More information on the Joseph Joseph Extend can be found on their website. It comes in the white and green option, as pictured above, or a grey option if you prefer your house to be a bit more monochrome.

It retails for around £50, and can be bought directly from their website or online retailers such as Amazon.

It is a bit on the expensive side, and definitely holds less than a standard drainer. However, the cleanliness and neatness it offers instead is definitely worth considering this.