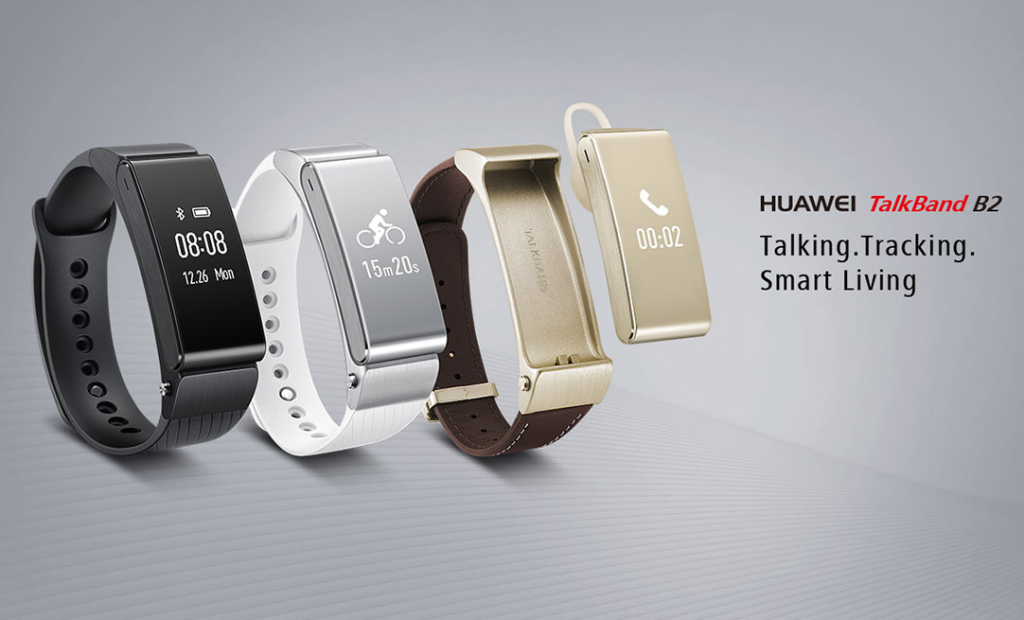 The Huawei TalkBand B2 is an interesting device. Part fitness tracker, part Bluetooth Headset, part teller of time and notifier of calls (not quite a smart watch, but it does not pretend to be one!), this little and nifty device ticks quite a few boxes. It also comes in practical and plastic black to elegant golden and leather packages, looking to attract customers of all sorts.

Here we take a look at this wonderful little concoction, and see if it is worth your time (see what I did there?).

On the face of it, this is a very beautifully designed item. Being thin makes it work more like a bracelet, coming in the same format as your standard Jawbone or Fitbit fitness trackers, but with a screen. The strap that came with the black plastic model, the one we were sent is pretty standard, and looks/feels good.

On the strap is mounted the ‘base’, in which the fitness tracker/headset bit sits. This is made of brushed metal, and looks and feels good, and reasonably solid. On both sides are a couple of release buttons that help you pop the headset out. Inside is the word TALKBAND, for all to view. 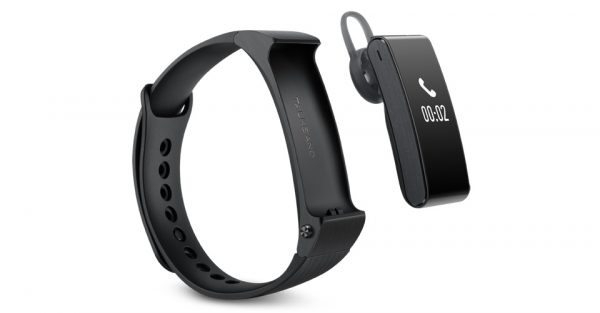 The watch/tracker bit itself, once out of the shell, looks no different to an ordinary Bluetooth headset, although with a display instead of a bunch of Blue and Red LEDs. The right side includes a button as well as microphone holes, while the top of the back has the earpiece/speaker. There is also a micro USB port at the back, which is used to charge the device.

At the base is a little slot where the headset clips into the strap. Since the device knows when it is in and not, there may be some kind of a button/contact here, but it is not quite clearly visible.

As far as the weight goes, at around 30g, and 12g for the headset, it is extremely light, even if it does look a bit chunky in depth on your wrist.

Pairing with your smart phone

I used this on an Android, so the iOS experience may differ, but experience suggests that it isn’t hopefully too different.

Interestingly, unlike any other device of this sort that I have used, this actually suggests you turn it on and pair it with your phone using Bluetooth settings. This makes it more like a Bluetooth headset than a fitness tracker, but since it is clearly stated, nothing wrong with that.

Once paired, you download your Huawei Wear app from your respective store, find your device, and off you.

One major difference between this and other fitness trackers? Since this is also a headset, it pairs with your phone as an audio device. Result? You will not be able to use any other Bluetooth Speaker or headset when this is connected.

The UI is intuitive enough for a device of this sort, though it doesn’t really follow any other standard that has been set.

The display can be made visible by shaking your wrist, turning it towards your eyes or just pressing the side button. Once the display is visible, you can swipe up and down to watch your statistics. You can also view Bluetooth and battery settings. Holding on the watch lets you adjust different watch faces.

The side button can also be used to accept or disconnect calls.

There isn’t much more to it, but not much more is needed, or presented.

The device works quite well as a fitness tracker, in the sense that it tracks your calories, measures your steps, and is so far the only fitness tracker I have tried (I have not tried all of them by any stretch of the word) without a heart rate tracker that knows when you are cycling, so definitely big points for that.

The steps measurement was a bit off, it seemed to always track way more steps than the Basis Peak I was using as a reference point.

Sleep tracking seemed to be fairly similar to what the Basis Peak measured, but once again, since there is no heart rate, it wasn’t as accurate but I wasn’t that bothered. What it does do very well, which not every fitness tracker offers is the smart alarm, which observes your sleep cycles and wakes you up at the best possible time slot. I have used this feature on many devices, and quite like it. Of course, it does not mean that you can just go to sleep at 4am after a night of heavy drinking and wake up refreshed, but it does wake you up when you are in light speed, making the shock of a dark cold morning a little less harsh.

All this data that is collected is then used and presented to you via the app, in a lot better format. The app is designed to compensate for the simplicity of the data presented on the watch.

Other than looking at your health and sleep data, the app can be used to perform various things such as set up reminders, alarms and update firmware on the TalkBand.

It comes with a couple of extra features that are , such as ability to find a lost phone or use this as a shutter button. They are useful, of course, but as I often find not the major part of such devices.

In the aspect of making and taking calls, this isn’t much different from a standard Bluetooth headset, i.e. it fits and sits in your ear, and lets you make and take calls.

Of course, the similarities end there. For example, it sits on your wrist, and not on your ear. When your phone rings, it vibrates, and you can accept a call by popping this out of the bracelet/base.

Once in your ear, it fits surprisingly well, and even on a jog or run, it stayed there, though I didn’t push it. Of course, if you are making a call while walking, you’re perfectly fine.

When it comes to call quality, this is extremely good, and offers noise cancellation on the microphone.

And if you’re wondering how easy it is to pull this out of the band while driving if you get a call? Well, I tried that a few times, and there is definitely a knack to it. I would suggest doing it a bit more carefully, if you must. Definitely not during complex maneuvers.

Since it can be charged via Micro USB, it makes it easier to charge this anywhere. However, battery life is still important. It comes with a rating of 6 days, and it lasted a good 5 days before I had to put it on charge, and this cycle repeated a couple of times, so 5-6 days is a good average for this.

More information on the TalkBand B2 can be found on the Huawei website:

And it can be bought from £99 from Amazon. Interestingly, the golden/leather model seems to be the cheaper option as of now.

I am in a bit of a pickle about this one. There are a few aspects to my conundrum. I like it in all its individual aspects, though one may argue that the price puts it in a vulnerable place compared to some of the other devices. However, it offers more than any other fitness tracker on the market, by giving you a Bluetooth headset.

It all rests on the simple fact, do you want to have a Bluetooth headset sitting on your wrist at all times? And are you okay with your phone not connecting to anything else while you have this on your wrist? If yes, forget everything else, and go for this, and this alone (or the B3, whenever that comes out!).

If the little quirks put you off, you are probably better off trying something else.

If you wear it like I did, with a watch on its side, the occasional ‘action’ can mean the button on this can stay pressed for over a few seconds, turning your device off. Something to look out for!

Tiny tech tip #4: use Google Alerts to be the first to that job, house, story…

Tiny tech tip #3: you can block Ed Sheeran on Spotify