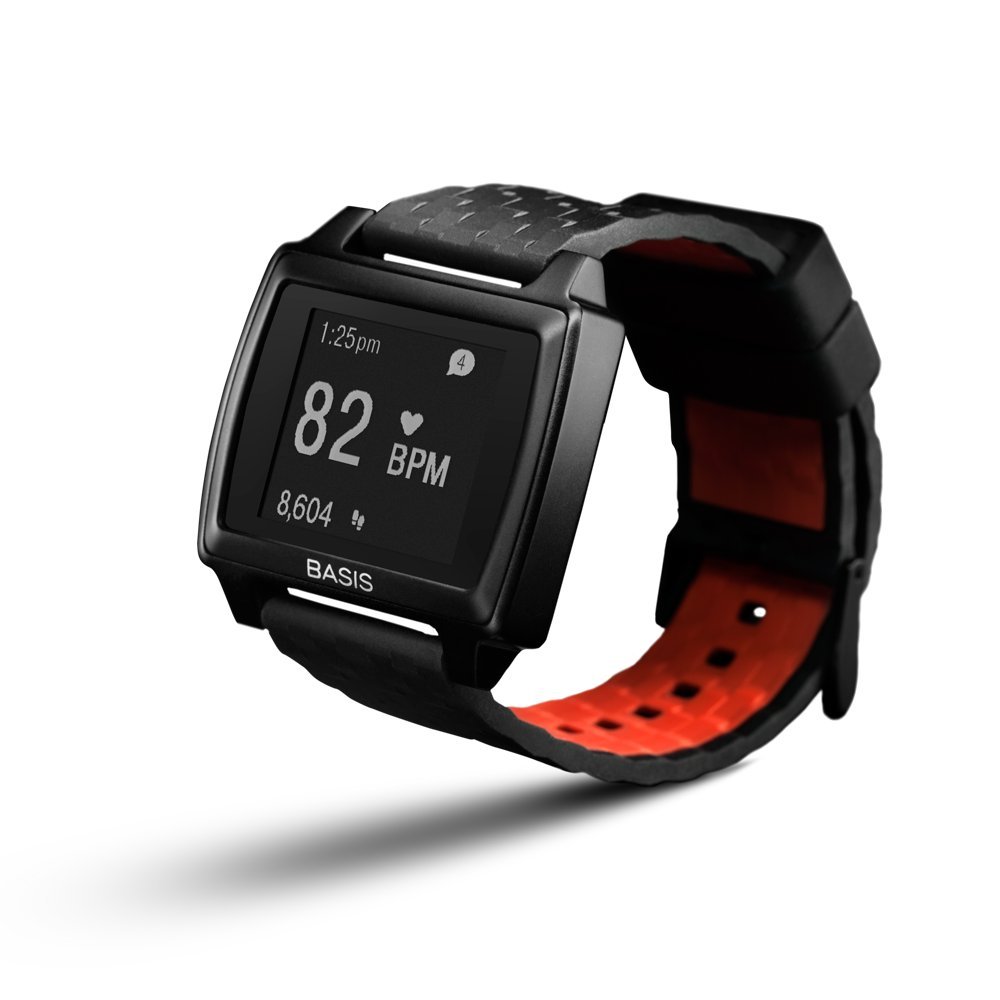 Fitness is the new black these days, and even the usual couch potatoes like me are starting to come out of our caves and go out for a run or two. With this, the world of fitness trackers is becoming more and more populated, with all kinds of devices and wearables. Mobile phones have apps that record your steps, your smart watch is coming with one built in as well, and now a whole host of devices is available that can measure your pulse straight off your wrist rather than the old method of using a belt around your chest.

Basis Peak is one such device. Recently bought by Intel (March 2014), this is the first product they have released to the market, last year and while the uptake has been slow, the device is slowly starting to gain some momentum in the market. With an e-ink screen to tell you time, notifications and your exercise parameters, and a battery life of up to 5 days, this tries to single handedly compete with both smart watches and the many fitness trackers out there. 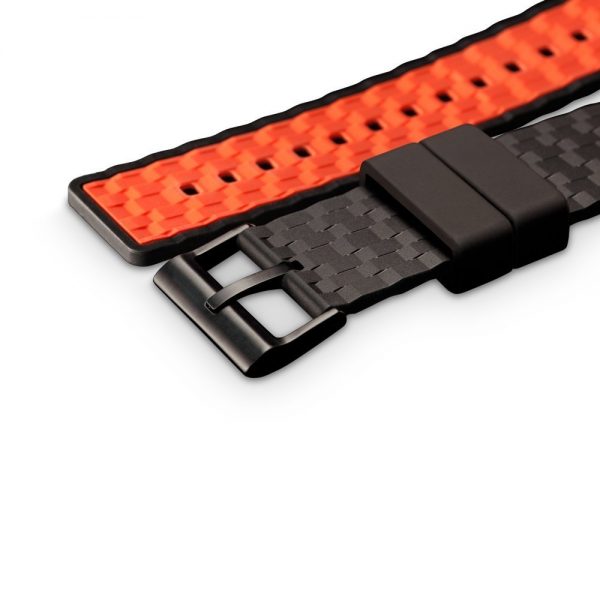 The watch itself is a bit on the chunky side, which isn’t unlike most other devices that come with a heart rate monitor built in, though Basis have done well to keep it looking good. A red and black strap features a textured look, while the bottom features four metallic pads (2 for charging and 2 for magnetic attachment to the charger, I presume) and a couple of green LEDs and optic sensor for your pulse. 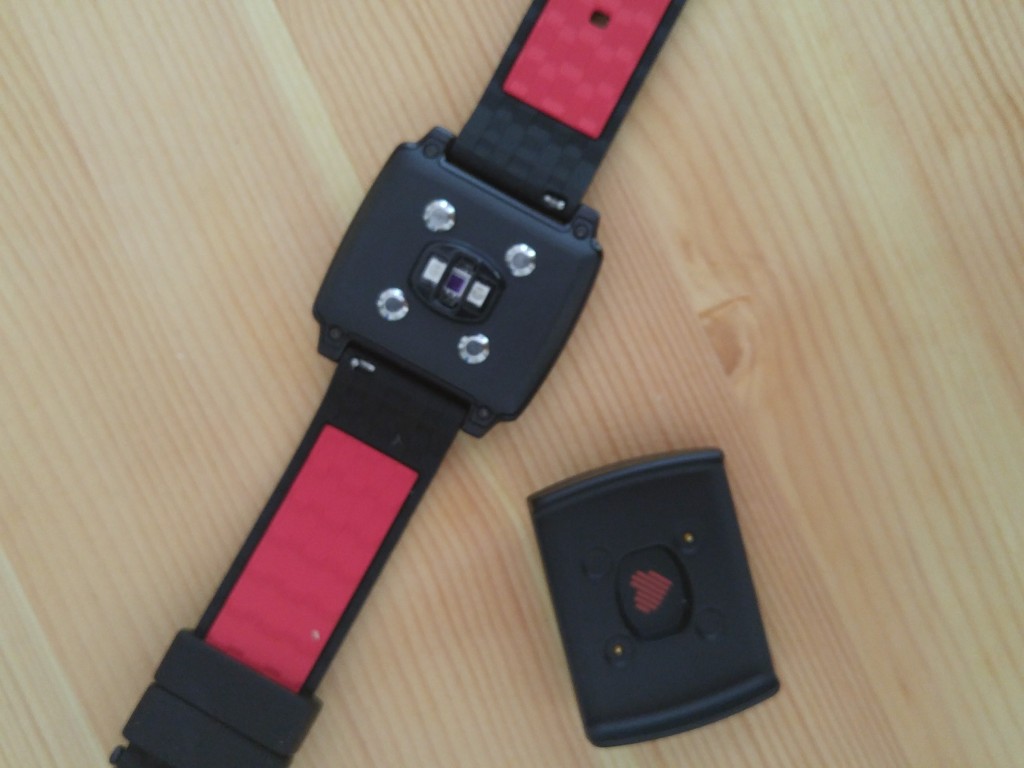 The screen itself is an e-ink touch sensitive display, and the watch has no buttons to push. As such, the UI is totally dependant on your touch and swipes.

If I had to pick one bad thing about this watch, it would be the feel on the wrist. For the pulse measurement to work, the watch needs to be a snug fit on your wrist, and ideally slightly higher than your hand. While the distance from the hand never seemed to be a problem, the fact that the watch had to be tight did end up with some annoying consequences for me. For example, to begin with, I may have had it a bit too tight. As such, this meant that when I did take the watch off later, I had managed to leave permanent marks on my skin for a while. Loosen it, and you end up with no pulse measurement at times. This means that exercise doesn’t get tracked properly. This isn’t a problem most of the time, and you are not really forced to wear this all the time, but it seems like a necessary evil with these kind of watches as of now.

The setup for this watch is fairly basic. You download the Basis Peak app from your Android or iOS store, install it, setup an account, and you’re good to go. Once in the app, you pair with your device, and the rest is done automatically for you. You can setup what notifications you want, things like your profile, etc. 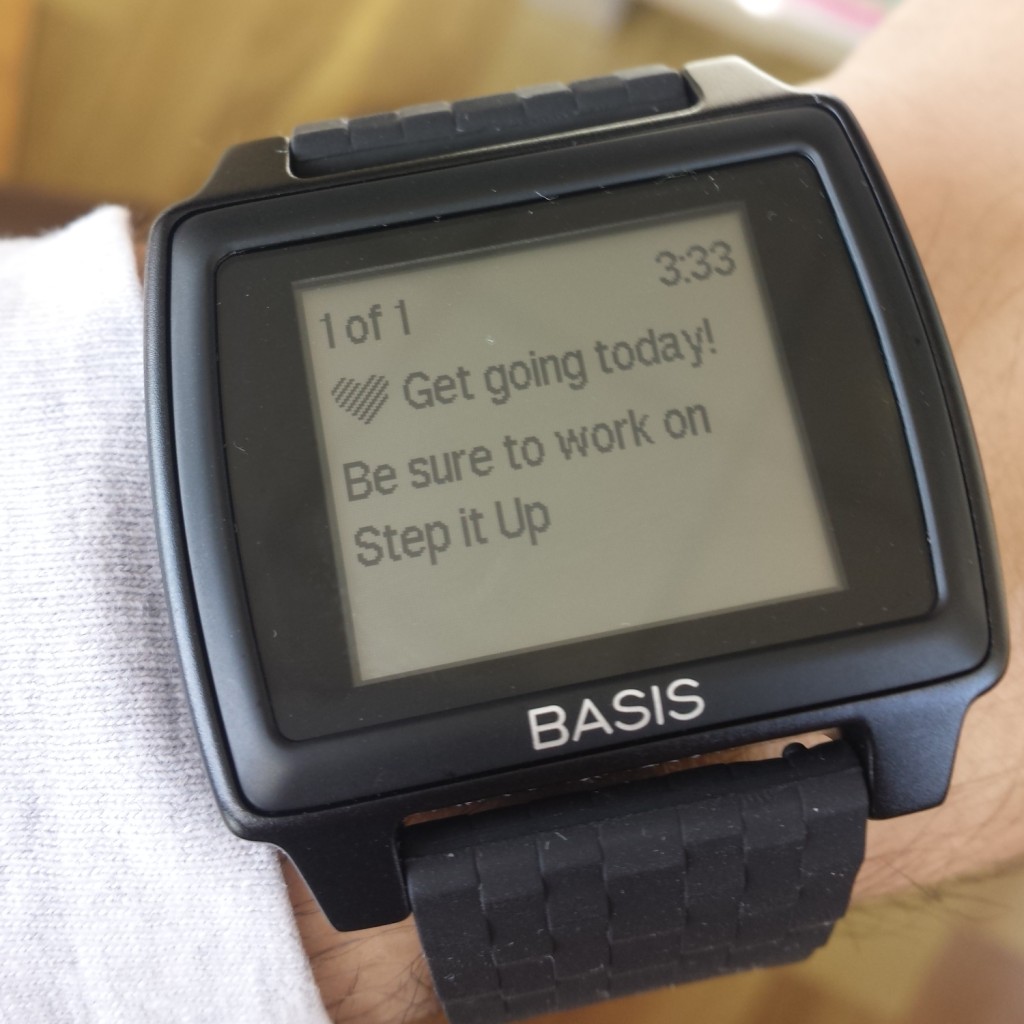 The Basis Peak uses a different approach to getting you to your fitness levels. Instead of forcing you to be active by sending you annoying notifications (well, it does that too), but ideally it tries to create good habits. As such, it wants you to pick up good habits, and keep doing them, day in day out, or at least a few times a week. These include the simple like keeping the watch on for a certain time a day, to the usual goal almost every fitness tracker seems to come built in with, i.e. 10,000 steps. Basis Peak then goes a bit further, trying to get you to pick up the following habits:

To begin with, you are only able to access a couple of habits, and the rest are locked. Fulfilling each habit gives you points, and gives you the ability to unlock more habits. A simple scoring system allows you to feel good, and hence improve your daily  life style.

The watch UI is fairly basic, and it relies purely on your touch and swipes. Generally, you see the watch, which tells you the time in hours and minutes. No seconds display is available. A simple tap on the screen will give you the date and the month.

Swipe right, and you see the options screen that allows you settings such as pairing, or restarting the watch.

Back to clock, and if you swipe up, you see the option to set the alarm, and one more swipe up to use the stop watch.

Swipe left, and you see your pulse, and a swipe up on that screen gives you a total of the day’s activities in terms of steps and calories.

A further swipe left gives you the list of activities in the day, which includes things like walking, running and cycling.

At any stage, a double tap allows you to return to the watch, and dismisses whatever screen you are on, including any notifications.

Reading a few reviews tells me that notifications have come a long way on this watch. You have the option to be notified when you get a text or a phone call, and that is how it was untill recently. Now, however, you can get notifications from your messaging apps (I have used Whatsapp and Hangouts to test), as well as emails. Essentially, it gives me all the notifications I have needed from a smart watch, and in that aspect it works brilliantly.

Each notification is given via the screen and a gentle vibration. There are no settings to adjust this vibration, but it is rather gentle and pleasant.

The Silent Alarm, once again referring to the reviews I had read before I got this watch, was one of the most wanted feature on this. Everybody wanted it, and half way through my review, I get an email from Basis talking about how the Silent Alarm is now available on the watch.

By the way, a silent alarm is a vibrating alarm, such that your partner doesn’t wake up. Some fitness trackers, specially ones with heart rate monitors built in, do it more intelligently, and wake you at the right stage of your sleep cycle within minutes of your alarm time. The alarm on this doesn’t work like that, and it just wakes you up when you ask it to.

The setup for it is fairly basic, and it works via the watch. It doesn’t allow you to choose which weekdays you want, and for that it gets a thumbs down from me.

However, if you need the feature, it is there to be used.

Like all devices, this comes with some quirks. The ones on this are mostly surrounded around exercise.

First of all, if the watch is loose on your wrist, it may not track your activity as well as you’d hope. The activities are mostly tracked on your heart rate, and if that is missing, the watch assumes no activity, or just doesn’t track it properly.

Secondly, which is more annoying, if you are on a run, a bike ride, or even a walk, and you stop at a red light to cross the road, or just stop to have a chat or take a picture, it stops tracking that activity. A minute or so later, when you start again, it starts a new activity. So your hour long bike ride may be broken into chunks of 3 or 4.

This becomes increasingly annoying for when you are trying to achieve the habit of being ‘active for an hour’ etc. 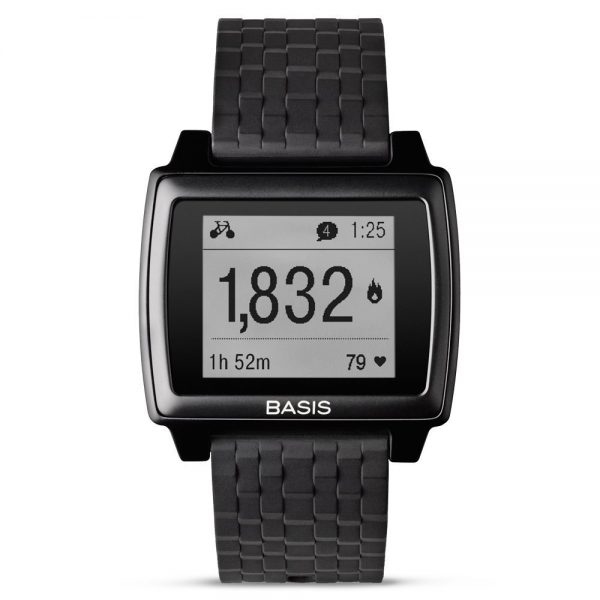 Probably the best bit of this fitness tracker is the fact that it can automatically log cycling. It just knows when you are cycling, and while the data and tracking relies on your heart rate monitor, it works really well, and for that I am impressed. Of course, being in Oxford means I cycle a lot, and it is good to know I have been burning some calories and getting some exercise when it is tracked.

Walking and running was an interesting one with this one. It looks at both as good activities, though I found that it often tracked my (obviously very slow) running or jogging as walking. Maybe my heart rate wasn’t high enough, or I wasn’t moving fast enough. Either way, specially when I do my run-walk-run stints, it logs them as separate activities, and somehow more walking then running.

Well, I am including this for the sake of completeness, but I haven’t tried it while swimming and I can’t find any data on it. However, I imagine it should log it much like it logs cycling, as it should be dependant on your heart rate. The watch itself is rated for such water immersion. However, the touch screen doesn’t work very well under water, or in showers.

Sleep monitoring is another element that this watch offers, and once again, you don’t have to do anything, and it just works. It works well most of the time, and monitors different sleep cycles (light, REM, deep) to good affect (or so I hope). It also monitors tossing and turning, which I found interesting.

At an occasion or two, it did think I was asleep when I wasn’t, though I was in a highly relaxed state then (like an afternoon lie in the sun).

The app is fairly basic, and gives you all the data. It doesn’t integrate with other apps like RunKeeper, which would be a high on my list of ‘wants’, but it does. If you want more, you can log in to your account via the website (http://www.mybasis.com/) and see the data in much more detail.

Battery Life comes rated at 5 days, and it did not disappoint. It recommends charging the device for at least 15 minutes every day to beat that, and I often ended up doing that while I was in the shower, and it works well in that regard.

So, with all its features, does it act like a smart watch? It does for me. My usual smart watch is the classic Pebble, which I love for its simplicity and notifications. This gives me all the notifications, and adds detailed fitness tracking to it. It doesn’t, however, show me weather.

I’d say, if you want a basic smart watch that gives you notifications, and tracks fitness, this is probably one of the best ones out there.

More information on this device can be found on their website:

It can be bought in the UK from the likes of Amazon:

It retails for £164, and is available in black/matte and white.

Apart from not generally liking it being bound tightly on my wrist for activities, I can’t really complain much. With a cost just over £150, it packs in a whole host of features and manages to look good while doing it.

This is my new watch!