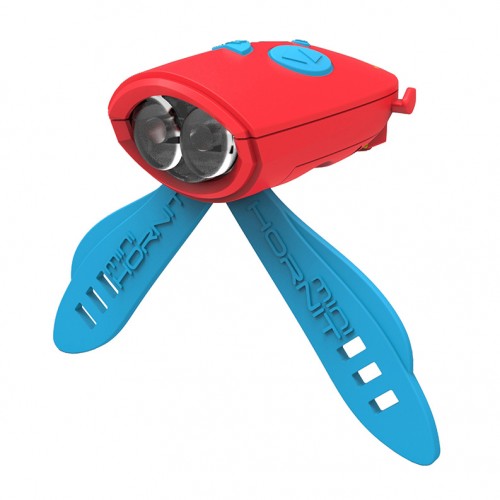 Last year I reviewed this weird and wonderful bicycle accessory called the Hornit, what claimed to be the world’s loudest horn. Interesting and fun as I found it to be, I found it lacking in one department. I wanted it to have a light!

Hornit are back, and this time they are focusing on the little ones, with their new device called the Mini Hornit, and this time, it does have a light! More information on this can be found at the following feature video:

So, what is it? A fancy bicycle light/horn combination which comes in a variety of colours, and offers light as well as different sounds, so much so that it can definitely act as a toy. The biggest advantage of this is that it is a device that not only will kids be encouraged to use, they will also not want to leave it behind.

The device runs on 2 x AAA batteries, which are included. It comes with a couple of wings, which can be used to attach it to any handlebar (or similar styled part). On top are a range of buttons, while the bottom allows you to plug in an extension, a remote trigger, to ring your bell. The front features bug-eyed lights, to go with the whole ‘hornit’ theme! It also comes in four colours, at least one to suit anyone, even adults!

As can be seen from the image above, the usage is fairly straight forward. The device comes with various buttons, that can be used to cycle through light settings, and an immense 25 different kind of bell sounds. It also offers various volume settings, so you can change the volume of your device depending on how good or bad the traffic is. Obviously, in the hands of kids, it can be anywhere between a fascinating toy, to something you may find annoying. However, you wouldn’t mind them being loud and bright if they are out and about! 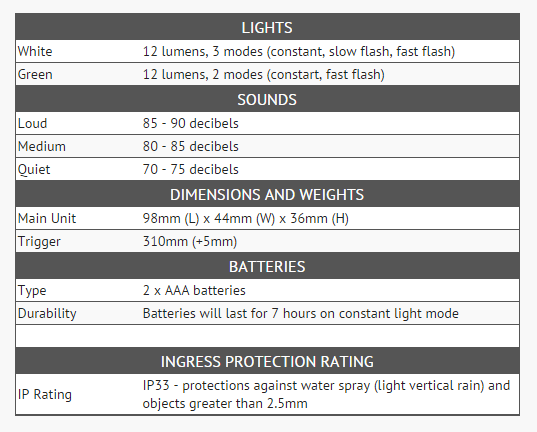 After initial playing, this device became my constant light, and I absolutely loved it.

Then, a lot of rain happened! Unfortunately, this is where I discovered that this device, while it can withstand a light spray as per the data above, cannot really be left out in the rain, at least not for long. My Mini-Hornit died, and I have tried letting it dry out, and replaced batteries, but all to no avail. Guess this is why it is easy to attach and detach, so that you don’t leave it out in the rain. However, as a parent, I think it is something to be quite vary of, i.e. if you rely on this device to give your kids light and sound, it may fail if exposed to rain.

All in all though, it is an impressive device, which makes the point above even more disappointing. I hope that future versions will go up to at least IP5X or maybe even IP43, to give it a bit more protection.

It retails for £19.99, which puts it at a very nice price point for bicycle accessories. You have to be careful of rain, which is a bit difficult in UK, but at least if you remember to detach it every time you’re done, it should keep running.

After being in touch with the Hornit team about the issue, they suggested I press the back button for three seconds to ‘reset’ the device. It beeped, came alive, and then died again. They suggested I change batteries, following that, and that seemed to work for me.

The device did not work when I originally changed the batteries, which should have caused a reset, but a combination of the two made the device work. Interesting, though not entirely sure of the device. Will monitor it more to see how it behaves over the next few days!

One thought on “Review: Mini Hornit”