Probably the one thing I found the Kobo Aura, which I reviewed almost exactly a year ago, needed the most was the ability to be waterproof. Kobo have heard me, and they have only gone and made a waterproof eReader.

I had some initial play time with this in Germany, at IFA, where I had the chance to talk the Kobo team. The device is an upgrade on the original Kobo Aura, and apart from the waterproof to the IP67 rating, the changes are minimal, subtle, and it works, just like before. Some of the changes over last year’s device are things such as the back cover, which is now a different anti-slip texture, the light can not be adjusted by the two finger up and down swipe any more (I’ll miss that!), and you’re looking at a better, 265 dpi, resolution.

So, lets talk the waterproof setting, after all this is what it is all about. The device is rated to IP67, which promises it to be safe at a depth of 1m for up to 30 minutes. This means that you can sit by the beach, the pool, or in your bath, and let your device take you away as you indulge in your favourite book. A splash of water should not be an inconvenience any more! 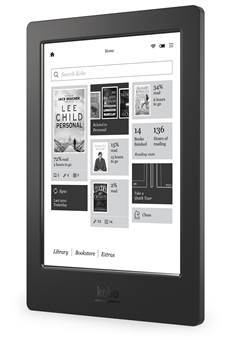 Water though, does affect the touch screen’s performance, so much like all the other waterproof devices out there, one has to really be in the dry to use the touch screen properly.

What about rest of the experience? It is pretty much the same. You get the library with 4 million books, with the option of 4GB built in memory as well as the option to expand up to 32 GB using micro SD card. You can also transfer books via a micro USB cable, which is also used to charge the device. And while the 4 million books does not compete well with the competition, the ability to expand memory, as well as read more file types on this device kind of gives it the edge. For example, I just copied a comic file (.CBZ and .CBR) to view on this device, and get an amazing experience!

Talking of charging, you get about 2 months of usage out of a single charge.

Of course, you also get a light to read in the dark, and this can easily be adjusted using the light setting.

It offers you more than reading too, such as a built in dictionary, social apps, a browser and some games, though it definitely works the best as a reader.

More information, as well as buying option can be found at the following link: