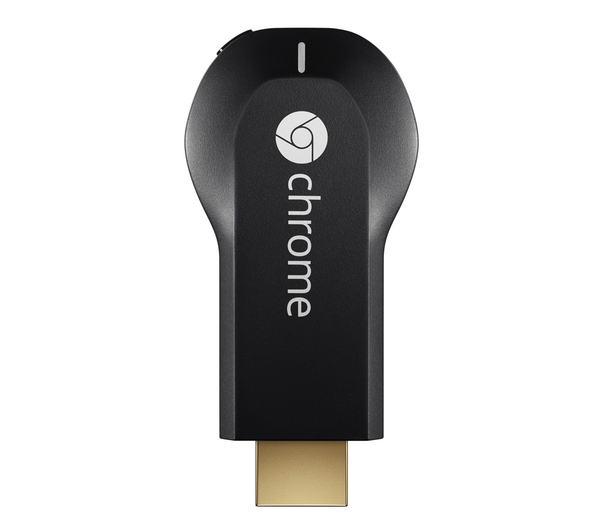 Google Chromecast was all the rage last year. Available exclusively in the USA, this was Google’s surprise reveal, and came with a promise to kill many online webstreaming services, such as Roku, Apple TV, and the like. With the price being only $35, there was nothing for you to lose apart from an HDMI slot on your telly (or monitor) and a bit of bandwidth on your WiFi network.

There was the promise that the device will be available in the UK later on, and that later on has finally happened! Available from Currys for just £30, it has definitely delivered on the price promise. But how good is this magical little dongle, and what can it really do? We take a look!

This small HDMI dongle from Google connects to the internet via WiFi, and streams content from your Android, iOS or Chrome Browser running device to your television, or whatever you have plugged the dongle into. While content can be transmitted directly from your device, if using a proper compatible app it will cast directly from the internet, instead of relying on your device to run it.

Included in the box is the Chromecast, an HDMI extender in case your HDMI slot is tightly packed (very often the case), a long micro USB to USB cable and a wall charger. The micro USB cable/wall charger combo is in case your HDMI port cannot power the device. I have tried it on a couple of tellys, one being LG and another a cheaper brand and it failed on both. However, you can normally plug the USB cable in the USB port of most televisions these days, and that setup works perfectly.

Sadly the charger provided provides 850mA. This means that it is at an awkward power output that doesn’t quite charge your smart phones or tablets, but will be okay for smaller devices.

For something that will probably be hidden away most of the time, it is quite a good looking device, or as good looking as such a device can be. Shapped like a USB dongle, with a swollen bud on the other end, this fits in perfectly.

An LED lets you know about power and connectivity, while a small button on the side lets you boot this in USB mode, or allow Factory Data Reset. Generally the button should not be used. Right next to the button is the micro USB port, which is used to power this.

Setup is fairly simple, and can be done using your computer, Android device or iOS device. It is advisable to download the app for either.

You plug this, run the app, and it searches for your device. During this time, the Chromecast creates it own WiFi which is then found by your device. After you have verified the device code on your television and app, you enter your own WiFi details, and then the Chromecast connects to your WiFi.

That is it really. We did have some trouble getting the WiFi sorted when trying to connect via a laptop, and then the laptop had trouble accessing regular WiFi as well, so I imagine that might be something on the laptop end. A restart sorted the laptop out, while by then we had already managed to set this up using our Android device (a Samsung Galaxy S4 in this case).

Once set up, you are ready to go. The following apps are fully compatible with the Chromecast, and by that we mean that when you are watching a video in any of those, a small button on the video lets you cast it directly to your television.

So if you’re ever about to watch an iPlayer video, or a video from either of the above apps, just hit the cast button and as if by magic,  it appears on your television.

More so, the idea is that your device is only controlling the Chromecast. The Chromecast itself gets the content directly from the internet, so if you were to walk off or anything, that should not get in the way of watching your media. How well it works is of course limited by the connection speed as well as quality.

Ease of use – apps

As mentioned before, the device is fairly easy to use once setup. Just click on any of these apps while you’re on your network, and when you get to the video bit, just hit the cast button and choose your Chromecast (in case you have more than one). After that the video just appears on your television. You can put videos in a queue as well, which is good if you want to run a playlist or put some things together.

Oh yes, it doesn’t just stop at video. There are apps to doodle, play games, and have other fun. Some of them are the following:

These apps will need to be installed on your Android/iOS device.

The only proper way to stream from a computer, unless it is acting as a media server for Plex (or similar) is using the (still beta) extension available on Google’s Chrome Browser. Any tab can be ‘cast’, and unlike other apps, this comes directly from your computer, and once again will require a decent WiFi connection. While this is really straight forward to use, there is a very slight delay which you may be notice. So yeah, if you want to your television as a wireless screen, it will work, but that slight delay (more noticeable while typing or scrolling) will make its presence known.

Having said that, this is probably my favourite feature of the Chromecast. Mainly because the other apps may come with a lot of smart TVs, but this one is unique to the Chromecast.

Talking of unique, this only works with the Chrome browser.

As mentioned before, this is available from Currys for £30, and can be bought from the following link:

At £30, what do you really have to lose? A smart device that can turn a non-smart television smart. While it is clever, and small, and extremely cheap compared to the competition, the lack of ability for it to run on its own does leave a little to be desired. Having said that, I am not removing this from my TV quite yet.