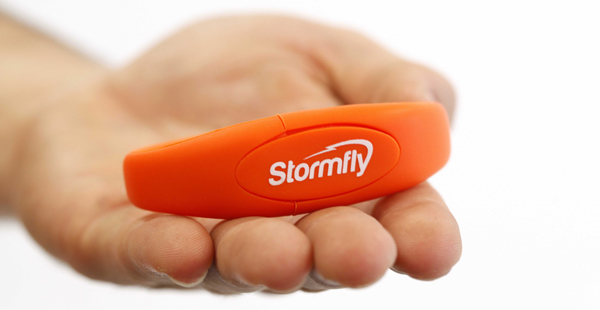 We live in a world where portable computing is all the rage. From laptops that are getting smaller and thinner to our obsession of answering emails via Blackberries, tablets and smart phones means that we all need portable computing. However, not all devices are without their issues. Laptops cannot easily be carried around, and when you do, you tend to be a bit worried about their security. Tablets and smartphones have their limitations, and the touch screen often gets in the way of typing.

There are other reasons for portable computing too, for when you want to keep your data with you, or just the fact that you want to have an OS that is independent of what generally runs on your computer.

All these problems have been attempted to be solved by StormFly, which packs in an Ubuntu OS in a USB drive, which can then be booted off of any computer to let it run your own unique operating system. It runs  Ubuntu, and while it is not the latest version it is good enough for most uses. And since you get full Ubuntu, you will still have the ability to install any programs you may need for work, your browser bookmarks, your email setup, and literally anything else that runs on Ubuntu.

Simple really. Make sure your ‘host’ device has the ability to boot off of USB. If yes, then just plug this into a USB port of your PC or MAC, boot it, and it should boot in the Ubuntu mode. Once booted, just get about doing what you would. After you finish and shut down, take your Stormfly with you, and plug it into any other computer to get back to where you were.

The Stormfly comes as a strap, in orange or black colours. Cleverly hidden in the strap is a USB key, which stores 16GB (or 32GB) of space, with USB 3.0 connectivity.

The strap, however, seems to have been designed with kids in mind, as it doesn’t really go around my wrist. And I hate to admit it, but I don’t really have the manliest of wrists.

So, yeah, while the functionality is all there, if you hoped to carry this around with you on your wrist, you may be a bit disappointed.

If you do try hard enough (not too hard, actually) you can pull out the USB key from the housing, but I won’t recommend it as you may lose it in the process.

Stormfly comes with Ubuntu, and the good thing about this is that during setup it installs some basic items such as Flash player, VLC player, and the likes. The kind of things one would normally struggle to find if one doesn’t know much about how Ubuntu works. A browser is provided by Mozilla (couldn’t get Chrome to work), and Thunderbird is the email client that comes packed with the device. As already mentioned, this is limited only by what Ubuntu doesn’t run.

The recommended usage by the manufacturer is for families, for kids and for educational purposes. The idea of having a ‘separate’ OS in your pocket is a pleasing one, specially to anybody who has had to deal with IT issues. A simple wrong download can cause a plethora of problems, and this can help you avoid those.

Also, kids can have their homework and such like on this OS, and if they don’t finish at school/college/university, they can always continue where they left off once they get to another place with a working computer.

Another usage could be for the IT nerd, who may need something like this to boot a computer in case the hard drive is damaged.

This can also be used for experimenting with various applications, which is one of the joys of having Ubuntu.

If you’re the type who uses virtual machines, this could be a handy alternative.

The device connects to your computer via USB 3.0. This means that when the system runs, it runs off of USB 3.0 speeds. Of course, it does mean that to get the full speed out of it, you will need to have a device with a USB 3.0 port available.

Also included in the Stormfly is portable storage in the form of an SSD, so you may use this as a USB disk too. This is where having the USB 3.0 really helps.

Of course, the device has certain obvious limitations, but I thought I’d mention them anyway:

The Stormfly is available from Roobix.co.uk at the following link:

An interesting concept, which may become the norm in the future, or might just become a niche in the education industry. Either way, a useful concept and  a handy little device to keep with you.