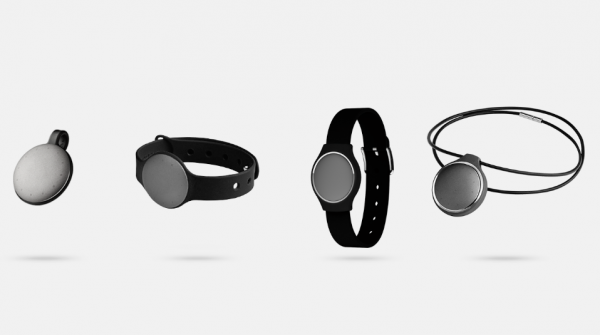 The Shine by Misfit Wearables is a fitness device that can be worn in many ways, as a watch, as a bracelet, clipped on to your shoes or shirt, or as a necklace. It monitors your daily activity, and can be configured to monitor specific sport activities (such as football, tennis, swimming, cycling), or your sleep. It gives you feedback via a set of LEDs on the front, and syncs with iPad/iPhone apps as well as Androids.

The Shine definitely is the best looking fitness accessory out there. Made out of machined steel and aluminium, with a brushed finish, it definitely looks the part. A groove around it lets you attach it to straps or necklaces, while the LEDs on the front give you various feedbacks such as daily progress, or the time of the day. It does not weigh much at all, and you will hardly notice it once you wear it.

Pairing on the iPad/iPhone was a simple enough affair. You download the app, and you place the device on the screen (as it advises you), and it pairs. The need to place the device on the phone/tablet is to make sure that it is close enough to the Bluetooth sensor/receiver on the device. Once paired, it will automatically sync, at a distance with your device, and upload your information to the servers.

Sadly, pairing with the Android is not quite a simple affair. In fact, the Android app leaves a lot to be desired. The difficult in pairing is probably because different Android phones have a different layout and you have to hold the device on the back, next to the phone to pair it. I tried it on a couple, and it took me ages before I figured it out.

I thought I’d talk about the Android app before I mention the iPad/iPhone one. Mainly because this gives you the basics, but not much more. It measures your activity, allows you to configure your shine, adjust your goal, so it does it all, but somehow the app has a very beta feel to it, and is a bit hit and miss. Also, after syncing with the app, the clock on the shine went an hour ahead.

This, despite giving you the same basic features as above, just works a lot better. You see your daily routines, how you have improved, and it lays out the data a lot better than you. Syncing is also seemless, and so are the options. Some of the options you get:

Also included in Shine is a watch feature, and while it is slower than looking at a watch, it does have that TokyoFlash magic about it that lets you see the time. To do so, you need to enable the clock feature from within the app, and decide whether you want to see the time before or after you have seen your progress for the day. After that, just double tap your device, and the LEDs will shine to let you know the time. It is important to align the 12 (shown in the image) on the back up right properly, so that when you read the time, it is shown as you would expect it.

The time first shows you the four quadrants, followed by a solid bright LED on the hour it is, and then by a blinking LED to the nearest 5 minute interval it is. It may take 5 seconds to read the time, but it is legible!

Can I analyse my data on the web?

Sadly, data analysis is something that is quite limited on the shine. It doesn’t come with a supported website, and while you can share your progress on the likes of Facebook, it isn’t quite as social as the competition.

This is something that sets it aside from the competition though. Being fully waterproof, this is probably the best device to monitor your progress if swimming is one of your main activities.

The device can differentiate between the likes of walking, running, cycling, swimming, and sleep, but apart from the first two, you have to tell  it that you are performing a certain activity. Also, only one activity can be configured at one time, and you have to change the activity of choice through the app. This can be a bit cumbersome, but it works. To activate the monitor, you tap on the device three times, and off you go. It also suggests where you wear the device for different activities, which may or may not be a good thing, depending on your activity and how much you can be bothered.

While you get points, and are scored on them, it will tell you how many miles you have walked or how many steps you have taken. There is no calorie monitor though.

The sleep tracker is a fairly handy feature of the device, but the results you get are basic. You find out the times you slept, if you woke up, and the times you had deep sleep.

As of now, Shine lacks a bit in features. However, a little research on the internet suggests that they will be opening their API, meaning that a lot of people will be able to add their own features. Once sorted, this could really add to this device.

The Shine runs on a CR2032 battery, which makes them easily available. The battery is supposed to last 4 months, and while we haven’t exhausted this option, it makes it easier to use than some of the competition.

More information on the device can be found at the following website:

You can also buy the device directly from the website, or from various retailers. It retails for about £99.

You can also get it from Amazon at the following link:

The Shine is definitely more of a fashion statement than a functional one, but this is what makes it different from the lot. It looks good, and gives you a fair amount of functionality. The Android app and the data analysis definitely needs some work, but with an open API, this should hopefully be not too far.