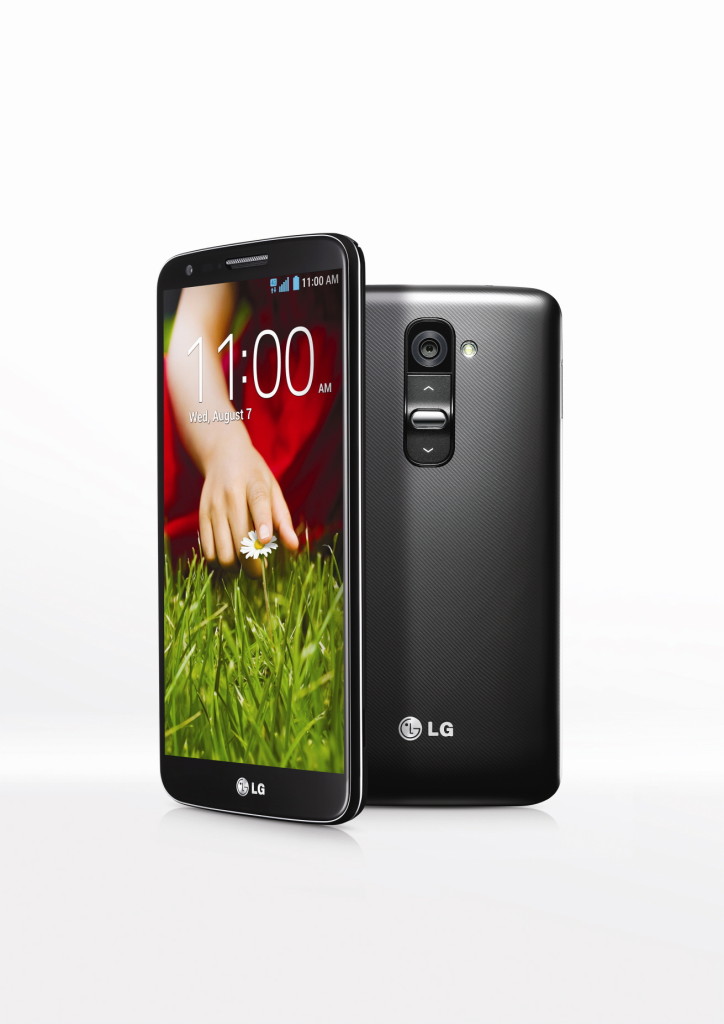 When the LG G2 was announced earlier this year, it had one goal in mind. To be different from the rest. To do so, they changed a few things that are generally on offer on most phones, such as putting the power and volume buttons on the back, as well as added quite a few features to the general Android OS we have all become so used to. Did they succeed? We think so, but read on to find out more.

Yes. While one may think of Samsung, and the much lesser successful HTC as the giants of Android phones, it is LG that produced Google’s Nexus 4 and 5 phones, one of the most successful phones ever produced. They sold out within hours, and the Nexus 4 was in demand till the Nexus 5 was announced.

So is this another Nexus?

No. Not at all. Before they announced the LG G Flex, this was (and as far as the market in the UK goes, still is) the best phone from LG. In fact, it has already won some awards, and the G2 is almost the exact opposite of what the Nexus was. While the Nexus cut costs, and put a great package in a good enough body with a good enough camera, the LG G2 is all about the premium and the best.

If you haven’t noticed already, we were quite impressed with this phone. The phone supports a 5.2 inch screen, which has a full HD resolution. A very thin bezel can be seen on both sides, while the top and bottom leave just enough room to squeeze the speaker on top and the LG logo at the bottom. The phone itself is fairly thin, and you don’t find any buttons on the sides, top or bottom. The bottom has ports for charging and the 3.5mm socket. The back is where the difference happens, as you notice the power button and the volume keys. Above them is the camera and the flash, and other information can also be found on the back such as CE logos and such like.

The phone feels solid in your hand, and has a good weight to it. The back doesn’t come off, and you can only squeeze the SIM in through one of those slots we have become so used to now. It is definitely big, which means holding it and using it can be interesting, but with the likes of Note out there, this isn’t a surprise any more.

There is a multi colour notification LED in front, as well as a white LED that surrounds the power button on the back. The front gives you various alerts, and is configurable, while the back only seems to give you a power notification.

The screen is probably one of the most impressive ones we have seen on any device at the moment. Beautiful colours, natural tones, not too sharp, not too saturated. Just right. The thin bezels also mean that you get all the phone’s worth as a screen, and don’t waste any space.

The back buttons were probably the biggest gamble by LG as far as this phone goes, and I imagine they class it as a success as now you can see it on the likes of LG G Flex as well. Others have tried to implement similar on their phones as well, so it isn’t quite bad a thing. What LG did is that they removed the power and the volume keys from the side, and placed them at the back. This means that you can now use your index finger while holding the phone to access those buttons.

But what if the phone is lying on a table? You can use Knock On to double tap on the screen, and this will wake the phone up.

The back buttons are something that definitely take some getting used to, but they are not as crazy as they feel at the start. Much like most phones, you develop muscle memory, and then the back buttons become as natural as anything else.

Is this another Android phone? No. LG have packed in quite a few features on top of the traditional Android, and while generally we don’t like any additions to Android, LG have somehow gone and improved the whole experience. This means that you have extra features, and we quite like them. Here are some of the ones that we found quite useful.

Something that used to be normal on Blackberries, and then recently introduced on the Lumia range. You double tap the phone, and it wakes up the phone.

By default the keyboard on the LG G2 is as wide as the screen, but you can configure it for one handed use, where the keyboard gets shifted to whichever hand you prefer.

This one I quite like. Notifications for calls and texts appear as pop ups, which mean you can answer calls or texts there and then rather than having to change from one app to another. 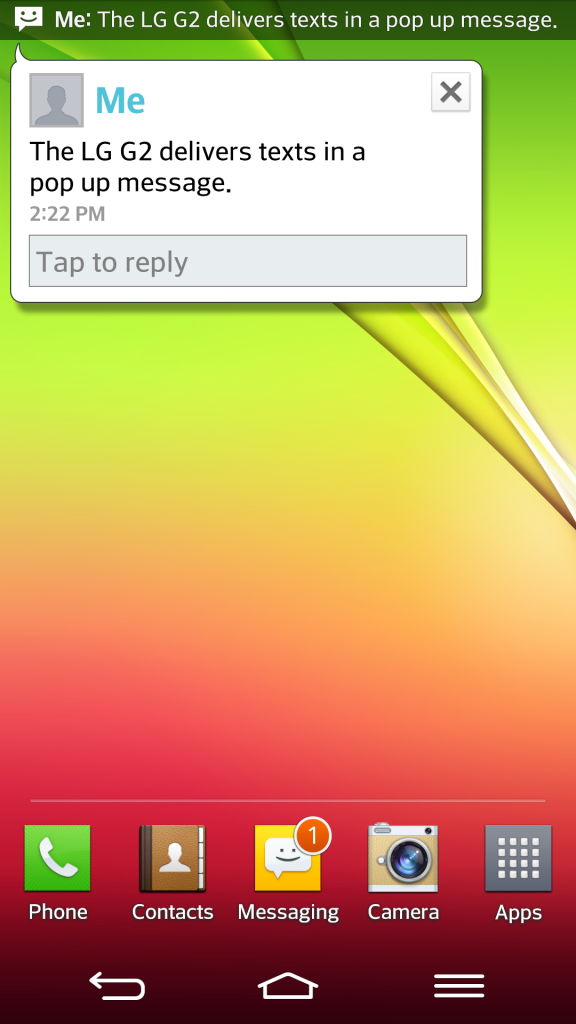 Another little feature which I quite liked was the clip tray. Copy pasting is bit of an annoying thing to do on touch screens, and Microsoft Word’s Clip Tray is something we sorely miss whenever we are doing some serious work on the touch screen devices of today. LG have introduced the clip tray, which means everything you copy gets stored in there, and you can access it later. The whole feature also seems to run more smoothly than general Android, and it uses text instead of icons to indicate what it does. All in all, a very handy feature.

Another thing that LG have added is the Quick Slide feature. Your notification panel has a quick slide menu, and anything you click on will appear on your desktop over the app you were using, and you can adjust the transparency of it. Much like the LG G Flex, if you take it to the corner of the screen, it will appear as a small icon which can be opened up again if required. This is clever, and while it was useful for note taking and sending calls and texts, it didn’t quite impress us as much.

Android has always talked about multi-tasking, but hasn’t quite offered it in its truest form. The Note has provided you with multiple screens, and that only works on a big screen. The LG G2 has another way to do it, and if you have an app open, you swipe it sideways using three fingers, and it is stored in its current state. You can store away a lot of such apps mid-usage, and then retrieve whichever one you want to use without losing anything. Once again very hand for any note making or documenting, specially combined with the clever Clip Tray.

As we mentioned earlier, we do not like it when people add their own ‘magic’ on top of Android. The LG has definitely changed that, as this is the first time we actually like all the little additions they have made. Yeah, it still takes up power from the processor, but with such a powerful device, we did not feel any difference at all, and if you think additions to Android were bad, prepare to be amazed. It is all subtle, non-intrusive, and it works for you, rather than slow you down. Well done LG!

Another thing where this phone seriously impressed us was the camera. It packs in a 13MP camera with OIS, and it really impressed us. Most phone cameras struggle at night, apart from the likes of Lumia 925 and 1020, and believe it or not, this is right up there with them. Here are some of the images we took.

The following show Banbury station taken from the bridge at different times. The last one shows it using HDR, while facing the sun. 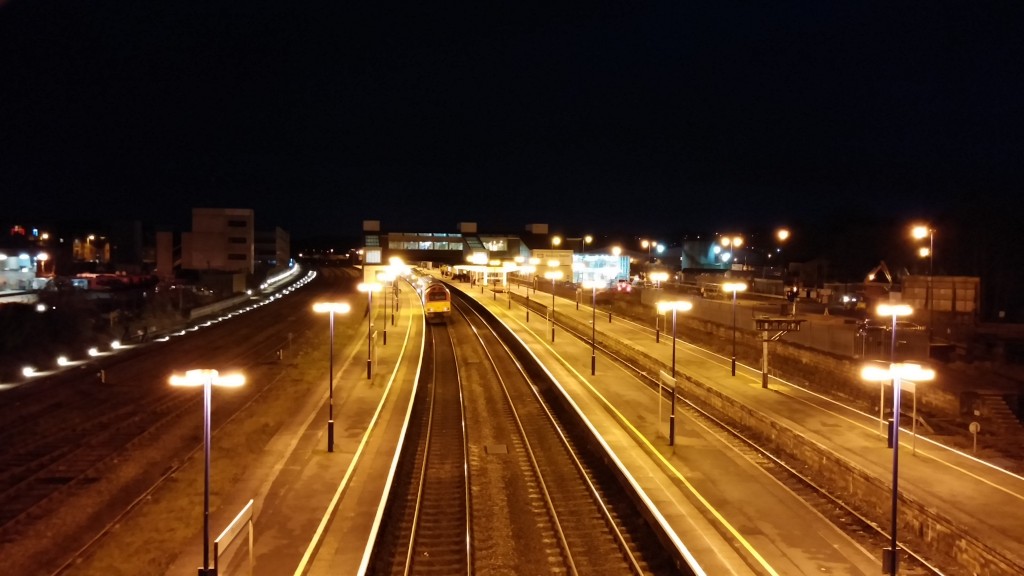 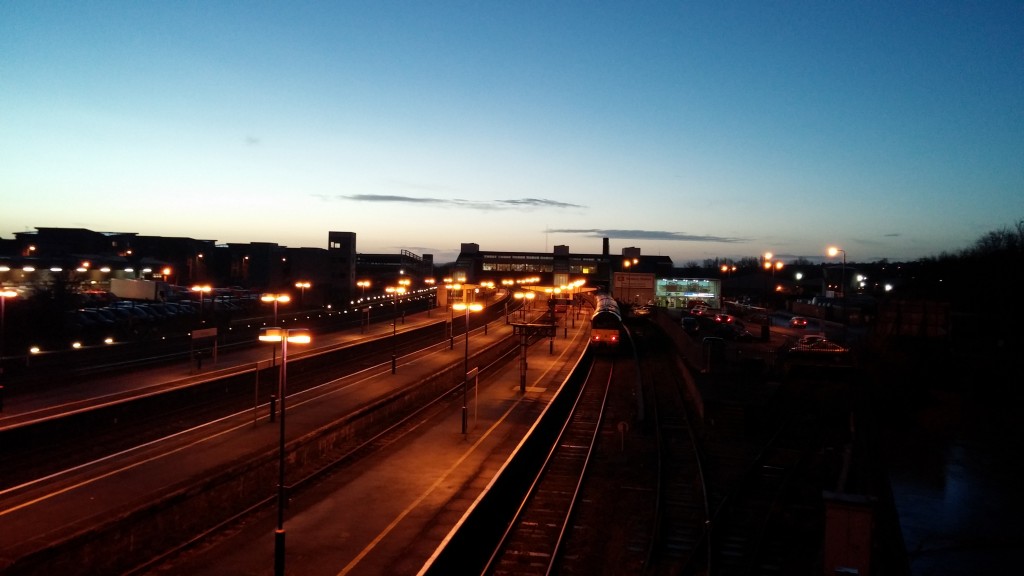 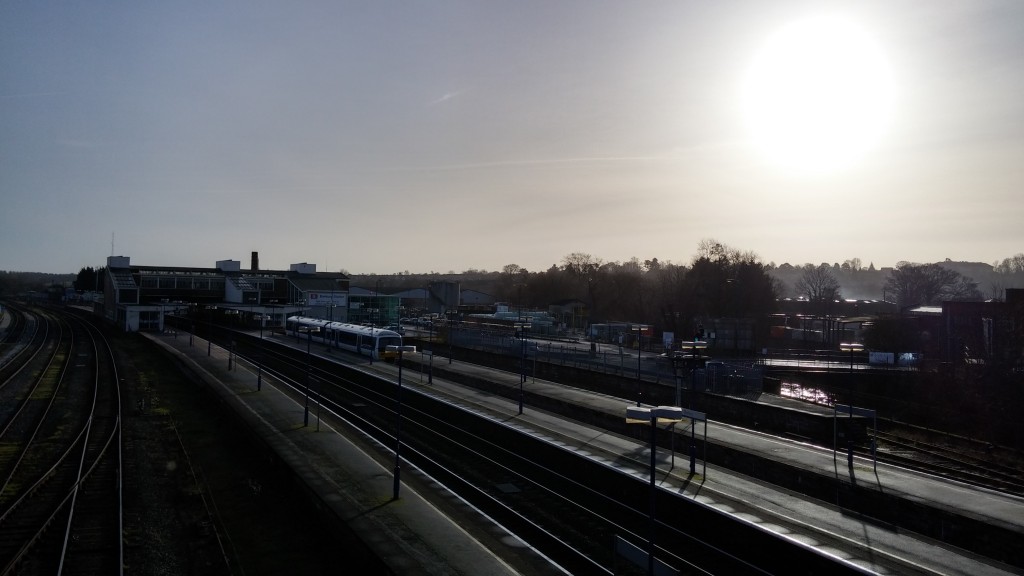 The night colours are true, as are the day time ones. Too bad the weather has been a bit miserable, and we haven’t quite had the chance to go out and take some natural photos. The few we have taken, have amazed us!

Another aspect where this impressed us was the battery life. While a large screen often means a phone is gagging and choking by the evening, this lasted about two days on our heavy usage.

Only two things that I can think of. No Micro SD slot, and cannot remove battery.