Acer Has New Insights For Gamers! 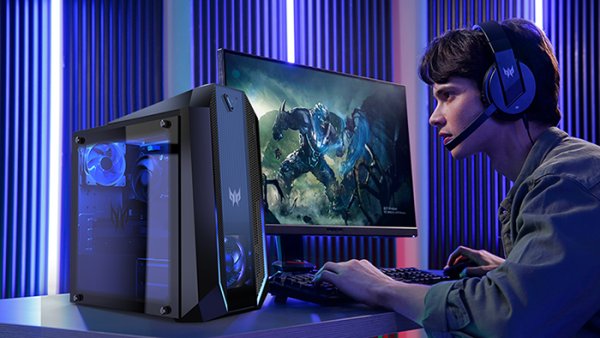 The new RT Cores, Tensor Cores and streaming multiprocessors are what makes the new NVIDIA GeForce RTX 30 Series GPUs special. The RTX 30 Series is powered by the NVIDIA Ampere architecture. This enables it to deliver a 1.9X better performance per watt compared to the previous generation. You will be seeing effortlessly powerful graphics at all resolutions, touching up to 8K. The GeForce RTX 3090, 3080, and 3070 represent the greatest GPU generational leap in the history of NVIDIA.

“Acer is excited to be among the first to offer the latest NVIDIA GeForce RTX 30 Series GPUs on desktops with our Predator Orion gaming series,” said Jeff Lee, General Manager, Stationary Computing, IT Products Business, Acer Inc. “For gamers that demand the latest breakthroughs in performance, the Predator desktops with the latest GPUs will support them to game at their best.”

The Predator Orion 900o specifically targets the needs of hardcore gamers and mega-tasking streamers. It packs up to the latest NVIDIA GeForce RTX 3090 GPUs up to an Intel Core i9-10980XE Extreme-Edition processor in order to melt through AAA titles on max settings. The desktop is monstrous both size and performance-wise. Such a high-level performance requires a good yet aesthetic cooling system. The Predator Orion 9000, therefore, has three ARGB-infused Predator FrostBlade fans in order to keep up with this bleeding-edge internals.

The Predator Orion 5000 has been designed to target the needs of serious games as well as those who may want to stream. It is an RGB illuminated tower that packs up to the latest NVIDIA GeForce RTX 3090 GPUs and an overclockable 10th Gen Intel Core i9-10900K processor for fluid, high-framerate gameplay that is impressive for a mid-sized rig.

The 18-litre tower capacity of the Predator Orion 3000 provides unmatched performance levels for its size. It can be fitted anywhere easily and features up to an NVIDIA GeForce RTX 3070 GPU and a 10th Gen Intel Core i7 processor that are supported by a pair of custom-engineered Predator FrostBlade™ fans, letting users expect high frame rates and low temperatures.

This powerful 24.5-inch 1920×1080 IPS1 gaming monitor boasts an incredible 360 Hz refresh rate to give players ultra-low latency and the smoothest possible animations. This rate translates into game frames being displayed once every 2.8 milliseconds, offering a significant advantage in competitive shooters where precision counts. Featuring the latest NVIDIA G-SYNC technology, this bleeding-edge monitor is packed with everything needed to keep up with NVIDIA’s latest GPUs.