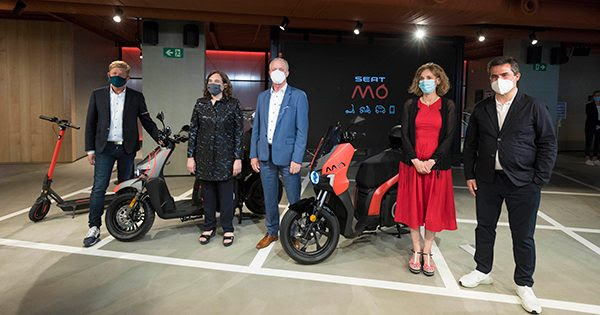 SEAT officially opened CASA SEAT with a ceremony held under the recommended health and safety measures and attended by prominent authorities and business leaders from the Spanish and Catalan economies. The company took the opportunity during the event to announce the creation of SEAT MÓ, its new urban mobility brand.

After its virtual presentation on June 4th, CASA SEAT opened its doors to the public today for the first time. SEAT President Carsten Isensee kicked off the event by highlighting the importance of this new space as the company’s headquarters in the center of Barcelona. In the words of the President, “CASA SEAT is much more than a tribute to our origins. This iconic building is also the place from which we look to the future; our headquarters in the heart of Barcelona, which we expect will become a benchmark urban mobility hub.”

Next, the fourth Deputy Prime Minister and Minister of Ecological Transition and the Demographic Challenge, Teresa Ribera, spoke via videoconference followed from CASA SEAT by Àngels Chacón, Minister for Business and Knowledge of the Catalan Government, and Ada Colau, Mayor of Barcelona.

This afternoon, SEAT Vice-president for Sales and Marketing and CUPRA CEO Wayne Griffiths announced the creation of SEAT MÓ, the new brand that will drive the urban mobility strategy focused on micromobility products and services, including the SEAT MÓ eScooter 125 and the SEAT MÓ eKickscooter 65.

“With SEAT MÓ we want to make individual mobility accessible for everyone and CASA SEAT will be its center of operations. Barcelona will be the testing ground for the development of urban mobility solutions to be exported to the rest of the world” said Griffiths.

The tour ended in the car configurator area, where customers and visitors will be able to configure their own SEAT vehicle and, lastly, in the CUPRA Garage, where visitors saw the CUPRA Formentor PHEV, a 100% new model produced in Martorell that will be in the market very soon.

At the last edition of the Smart City Expo World Congress, SEAT announced the creation of a strategic business unit focused on urban mobility, which now takes on its own identity. The company presented its new SEAT MÓ eKickScooter 65 and SEAT MÓ eScooter 125, the first 100% electric SEAT motorcycle in its 70-year history, which also has a specific model for sharing services. In this sense, today the company confirmed the launch of its electric moto sharing service in Barcelona as of July.

Lucas Casasnovas, the Head of SEAT MÓ, pointed out that “the SEAT MÓ eScooter 125, the SEAT MÓ eKickScooter 65 and our entry into the world of motor sharing demonstrate our commitment to adapting to the new needs of cities and their residents by providing efficient, sustainable micro-mobility solutions.”