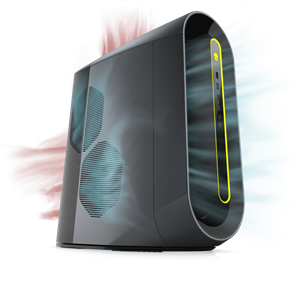 As you know, the Alienware Aurora R10 Ryzen Edition was announced at the end of last year. From March 3rd, the R10 Ryzenhas become available to order from Dell.com at a cost of £999. The Aurora R10 Ryzen Edition has brought together Aurora and AMD processors, offering 64MB of cache, and a max boost speed of 4.7GHz. The R10 is the first Alienware, and Dell, desktop to support PCI-Express 4.0 technology

Intel had a death grip on high-end gaming PCs for years while AMD’s processors struggled to provide enough gaming performance to be competitive in the high-end enthusiast tier. The tide has recently turned, however, and this summer AMD’s Ryzen 3000 series of Zen 2-based 7nm processors took the world by storm. As a result of this monumental shift, Dell’s gaming products division, Alienware has more recently started offering AMD’s CPUs in its desktop lineup for the first time since the glory days of AMD’s Phenom II.

The Aurora R10 AMD Ryzen Edition obviously gets its name from the AMD Ryzen 3000-series processor at its core. Configurations start at $1,199 with the Ryzen 5 3600 hexacore processor working all the way up to AMD’s latest 16-core Ryzen 9 3950X, that we have on the test bench today. Graphics options scale similarly, from Radeon RX 5700 with 8 GB of VRAM all the way up to our test config’s GeForce RTX 2080 Ti. Aurora AMD Edition systems also include between 8 and 64 GB of DDR4 memory at speeds up to DDR4-3200. There are a couple of spinning 7200-RPM drives in the storage configurations, but we always recommend solid-state boot drives, and Alienware offers several NVMe SSD options that can also include a SATA hard drive as secondary storage. Let’s take a quick look at everything on the table today.

Alienware provides plenty of ports on both the front and back of the R10, which makes it easy to expand with external storage, as well as leaves plenty of room for peripherals.

The Aurora is upgradeable, to a point. It really hasn’t changed on the inside from the previous spaceship-inspired design. You can remove the right-side panel without any screws by pulling a switch at the back near the top. Once inside, you can swing the power supply out. This exposes the CPU, which is water-cooled, as well as three empty hard drive bays: two 2.5-inch bays on the bottom and one 3.5-inch bay on the side.

There are four RAM slots on the proprietary motherboard, two of which were occupied in our test config, so you can add more RAM later. The PCIe-NVMe slot is behind the GPU, so you’ll have to remove that to add more M.2 storage.