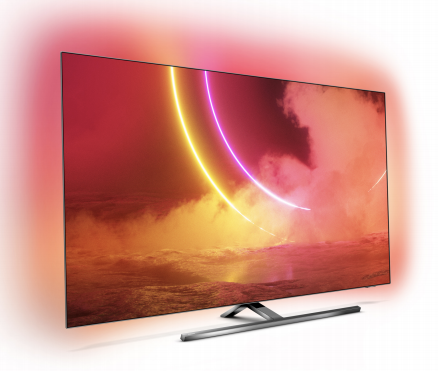 Philips has introduced new 805/855 OLED models at its annual European showcase in Amsterdam. The OLED805 and OLED855 have a slim metallic build and the tiny bezels you’d expect.

The new sets are available in 55 and 65-inches and will feature a fourth generation of the company’s P5 picture processor.

The sets will once again support all the major HDR standards including Dolby Vision and HDR10+ while they run on Android TV based on Android 9 Pie with the Google Assistant built-in. It’s also compatible with Amazon Alexa, too. Basically, there’s support for pretty much everything.

The latest tech to be incorporated on the chip is improved AI functionality – most big TV makers are now using AI to improve picture quality and upscaling and as with others this is aided by a database of existing content to compare footage too.

As well as the new OLED range will also be a new Performance LED TV series, including new 9000 series models with Bowers & Wilkins audio as we’ve previously seen on Philips’ high-end OLED sets.

A Philips 9435 TV will come with “Premium Sound by Bowers & Wilkins”, with 2.1.2 channels, while the 9235 43-inch model will sport a 2.1 B&W sound system. Also announced today was that all 2020 Ambilight TVs will use the three-sided version of the tech, rather than dual-sided.

The excellent sound quality of the previous models has been further improved. The 50-Watt system now features a new woofer design with the inclusion of four passive radiators for extra, deeper bass while the two front speakers integrate new mid-range drivers and upgraded tweeters for a cleaner, more detailed performance.

The OLED805 and 855 both feature Dolby Atmos decoding, the Dolby Atmos Virtualizer function, and Dolby bass and dialogue enhancement. The new sets are equally Smart, featuring Android TV version 9 (Pie) with ease of use guaranteed by both the Google Assistant built-in and Works with Alexa capabilities.

The OLED805 and OLED855 share the best in European design with an ultra-slim chassis, edgeless bezels, and high-quality metal finish. The OLED805 features the new chamfered ‘stand, finished in dark chrome. while the OLED855 has a new central stand angled to the table – also in dark chrome. Both stands are designed to give the impression that the sets are floating above the table-top: Both sets also include a new, premium Remote Control with elegant, flush, backlit keys, in a metalized finish. For the ultimate luxury touch, the sides and rear of the Remote Control are wrapped in responsibly sourced leather from Scottish leather specialists Muirhead.