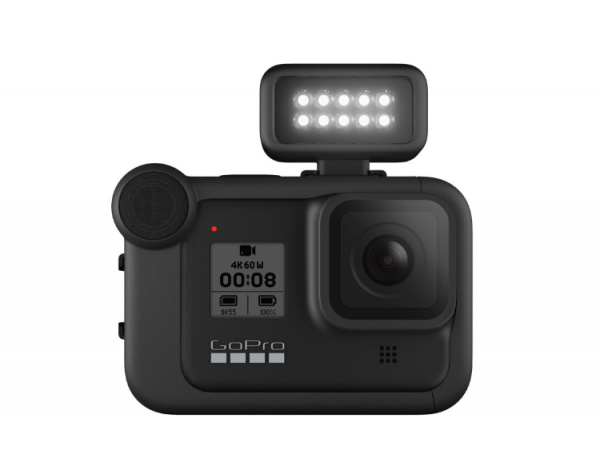 GoPro has introduced Light Mod, a new lighting accessory for the HERO8 Black action camera. The mod is essentially a removable flash that sits on top of the camera in the same way a flash would use the hot shoe on a mirrorless or DSLR model. The company introduced the Light Mod too close to the holidays to get in time for Christmas, but the model is now shipping in the US.

The Light Mod is intended to be as easy and intuitive for those already firmly in the GoPro ecosystem to use. Accordingly, it is compatible with pre-existing mounts made by this company, which are found on wearable accessories such as the Magnetic Swivel Clip, Head Strap and Handler unipodal camera stick.

It has also been designed to be part of a modular system with the recently-released HERO8 Black at the center. However, a Light Mod owner might need a GoPro Media Mod beforehand. This is a kind of rugged case for the action-cam, although it also incorporates a 3.5mm microphone port and 2 mount-like cold shoes.

As promised, the Light Mod is able to project up to 200 lumens of light on anything within 3 feet (91 centimeters), and there are actually four brightness settings to pick from.

There’s a built-in rechargeable battery that GoPro says is good for around six hours of illumination between charges, and the accessory is waterproof down to around 33 feet (or 10 meters) as well, just like the Hero 8 Black itself.

The Light Mod can fix to a range of existing GoPro accessories, but to attach it directly to the Hero 8 Black, you’ll need the Media Mod – which isn’t actually on sale yet.

We’re also still waiting for the Display Mod, which gives the action cam a larger, rotatable display – that’s apparently shipping in March, at the same $79.99 price point. These Mods are one of the major selling points of the Hero 8 Black, so GoPro will be relying on them to find a substantial number of buyers.

Speaking of screens, Display Mod also attaches to the Media Mod, unlocking a whole new perspective from your HERO8 Black. The compact, folding, 1.9” screen serves as a front-facing display so you can frame the shot and see yourself in the action—perfect for any creator who wants to be nimble and low-profile in the studio or out on the scene. When not in use, the Display Mod screen folds down and out of the way, functioning as a rear-facing display. Media Mod (£79.99) will be available for pre-order in early January and ship by the end of the month. Display Mod (£79.99) will begin shipping in March.