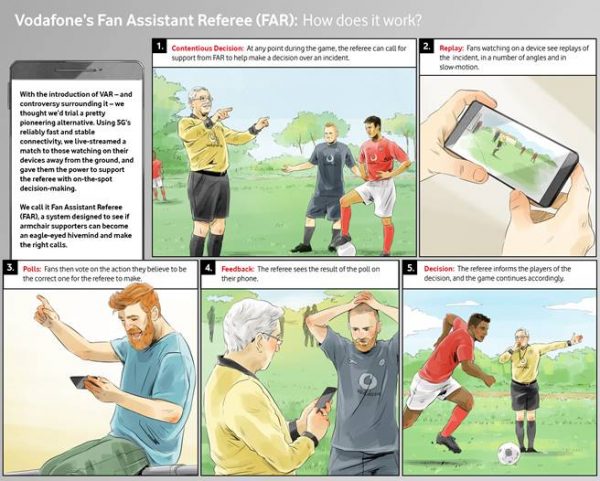 Vodafone‘s push to connect rural areas of the UK with 5G has provided the platform to connect fans to a football match, allowing them to be a very literal armchair referee. The Isles of Scilly plays host to the world’s smallest football league, with the only two teams playing each other around 20 times per season. For the first time, a match was live-streamed over Vodafone’s 5G network which allowed fans to tune in and have their say on contentious moments in the match.

Just like the Premier League’s divisive video assistant referee (VAR), fans could review incidents and then send their decision on a possible penalty kick, for example, to the on-pitch referee Paul Charnock who was equipped with a Samsung S10 5G.

The fan-assistant referee (FAR) was used numerous times throughout the match played between Garrison Gunners and Woolpack Wanderers, weighing in on several fouls, a disputed goal and two contested penalty kicks.

More about Vodafone and the league

The huge capacity, faster speeds, and quick response times of Vodafone’s 5G service are a great way to bring supporters unable to attend a match closer to the action. Not only does 5G offer a richer viewing experience, but higher levels of connectivity allow customers to communicate simultaneously when network demand is at its peak.  This opens up a new range of possibilities for fans to experience and enjoy their favourite sports online.

While many football fans across the globe enjoy being armchair referees, it’s the supporters of the Garrison Gunners and Woolpack Wanderers on the Isles of Scilly who can now officially claim that title as their own.

IT Pro was invited to experience a live demo of 5G in another sporting context earlier this year, with Orange Business Services showing how 5G-controlled cameras that fly above players in football stadiums could provide new viewing experiences for live sport.

5G, the next generation of mobile networking, is widely considered to be a viable solution to the rural connectivity issue the UK faces.

According to government figures, approximately only two-thirds of the UK can access “decent signal” and that’s one of the reasons why the Department for Digital, Culture, Media and Sport (DCMS) released £30m in funds to boost rural connectivity earlier this year.

Chairman of the Isles of Scilly Football League Anthony ‘Gibbo’ Gibbons said: “I have never seen the referee so happy after a game. He was empowered by the other islanders to make bold decisions – and not always in my team’s favour! Vodafone’s involvement with the league has got everyone excited.”

Vodafone UK’s Chief Executive Officer Nick Jeffery said “This was great fun for the fans, and we’re very happy to have been the first network operator to take 5G to the Isles of Scilly. Vodafone has 5G in more places than any other network, with 77 towns and cities across the UK and Europe now live. Our commitment to rolling out our network to non-urban locations is very strong, as our recent Shared Rural Network agreement with the Government and other network operators proves. I’m very proud that Vodafone is travelling those extra miles to connect rural and isolated communities.”

Following the success of the world’s first 5G-enabled Fan-Assistant Referee test on the Isles of Scilly, Vodafone will now work alongside local businesses looking to boost tourism on the islands. 5G connectivity will enable them to show high-definition videos and 3D-images of the islands’ attractions to a worldwide, online audience.