STORYSIGN CONTINUES TO HELP DEAF CHILDREN LEARN HOW TO READ 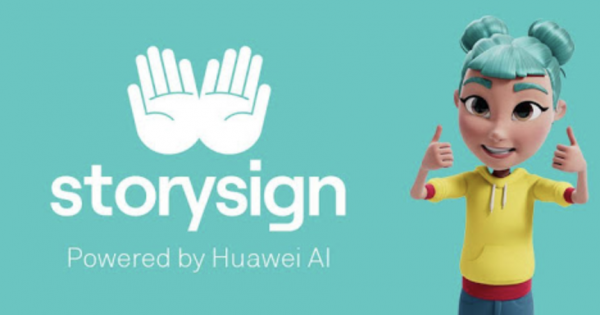 Storysign has committed itself to teach deaf children to read. Huawei has announced the availability of the Storysign mobile app on Apple iOS. Storysign is in pursuit to help deaf children learn to read by giving them the option to learn no matter where they live or what smartphone they have. The app that translates popular children’s books into sign language will be featuring three new books in the American Sign Language.

Walter Ji, President of Huawei’s Western Europe Consumer Business Group, said: “At Huawei, we want to use our technology to make the world a better place – no matter where you live or what smartphone you use – whether it’s Android or iOS. 34% of the people who have downloaded the free StorySign app have become daily users, which reinforces our commitment to helping more deaf children learn to read and makes us proud to continue developing and expanding StorySign”.

Huawei has made this announcement on the International Day of Sign Languages for all the 32 million deaf children worldwide, most of whom struggle with learning to read. The American Sign Language is used as the first sign language in major parts of the world such as in the United States, Canda and territories in Africa, Asia, and Central America. It is quite popular throughout the globe and Huawei has taken full advantage of it by incorporating it in their app for deaf children, allowing access to more books for them.

Joseph Murray, President, World Federation of the Deaf, commented: “With the expansion of StorySign to new national sign languages, more deaf children than ever before will have access to this valuable learning resource.  We look forward to working with Huawei on future projects around the world!”

What Huawei aims to achieve

Out of all the deaf children in the world, 90% are born to parents who are not deaf. These parents don’t know the sign language immediately. Consequently, it becomes difficult for children in learning sign language. Huawei has taken an incredible step by making the app accessible to a wider range of people, that too for free. It in a sense raised awareness and governments and organizations around the world should take inspiration from Huawei and follow the footsteps.

Mark Wheatley, Executive Director, European Union of the Deaf, added: “The support that we have received from Huawei to date has had a genuine impact on deaf children and their families. Through our ongoing partnership, we are continuing to work closely to ensure that StorySign reaches as many families and communities as possible, helping us get one step closer to our shared ambition of helping more deaf children learn to read.”

Huawei has also commissioned research that highlights the barrier in the UK between profoundly deaf children and those that are able to hear, in addition to an appetite from the British public to learn sign language. Some really eye-opening stats from the research including:

Apart from the announcement of the app, there has been an addition of four new avatar-signed books in the Storysign app available across eleven countries in thirteen languages. Moreover, Huawei has committed $500,000 in its partnership with the European Union of Deaf to fund further deaf literary projects. As part of this continued commitment, the new books have all been added to the United Kingdom StorySign library this year. These include:

Francesca Dow, Managing Director of Penguin Random House Children’s said: “We at Puffin and Ladybird are delighted to be working with StorySign, using their innovative technology to bring some of our best-loved picture books to life for deaf children and their families. We believe all children should be able to enjoy stories and we are incredibly proud of this ongoing partnership, making our books available in local sign languages in countries around the world.”

StorySign can now be downloaded worldwide for free from Google Play, the Huawei AppGallery, and Apple App Store.