After Vantablack debuted as an exclusive, patented blackest-of-black material, many people have tried to come up with their own versions of the blackest paint imaginable. Singularity 2 is one such material, with collectors’ pieces starting at $35.
Singularity 2 is the new and improved version of Singularity 1, the first commercially available ‘blackest black’ for curious people and artists. Singularity 1 didn’t quite cut the mark on absorbing all the light that came its way, so this version has improved upon that and the surface texture as well. The developers also made a new surface coating for it to protect it from damage. The idea behind such a deep black for them was to make it resemble black holes, which are perhaps the only thing in our universe that completely swallow light. Their existence itself is being hotly debated right now, but from what we’ve been able to capture through telescopes, their image gives a profoundly beautiful feeling to people who are fascinated by the science behind them.

Many people view such innovations as useless startup ideas fueled by the capitalist desire to improve aesthetics. But it does come with it’s own sets of practical uses as well, considering that blacker shades of black are built on the principle of less light being reflected back by the surface. This means that it can be used in space imaging by reducing the amount of stray photons going into an image of the stars or galaxies. For military uses, this paint can better camouflage air-crafts flying through the sky at night.

The amount of research going into projects such as Singularity 2 signifies a change in how black paints will be made in the coming years. Whereas people have been using charcoal to form black paint for centuries, Singularity 2 and similar prototypes are made with carbon nanotubes, which are known not just for their color but their incredible tensile strength as well. But they’re also reported to be as flexible a thread, depending on how they’re structured.. This means that it’ll be difficult to use them as a smooth paint for ordinary objects, but with refinement we may be able to use them as a coating for electronics as well. 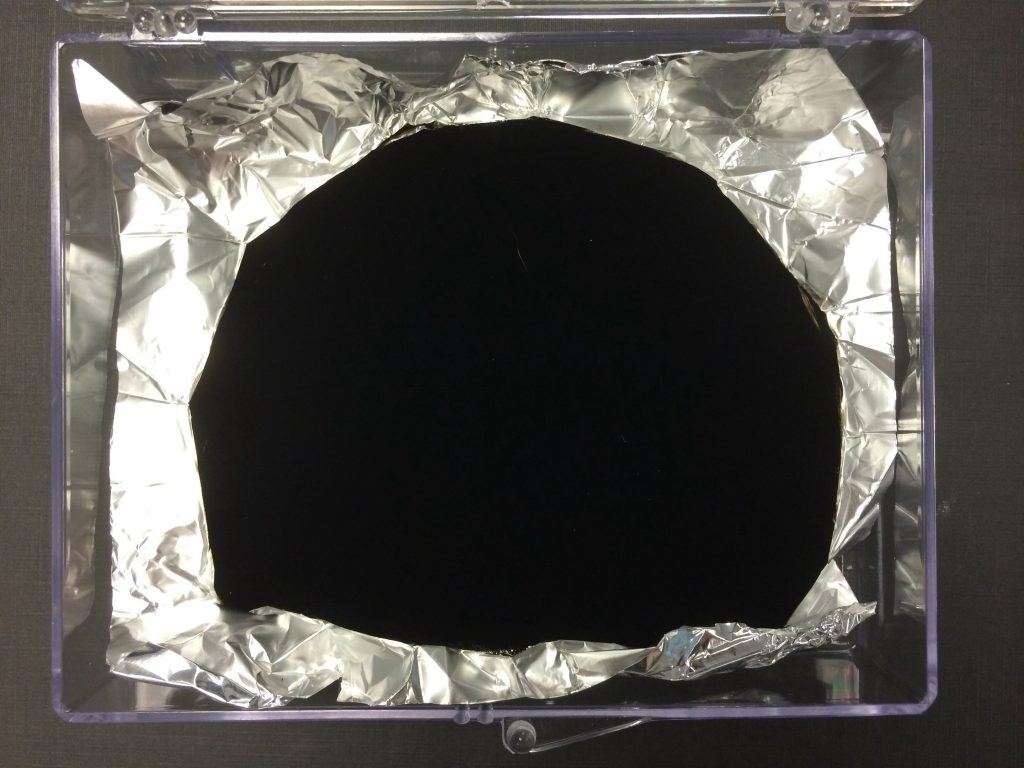 Carbon nanotubes are a relatively newly discovered allotrope of carbon. They’re constructed with extremely thin sheets of carbon and have a variety of uses in electronic equipment. Since they’re semi-conductors, they’re very useful in electrical as well as thermal conduction. Black ‘paint’ is only one of the many uses of nanotubes and groundbreaking research has been carried on regarding them in recent years. One may argue that for such a useful and expensively produced material, Singularity 2 is hardly one of the best ways to use it.

There’s only a niche market for art collectors and artists who want to use this material, so it doesn’t come as a surprise that demand for a ‘blacker black’ isn’t very high these days. Currently the large scale production of Singularity seems infeasible due to the high cost but perhaps such a light absorbing material may improve camera technology for ordinary devices as well. And who knows, maybe the next iPhone will launch with a Singularity shade too!