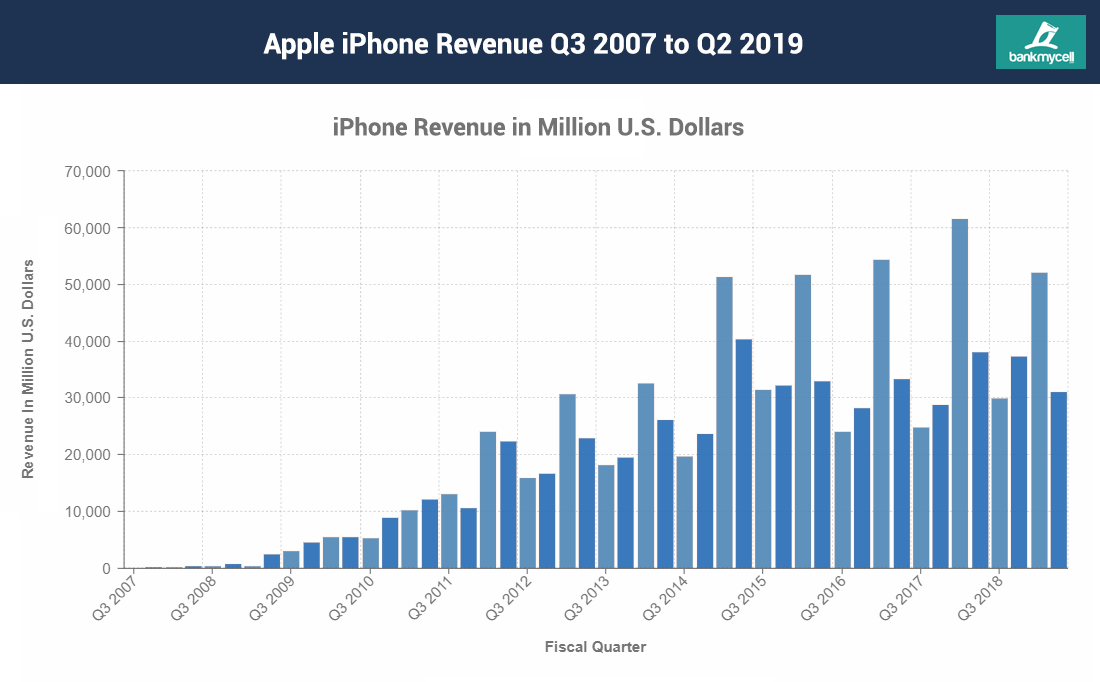 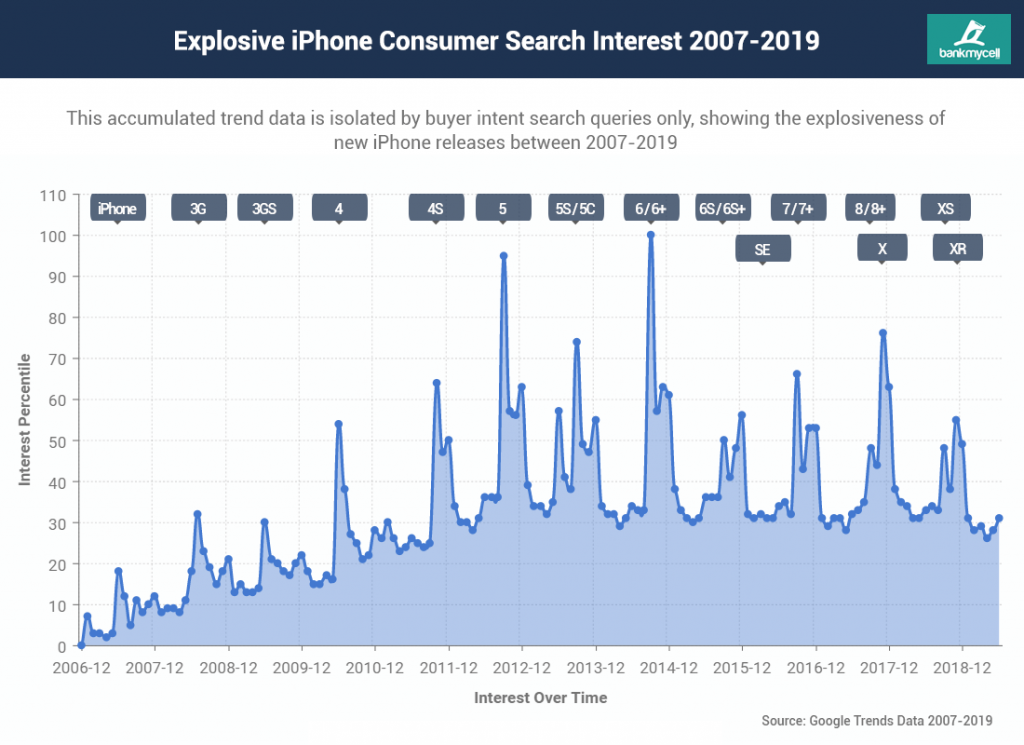 The first iPhone was launched on the 29th of June 2007 and revolutionized the way people see and use mobile phones. It was the first-ever full touch screen smart device that left the world shocked with its form factor and durability. It was from there that competitor companies followed the footsteps of Apple and created a world of incredible smart devices that we see today.

Apple has launched new iPhones every year and their popularity speaks for itself. Let’s go down the memory lane and see the stats for how the iPhone did in the consumer market every year.

The classic iPhone launched in 2007 by Steve Jobs himself sold 1.39 million units worldwide. It had a 3.5-inch touch screen with a 2MP rear camera. The first iPhone had 128MB of RAM and 4GB of internal storage which was more than enough at that time. It became famous quickly and people got so inspired by the technology that Samsung and others followed Apple’s footsteps and started creating touch screen smart devices. But the iPhone maintained its standard over the years and kept getting better.

After the overwhelming response of the first iPhone, Apple launched the iPhone 3G on July 11, 2008. This again had the same 3.5-inch touchscreen, a 2MP rear camera, 128MB of RAM and upgraded 8GB of internal storage. However, Apple always brings something new and this time it was the advent of the App Store which enabled third-party app access on the iPhone. This iPhone sold 11.36% million units worldwide with a 9.97 increase in sales.

June 19, 2009, was the day of the iPhone 3GS. Apple made a lot of upgrades to this iPhone. The screen size remained at 3.5-inches, however, the RAM doubled to 256MB. The camera was bumped up to 3MP with 480p video recording capabilities. Apple also featured a lot of new functionality such as the introduction of the camcorder, MMS, voice control and the Copy, Cut and Paste feature. This iPhone sold 20.73 units worldwide with a 9.37% increase in sales.

Next came the iPhone 4. On June 21, 2010, Apple left its customer awestruck by completely changing the design and the form factor of the iPhone. From an aluminum back and glass front, the iPhone went to glass on both front and back, packed in an aluminum frame. The screen size remained the same but Apple upgraded other internals such as the RAM boosted up to 512MB, the camera bumped up to 5MP with 720p video recording capabilities. Apple also introduced the all-time famous Facetime and game center. Multi-tasking was the key to this iPhone. It sold a solid 39.99 iPhone units worldwide with a huge 19.26% increase in sales.

2011 was the year Apple made upgrades to the iPhone 4 and turned it into the iPhone 4S. 14th October 2011 was the day the iPhone 4s with its 8MP camera and the introduction of Siri was unveiled. This model sold 72.3 million units worldwide with a massive 32.31% increase in sales.

September 21, 2012, Apple kicked back with its innovation with the advent of the iPhone 5. It had a 1GB of RAM, an increased 4.0-inches LED-backlit display and 1080p video recording capabilities. This model sold 125.04 million units worldwide with an enormous 52.74% increase in sales.

Then came the iPhone 5S and 5C on September 20, 2013. The 5C was introduced as a budget smartphone and offered a range of vivid colors. The 5S was the flagship smartphone that won hearts with the introduction of Touch ID integrated into the home button. The rest of the internals remained the same except for the annual upgrade of the Apple chip. This model sold 150.26 million units worldwide with a 25.22% increase in sales.

With 2014 came another wave of innovation when on 19th September, Apple launched the iPhone with an all-new design. This year Apple introduced two models, one for the regular-sized screen lovers and another for the large screen lovers. The iPhone 6 had a 4.7-inch display whereas the iPhone 6 Plus had a massive 5.5-inch display. The internals was boosted up with better numbers for battery and higher resolution for the display. Apple sold 169.22 million units of the iPhone 6 & 6 Plus worldwide with an 18.96% increase in sales.

2015 was the year when Apple stayed with its previous design and innovated the internals and added a new highlight feature following the tradition since the release of the iPhone 4. The iPhone 6S was launched on 25th September 2015 with a Plus model as the iPhone 6. This year Apple introduced 3D touch technology to win the hearts of the customers with an improved 12MP camera. This model sold 231.22 million units worldwide with a massive 62% increase in sales.

In 2016 Apple released three iPhones. The iPhone SE was released in March as a budget option following the design of the iPhone 5S. Then on September 16, 2015, Apple launched two new iPhones namely iPhone 7 and the iPhone 7 Plus. Apple didn’t change the design from its predecessor but added two rear cameras to the iPhone 7 Plus. Apple also introduced a new space grey and jet black color to attract customers. This unit sold 211.88 million units worldwide with a 19.34% DECREASE in sales. The iPhone 7 did not do good in the market as Apple didn’t bring much to the consumer market.

After a bad year in 2017, Apple came back with innovation in 2017 with the advent of the iPhone X. A complete new design with a massive edge to edge 5.8-inches OLED display. This iPhone featured Face ID to lock and unlock the device. However, it was the first time Apple priced an iPhone at $999. This unit sold 216.76 units worldwide with a 4.88% increase in sales. Apple came back in the game. There were two other models launched alongside the iPhone X: the iPhone 8 and the iPhone 8 plus which introduced a new color and a front-back glass design. The rest mostly remained the same as the iPhone 7.

Apple did not innovate much this year as they simple updated the iPhone X and called it the iPhone XS. However, on October 26, 2018, they introduced the iPhone XS max that had a massive 6.5-inches display. They also released the iPhone XR which became the budget choice for consumers featuring an LED display and a single camera. For the iPhone XS and XS max Apple sold 217.73 million units worldwide with a small 0.97% increase in sales. However, the iPhone XR became the most famous iPhone to date as the sales were greater than the flagship phones majorly due to the price factor.

Apple is going to release the new iPhones today. Finger crossed for what they have in store for us. To see the rumors check out our rumors report. A cordial thanks to Ash Turner at BankMyCell for providing with all the research data. You can see the full report via their website.