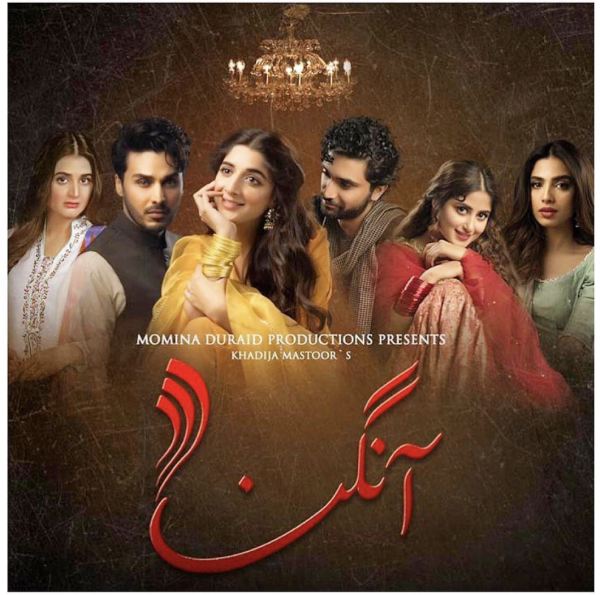 Aangan episode 13 has recently aired and this week it was all about Chammi’s wrath. it stars Sajal Aly, Ahad Raza Mir, Omair Rana, Mawra Hocane and Zaib Rehman. The play is not on YouTube or any other digital media platform so far. So here’s our review and recap for those who are curious as to what’s happening!

The Story So Far:

The story begins with the love affair between Subhan (Ahsan Khan) and Salma (Sonya Hussayn). Subhan is a poor worker boy, Salma is the rich employer’s daughter. The person who calls the shot in the haveli is Maalikan (Zaib Rehman) who is angrily dealing with a philandering husband, Muzaffar (Abid Ali).

Muzaffar’s had two mistresses, Firdos and Akhtari who also have children with Muzaffar. Muzaffar has two daughters in law played by Madiha Rizvi and Uzma Baig. Muzaffar’s son, Mazhar (Omair Rana) is quite mean to his wife (Madiha Rizvi) and Azhar (Mustafa Afridi) is also not particularly fond of being around his wife and child because he is too busy fighting for a revolution against the British.

Salma runs off with Subhan, gives birth to Safdar and dies of tuberculosis. Muzaffar’s illegitimate children come to live with them. Some have died, only Israr (Hasan Noman) has have survived. Muzaffar and Azhar’s children have also grown up.

Safdar begins living with Mazhar and his family much to the chagrin of Mazhar’s wife. Najma has gone to study. Israr, Malik Muzaffar’s illegitimate son is also living with Azhar and his family with Maalkan. Mazhar has two daughters, Tehmina (Hira Mani) and Aalia (Mawra Hocane). Mazhar’s wife hates Safdar. Safdar is sent to Aligarh to study. Tehmina is arranged to marry Jamil (Azhar’s son). Tehmina has commits suicide because of her failed romance with Safdar. Mazhar in a fit of rage, soon after Tehmina’s death, murders a British officer.

In Aangan’s episode 13, we see Alia rise from a fairly passive character to an active one. She takes her situation head on and tries to fix the situations in many ways. She tears up her mamu’s letter, tries to make peace with Chammi. She also decides that she would study and graduate and never need anyone. However, in all these situations, it is assumed that she would end up falling in love with Jamil which would make matters extremely complicated.

While the drama opens in a more explanatory note that Jamil is indeed extremely resentful of his father’s inability to provide for him, which is what has turned Jamil into an opportunist, the rest of the episode is still fairly confusing for Jamil’s core conflicts. How has he suddenly fallen in love with Alia? How does he plan to deal with Chammi? Just with angry stares?

Chammi, being the most dominant character so far, has very little to do in this episode. However, as the next promo shows, she will be completely humiliated by the whole family. This can only contribute to a more sinister future since she is prone to lashing out and doesn’t fully think her consequences through either.