Huawei Mate 20 Pro – the Android phone that has it all

Gadget saturation is something we have been achieving as a species for pretty much every new technology that has been released. From TVs to phones to video players to sound recorders to cameras. We get a flurry of new devices, new features, everyone gets excited, and give it a few years and the whole thing dies down. This is definitely the case with most new Android smartphones on the market. However, the Huawei Mate 20 Pro has been the one exception to the rule. It may be down to how Huawei slowly teased it with the release of their Kirin 980 processor. It might be how they teased it with the Mate 20 Lite. However, whatever they did, when they announced the Huawei Mate 20 Pro last month, the whole world was watching. What a show it was, there was every new feature you could hope for, and more. From in-display fingerprint sensing to IR based face unlock to a superior AI camera. The phone can even wirelessly charge your other devices! Needless to say, this review is all praise. However, this is also full of a lot of detail about the tiny things that the phone offers, so if you are after that miniscule detail, this is the review for you! 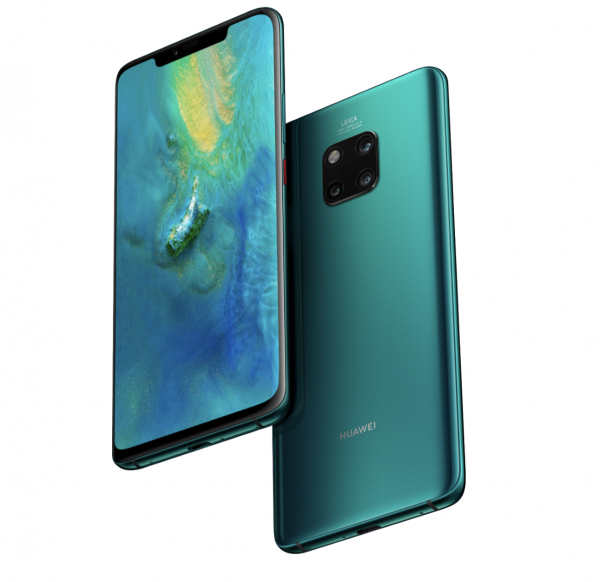 One thing I did notice, and this is me being picky, is that outside of UK/EU, the phone does come with a protective case as well, while the model I have to review doesn’t.

It is no surprise that the Huawei Mate 20 Pro looks and feels really good. The curved screen means it fits really nicely in your hand. The front is mostly just screen, while you do have an extra wide notch on the top. Extra wide compared to some, not to all, of course. The notch does house a 3D IR scanner, which works for your face unlock, and will eventually (when the app is released) work with the 3D scanning of objects for AR use.

The display also houses the in-display fingerprint scanner, but unless you need to use it, it is invisible.

The bottom contains the USB C port and two microphone holes. Interestingly, it also features the Dual-SIM slot. Huawei have managed to do this by squeezing the speakers to sound out through the USB C port instead of needing their own slots.

The left side has nothing, while the right side comes with your power and volume keys.

The top of the device has another microphone hole, as well as an IR blaster.

Depending on what colour you have, the back will look different. However, the three cameras and flash sit there, as well as the rating labels.

The NFC is hidden behind the camera, while the wireless charging coil is more towards the bottom half of the device.

Like all Android phones, you start up with signing into your Google account (and before that you either need to pop your SIM in or add your WiFi details).

At that point, you are given the option to either set the phone up from a Google cloud backup or a Huawei cloud backup, or from a different phone all together. Since I already use plenty of Huawei phones, I went for the Huawei cloud back up for a change.

It works rather well, to a point. A lot of my old apps were installed, and most had their passwords already entered. Some others, however, didn’t.

Setting up a pin

Whether you like it or not, the world we live in needs a high level of security now. Android and EMUI pretty much ask you to start off with a 6 number pin option. If you prefer a 4-number pin, you can go to the options and change it. Otherwise, you enter that.

Set up your face unlock

After this, the phone will want to set up your face unlock. It is rather simple. Simply look at your phone and then turn it around, as guided by the screen. Remember, this is a 3D IR scanner, so will work in the dark as well.

Set up your Fingerprint

At this point, the phone will then ask you to set up your fingerprint. This is an under the screen, in-display fingerprint scanner. As you slowly lift your finger and place it down again, it makes notes and builds a model of your fingerprint. After set up, you are asked to add more fingers, if you like. I normally set up both hands, thumbs/index fingers, as I deem fit.

You can always enrol your face or set up more fingers from the settings later.

Since I wasn’t quite happy with how well the Huawei Cloud back up had worked, I decided to use the Huawei Phone Clone app. This one is pretty much as good as magic. It sets up a WiFi Peer-to-peer connection between the two devices and sucks up almost everything from the older phone, including settings.

Once this one had run, pretty much all settings, including passwords, and in some cases, where I had last scrolled to in apps, was all set up.

Freakishly, this even worked for Google’s Authenticator app. I want to say that one is a bug, but I would leave that one to Google to sort it out.

Apps that I had to go and set up again were the likes of Whatsapp (which picks up everything from Google Drive) and the banking/financial/shopping apps.

After the Huawei Mate 20 Pro is set up, you will immediately notice how quick and responsive it is. In fact, if you do want to push things up a notch, you can even head to the Battery settings in your device and enable Performance Mode. This helps if you are a gamer and need higher performance. However, for your daily needs, the ‘regular’ mode works just fine. The good thing is that Huawei have made the option to do so available.

The face unlock works pretty well, be it light or dark. Such is the nature of IR, even though it does impress me every time.

However, generally, it is so fast that I never have to think about unlocking the device. I simply lift it up and the screen is staring at me. You do have the option to go straight to the home screen, or still, require a slide to unlock.

This is a pretty exciting ‘next move’ in the world of Android phones. While Face Unlock has existed for a while, in-display fingerprint scanning is still new and not that common in phones. As such, it works by sitting under your display, and then lighting up your finger when you place it in the right place.

This scanner can take up to 5 seconds to recognise your fingerprint, which is common for this technology at the moment. However, the likes of Huawei have already reduced the regular fingerprint to milliseconds, and the latest One Plus 6T also has a much faster in-display fingerprint scanner, so this technology will only get better.

The speaker is probably the one thing that doesn’t impress a whole lot on the Huawei Mate 20 Pro. Don’t get me wrong. It is decent and works well. It isn’t tinny or any such thing. It is just like any other good phone.

If you get my drift, what I am really saying is that the speaker only doesn’t impress because it is as good as most other phones. Considering it is hidden behind the USB C port, it is pretty impressive.

This is probably one of my favourite features of the Huawei Mate 20 Pro. The battery life on this phone is amazing! Absolutely top-notch (all puns intended!). The phone lasts ages, and most days, I am only down to around 40% when I plug it in or place it on the wireless charging mat.

Add to this the fact that you can supercharge this to 70% in about 20 minutes, and suddenly you realise how good the battery is.

This basically means that I am so much more relaxed when I go out with my phone these days. No need to keep it on charge or carry extra battery packs. In fact, I even pop it on Sat-nav in the car without bothering to plug it in. It just lasts.

We are finally at a stage in smartphone technology where we can stop being scared of the battery running out, and this is seriously amazing!

EMUI 9 is Huawei’s skin on top of Android 9 on top of the Huawei Mate 20 Pro. EMUI has always been highly inspired by iOS, and that is no different for EMUI 9. In fact, some of the icons as well as the ‘face unlock’ setup is highly inspired.

Having said that, this has its pros and cons. The pro is quite obvious. If you are moving to this phone from an iPhone, you will find the transition quite easy, and a lot easier than any other Android phone. The annoyance is that because it is a mishmash of Android underneath and iOs look on top, it means that the device will often behave in an unexpected way to both seasoned Android and iOS users.

EMUI has had its issues in the past, but I can happily say that EMUI 9 is pretty good in all sorts of ways. Yeah, this isn’t your stock Android, and you still don’t get the app menu, but other than that the device offers great intuition and control.

Integrated with the system are other things that seem to be inspired by Apple, like Huawei Cloud, which does a back up of your phone and offers to save passwords for you in that cloud. A good touch, but as I mentioned earlier, not a 100% clean recovery was made from that cloud.

Of course, if the cloud fails, the Phone Clone gets you exactly where you were. Your icons, your passwords, your menus. It is all exactly as you have it on the other phone.

No Huawei phone review can be done without mentioning the camera.

Below are some samples, some good, some that needed more effort from me!

A good night mode shot, showing the last reminants of some sunlight.

As you can see, plenty of great work done by both the front and back cameras, and pretty much all sorts of light settings. The night mode is extremely impressive, but like any other good camera, this isn’t the only good feature. You have a lot to be impressed by the camera in this phone.

There are some items such as AI video mode, that I will hopefully cover in a bit more detail in another article.

More information on the Huawei Mate 20 Pro can be found on Amazon.

It is available in green, twilight blue and black. It retails for around £900 and is available from pretty much every phone company in the UK, not to forget, even Amazon!

I promised you a complete phone, and hopefully, with me dangling on for over 2000 word, you get the complete picture. This phone is amazing on all counts, and I am yet to discover anything that changes my mind.

I think the best part of the Huawei Mate 20 Pro is that with the hardware and Huawei’s EMUI on top, this makes an amazing next device for anyone and everyone, whether you are coming from another Android or even an iPhone.