How EdTech is paving the Way for a Better Future

Knowing that she couldn’t go to school was something that Asiya didn’t take lightly. It’s not that her parents didn’t want her to. It was just that they were far too scared for what may happen to her during the 3 km commute to the nearest school. And this is just one of the problems that are keeping millions of children out of school in Pakistan.

SABAQ, an award-winning EdTech initiative, is dealing with this problem head-on by leveraging technology and bringing the learning to children like Asiya. With its high-quality digital learning content that is fun and engaging, this innovative learning platform is increasing student engagement and improving learning outcomes through a model that is scalable and accessible to millions.

Partnering up with the National Rural Support Program, SABAQ identified communities where it set up SABAQ Centers, non-formal learning spaces where students are taught using the meraSABAQ Tab. This is SABAQ’s custom-made android tablet that features the meraSABAQ app for primary level, each containing digital learning resources for Urdu, Science and Math, developed in-house and aligned meticulously to the National Curriculum. In less than two years, after extensive research, the SABAQ model is one that delivers. 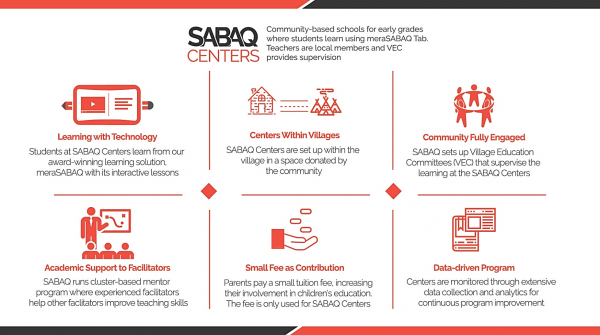 What is unique about the SABAQ model is the extent of community involvement to ensure ownership and subsequent sustainability. The spaces where SABAQ Centers open are donated by the community. The Facilitators managing and teaching at the Centers are recruited from the community. Even the Village Education Communities, who oversee Center operations, collect fee and monitor student performance are volunteer-run comprising of 10 community members.

The fee that the VECs collect are pooled together and spent at their discretion, like putting up solar panels or buying resources for the students.

So, at the end of the day, it is not just Asiya who has her life irrevocably changed after a SABAQ Center opened up in her tiny village. It’s the 21,000 children, enrolled in over 500 SABAQ Centers, who are, for the first time, on a path to discovering their potential. It’s the 500 communities that now boast a SABAQ Center, decorated with fervour to stand out. It’s the 630 men and women who’ve been trained to become Facilitators. At the end of the day, it’s a wonderful mix of technology, a desire to change things and exceptional community spirit that is paving the way towards a better future.