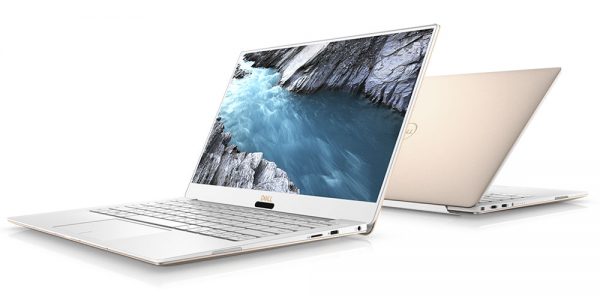 When it comes to Windows Laptops, the Dell XPS range has been one of our favourite devices. In fact, I have ended up buying an XPS 15 for work as well. While the 15 has been more of a workhorse, the device that really impresses is the Dell XPS 13. It has managed to pack in a very compact package a laptop that has delivered way more than what was possible in that package. Dell haven’t stopped there, and this year they have decided to show case the latest XPS 13.

Part of the focus is not just the performance. This time the XPS 13 takes some inspiration from the fashion world. It uses rose gold and white accents to create a beautiful machine.

The new XPS 13 features a white palm rest which uses a new crystalline silica material with the white colour literally woven in, like a fabric, in nine composite layers. Dell is the first to use this woven glass fibre in a laptop. To ensure durability, the alpine white glass fibre weave has titanium oxide coating for a pearlescent sheen and UV and stain-resistant protection to prevent yellowing or staining over time. In fact, if you get a pen mark or other stain on the white interior you can just wipe it off. With a heat resistance superior to metal, woven glass fibre also stays cooler to facilitate longer performance.

Now even more portable as the smallest 13-inch laptop on the planet, its stunning InfinityEdge display fits this 13-inch laptop in an 11-inch frame. It’s a full 30% (3.4mm) thinner as well as lighter, starting at just 2.7 pounds, making the XPS 13 the ultimate in mobility and durability.

Powered by the latest Intel 8th Generation Quad Core processor, XPS 13 delivers superior mobile performance with fast booting SSDs up to 1TB. You can also expect the longest battery life of any 13-inch laptop, with almost 20 hours on FHD, up to 11 on UHD (Mobile Mark 14). Now with a higher resolution display, incorporating 2.5 million more pixels with 4K Ultra HD compared to the previous QHD+.

“While we made the system smaller and lighter, we were able to increase the performance by 2x, over the original XPS 13 launched in 2015, and maintain the world’s most powerful 13-inch laptop in its class.” Said Frank Azor, VP and GM of Dell XPS.

“We developed Dell Power Manager to let you customize your balance of battery life, charging, thermals and acoustics and Dynamic Power Mode that intuitively delivers maximum power as needed, for such tasks as video rendering applications and advanced spreadsheets, while intelligently monitoring and managing system temperatures. This means the XPS 13 has sustained high performance while competitors’ performance declines with continued use, making the XPS 13 the most powerful 13-inch in its class (Tested by Principled Technologies in December 2017 using the Cinebench CPU (multi-core test))”.

As for thermal engineering, XPS 13 is the world’s first laptop built with GORE™ Thermal Insulation, the same silica aerogels that have been used in high tech science and extreme engineering environments to diffuse and dissipate heat, such as insulation on the Mars Rovers and Hyper Velocity Particle capture in the Stardust Probe. This material directs heat out of the device, keeping your system cool while it works hard.