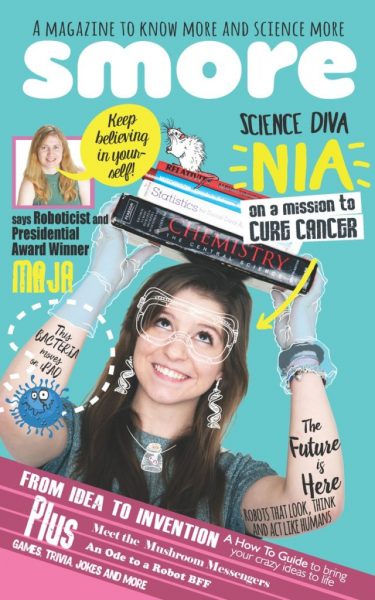 You may recall we featured Smore a few months ago and told you about their Kickstarter campaign. Smore is a magazine that has been launched to give pre-teen girls who have an interest or talent in STEM subjects a point of reference and the chance to read about women who aren’t models, actresses, singers or just famous for being famous. I was given the chance to sample this magazine for myself and put forward my thoughts.

The magazine can be accessed online using a laptop or by using the app for a smartphone or tablet. It’s available for both iOS and Android and costs nothing to download. Each edition costs $5.99 or a yearly subscription will cost $29.99. It’s easy to set up an account and I think the average 7 year old could do it themselves without much parental input, although payment details have to be entered and this is where the adults will need to help and supervise. After that, the magazine is easy to access.

The first issue has 44 pages in total. On the face of it, it looks like every other pre-teen magazine. On the cover there’s a teenage girl but the difference is she’s wearing gloves, has goggles drawn onto her face and there are animated bacteria floating around the screen. There’s also a rocket on the front page. This leaves you in no doubt that she’s more than just a pretty face. On reading the magazine, I discovered that this girl is “Science Diva” Nia, who is 16 years old and on a mission to cure cancer. The layout is fresh, colourful and quirky. The fonts used are fun and feminine and it starts with an editor’s note that begins, “Hey, Future Trailblazers!” Now, if that isn’t going to get little girls fired up, I don’t know what will.

There are so many different topics covered in the first edition of Smore, such as slime molds, volcanoes, astronomy, dinosaur discoveries, the human body, medicine and astro-physics. There are interviews with Nia, who was mentioned earlier and a robot inventor named Dr. Maja Mataric. The whole magazine is really well presented and features quizzes, comic strips and vibrant diagrams. 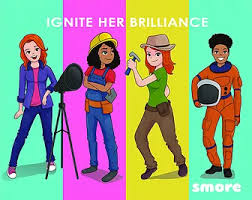 Not every little girl is lucky enough to grow up in a family with progressive parents who nurture their interest or talent in STEM subjects. If parents or teachers have a traditional outlook, they may end up discouraging a girl from reaching her full potential. Of course, stereotypes exist because there are lots of little girls who are naturally interested in fashion, beauty, music and cinema, mistakenly thinking this is the only way they can explore their creative or glamorous side. This is where Smore will hopefully change attitudes and show these girls that creativity is a crucial part of many jobs in engineering and technology and really, what could be more glamorous than reaching your full potential and having confidence in your abilities and achievements? This magazine will give girls choices and normalise female involvement in industries that have been traditionally dominated by men. 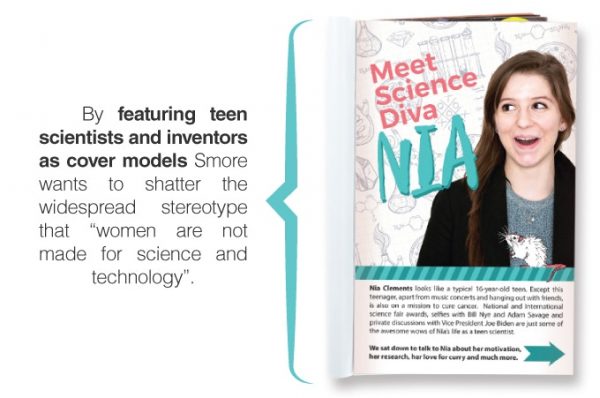 I have to admit, as a grown woman I did wonder if I would find it patronising or boring. The truth is, I learned a lot by reading this magazine. Bear in mind, this is a publication aimed at primary school children, but I found it to be informative and educational without being dull and it kept me engaged the whole way through. I really wish Smore had existed back in the 1980s when I was growing up.