You may remember our feature on the Pure Siesta S6 DAB+ and FM alarm clock radio a few weeks ago. Digital radio pioneers Pure were just unveiling it back then and I recently got a chance to sample one for myself. I was sent the Graphite coloured version, which is grey, but it’s also available in Polar, which is white. Here is what I thought of it.

Having written about this alarm clock radio, I already knew a little about it. I was excited to see the edgeless CrystalVue+ display and see which stations can be received. My first impression on it removing from the box was that it was lightweight, stylish and would look great in my bedroom. Right away I noticed the snooze band around the digital display and noted all the controls were in the same area of the device, so there would be no awkward reaching around to switch it on or off from the bed. Although it features a DAB+ digital radio, it also has an aerial for FM reception, giving you an even larger choice of stations. 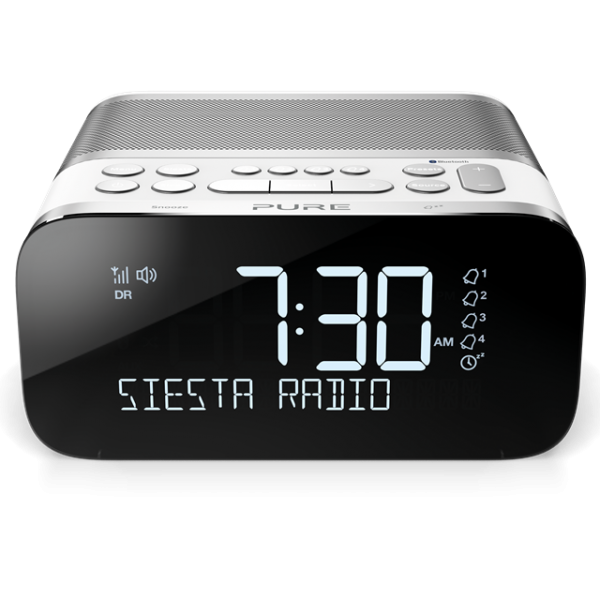 I examined everything that came with it and found that there was an adaptor with two different plugs for using it in the UK and abroad. These were easily interchangeable. So far, so good. The instructions for this come in the form of one large sheet of paper that folds out, with the instructions in various different languages and some black and white diagrams. The layout seemed a little cluttered to me and I considered just tinkering around with the device to figure things out for myself rather than search through these instructions, which is something I would never normally consider but I found the way they were set out so cluttered, that it seemed like the easier option. However, I persevered.

I plugged it in, switched it on and it came to life, playing an old dance tune from the 90s, so I flicked through a few stations until I found one that suited me. As with most digital radios, the stations are already available and there’s no need to tune them in, although obviously you can pre-set your favourites. The UK has the one of the biggest digital radio networks in the world so there will be plenty of choice. 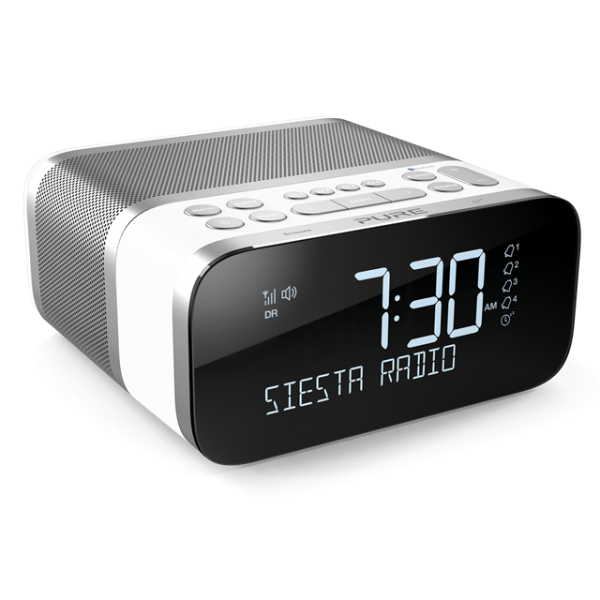 The next thing I did was connect it to my phone in two different ways. I used my phone’s own cable to plug into the USB port and charge my phone. It was surprisingly slow at charging but if you plug it in before you go to bed at night, it should be good to go by the time you wake up in the morning. Then I connected my phone to the Pure Siesta S6 via Bluetooth and they were really easy to pair. All I had to do was select the Pure Siesta S6 on my phone when it discovered it and they were connected, meaning I could stream music from my phone’s apps rather than listen to the radio.

The sound quality is excellent and I found the volume controls easy to operate. What I also liked is that it has a headphone socket so it’s possible to listen to music in bed without disturbing your sleeping partner or any kids in the neighbouring rooms. 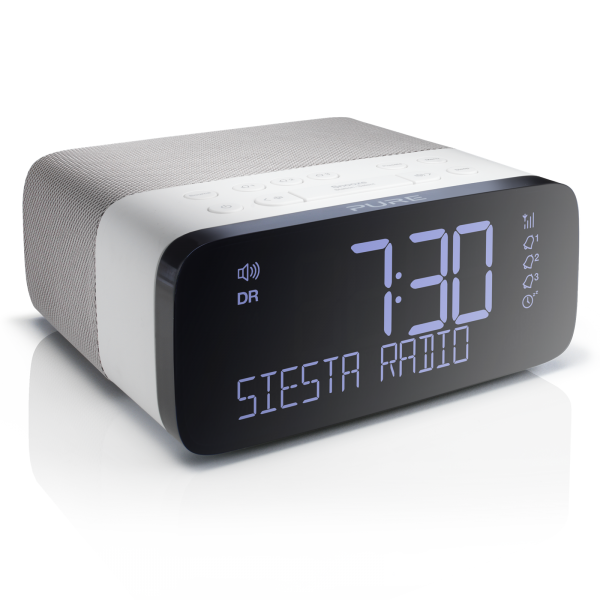 Setting an alarm should have been quite simple but it took me a couple of attempts. The first time I did it I went through all the steps to save an alarm setting but I didn’t switch the alarm on, so I was waiting for the alarm and it didn’t come. When saving an alarm, you can set the time you want to hear it, the duration of the alarm, the alarm type, ie digital radio or a simple sound, which station you would like, the volume and the frequency. You can set it for weekdays or weekends only or daily.

The CrystalVue+ display is clear and sharp. It is edgeless and was easy to read from anywhere in the room but this was touted as the unique selling point and I didn’t find that to be the most impressive thing about this. The thing I loved about it was that there were four different alarm settings. So, for example, if you were studying and needed to take regular breaks throughout the day, you could set the four alarms to remind you to take a break after the first session, second session, third session etc. Alternatively, if someone is taking medication at regular intervals, this would come in handy then. The radio alarm clock I’m currently using doesn’t have that feature and it’s one I really loved. I would say it would encourage me to buy this.

Overall, I think this is a great investment. Having sample it, I can say that it is an alarm clock radio that I would definitely go on to buy and if the only downside is a bamboozling instruction leaflet, it’s a good device. Prior to receiving the item I was advised that it was from the pilot production batch so the finished product that goes on sale would be an improvement on this, but I was delighted with the one I sampled so I can’t wait to go ahead and buy the perfected version.

The Siesta S6 comes with three years warranty as standard. It is available at John Lewis and other major retailers priced at £129.99. If you would like to read more about Pure’s products you can visit the Pure website.