5 Things You Should Not Miss About The Acer Predator 21X 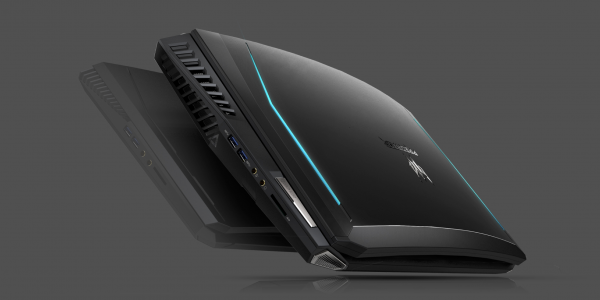 Gaming laptops have always been a bit controversial product since their very inception. Generally, you had to pay twice the money of a decent gaming desktop PC only to have mediocre performance and uncomfortable ergonomics. Just two years ago the best advice would have been not to even think about buying one.

Hot, heavy and good at nothing, the use cases for these machines has been limited. Then everything changed when Nvidia’s latest generation of GPUs were so power efficient that they could be installed in a laptop body. The latest CPUs have also been catching up, keeping the heat under control while giving near-desktop performance levels.

Gaming laptops are still more expensive, but they are no longer bad machines in their own right. Buying a $1000+ gaming laptop is not nearly as ill-advised as it used to be. Coming in the wake of this gaming laptop revolution is the Acer Predator X 21. A $9000 monster that shows us what’s possible with current mobile technology.

This is the Ferrari or Lamborghini of the gaming world: unattainable, but worthy of an aspirational poster. So let’s drool over five of the most incredible features this monster machine has.

Let’s get one thing straight: this computer is portable, not mobile. This is not a computer you’d ever want on your lap or have to lug around as a daily driver. This is a machine to take from desk to desk.

One of the key culprits is that massive curved 21” screen. The curve, beyond looking cool, doesn’t do much, but when you’re in Ferrari territory sometimes the reason is “just because”.

Add to this the fact that it’s a 120Hx G-Sync panel and there can be no doubt that the Predator 21 X is obsessively serious about gaming.

The GTX 1080 may not longer be the top dog when it comes to pure performance, but it’s still a formidable card and remains overkill for everything up to 1440p gaming. The 21 X has two of these puppies in SLI, which means that it’s a true 4K gaming machine if that’s your sort of thing. This is a computer for those who appreciate the best gadget in its category.

This would have been impossible just one generation ago, showing how big a leap the Pascal architecture was. In fact, Acer found some cooling overhead and has overclocked the chips in the predator. Speaking of which…

This machine is filled to the brim with components that chomp on wattage and spit out heat. So obviously the cooling system needs to be designed accordingly. Acer doesn’t disappoint with an intense five-fan cooling solution.

Combined with a staggering nine heat pipes and the unique case venting they aren’t taking any chances with overheating.

The cooling system is interesting for more than just sheer volume and power. Acer has designed an automated airflow variation system so that air doesn’t always get channelled the same way. This helps deal with dust buildup, which is a particular problem to clean up in laptops.

Speaker technology has come a long way and even low-profile laptop speakers are pretty good these days. Those are however not the speakers in this beast. The Predator has an overkill six-speaker system. That’s four full-range speakers and two subwoofers driven by Dolby hardware. Most people use headsets, so maybe it’s not all that important, but it definitely is impressive.

As an extreme gamer-focused product you’d expect a bit of flashiness in a laptop like this, but this is yet another area the Predator goes way over the top.

The keyboard gives you a fully controllable RGB lighting system, just pick a colour and the machine will oblige. There’s also light up buttons and a visible fan which also gives you RGB control. In fact, the whole shebang can be controlled from the “Predator Sense” system.

Lights and controllers are far from the only gamer-centric garnishes. There’s also the fact that this machine uses mechanical keyboard keys, with Cherry MX Brown switches. Most trackpad setups are also completely useless for gaming, but Acer has included a precision trackpad mounted under the Numpad. You just flip the Numpad over. Trackpads are still not great for gaming, but it’s a far more ergonomic solution than a pad mounted in front of the keyboard.

There’s a lot more to say about this overstuffed, overkill and overcompensating behemoth. There’s the weird eye-tracking thing that’s impressive, but few people will use. There’s also the impressive custom travel case that Acer created for the Predator for the person crazy enough to want to travel with it.

The other specifications are impressive, if less interesting. You get one SSD and one HDD, both at a terabyte. There’s 64GB of RAM too. So far, so ho-hum.

The case itself looks incredible and according to Acer, it’s a tough one too. Although the owner who’ll be careless enough to drop a 9K laptop is rare indeed.

In the end, the Predator 21 X is really a hypercar in computer form. It’s a technical marvel that shows us what’s possible when money’s no object. It’s not meant to be a product that sells volumes, but a flagship for Acer and the gaming community as a whole.

Five years from now a computer with these specs will be mainstream, but today if you want the beastliest gaming laptop money can buy, you may well be looking at it right here.

If however the Predator isn’t your cup of tea (or in your budget) check out our review of the Dell XPS 15, a laptop that we have a lot of love for.

Image is the Property of Acer. Used under Fair Use Doctrine