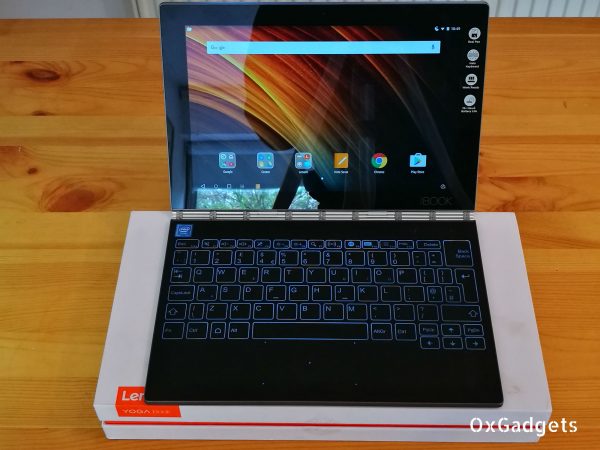 Between their acquisition of ThinkPad and Motorola phones, it is easy to forget that Lenovo has been at the forefront of a new age of tablets and laptops. With the introduction of the tent mode tablet to the world with the Yoga range to their tablets that pack in projectors, Lenovo has never been shy to introduce something new to the world. Their latest, the Yogabook, takes this one step further. This 2-in-1 not only comes with a pen but a magical keyboard that appears and disappears at will. When the keyboard isn’t there, the same area happily acts as a note taking area. In the box, you’ll find a pad and the pen will take refills so you can actually draw.

Oh yes, you can use the pen on the screen too.

The device comes in two versions, the Android, which was originally £450, and the Windows 10 Pro version which came at £550.

A few months on and Lenovo has dropped the price on both by a £100 each. This suddenly makes both of these rather attractive.

Before we jump into the review, let’s have a look at the specs:

We have also done an unboxing video of the device which takes a quick look at it. 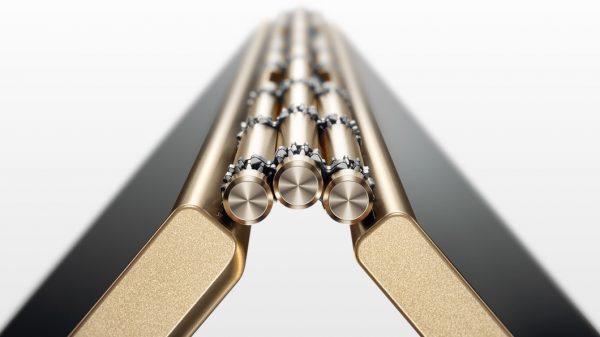 The hinge is inspired by the kind of stuff you see on high-quality watches, and it is designed to be opened and closed over and over again.

Once you get over the hinge, you open the device and notice the screen and the Halo keyboard below it. A major part of this is a touch pad, something that is easily missing from most Bluetooth keyboard accessories out there. 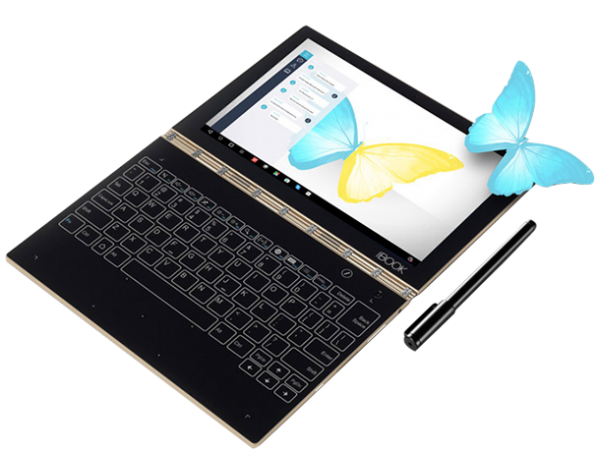 Like any other Yoga device, you can have it in tablet mode, laptop mode, or tent mode. 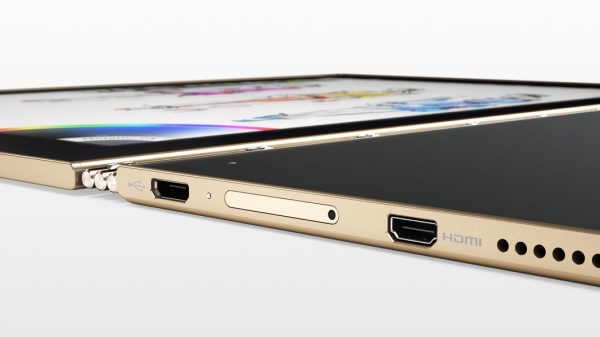 Once you go beyond the initial looks, you start to notice the ports. We have power, speakers, volume rocker and a headphone socket on the right side. The left side has speakers, micro HDMI, an SD Card and SIM slot, a status LED and a micro USB port. 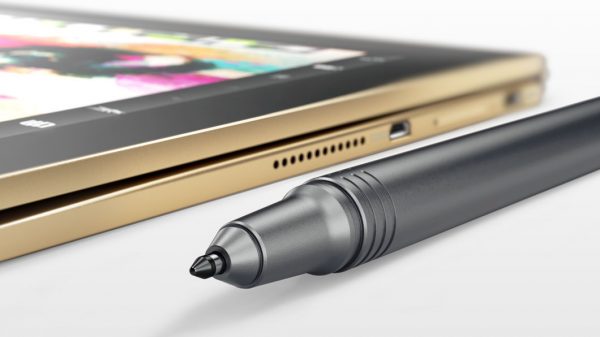 The pen itself comes with a stylus tip by default and works well on the screen as well as the pad. If you rather use it as a pen, you can use the lid to slide out the stylus and put in an ink refill instead. Bit of a knack to it. 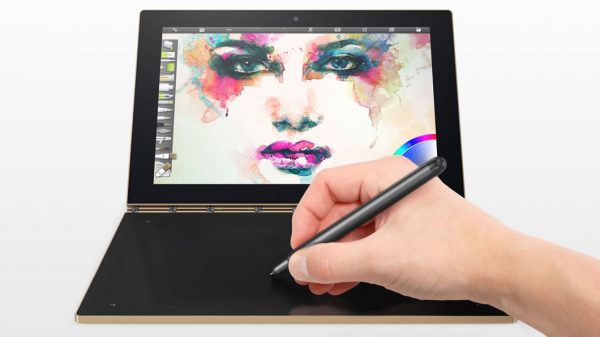 The pen is probably the most important part of this device. Use it on the pad, or on the screen, and you can create amazing artworks. My wife, who is quite good at a quick sketch did the following: 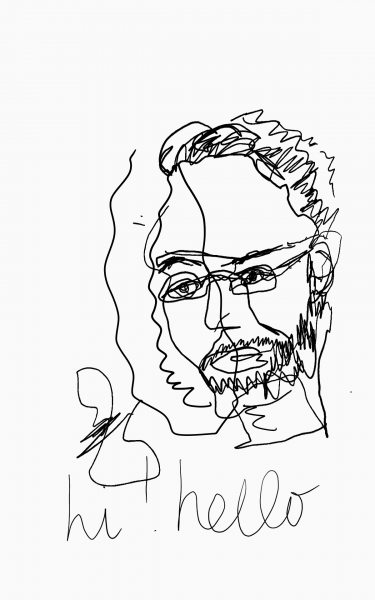 Drawing while looking at a different screen is bit of an interesting experience. People who are used to drawing pads such as the Wacom series are quite good at it. We weren’t as much. Oh, that is a portrait of me.

Of course, you can also draw straight on the screen, but what is the fun in that! 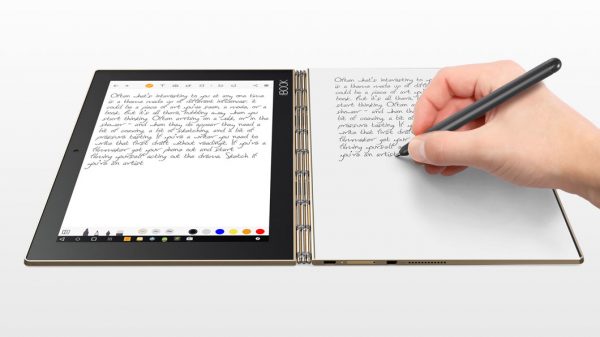 In more conventional day to day usage, you can use this with any bit of paper on top of the pad area. Even when your pads run out. Luckily you get three ink refills, and I am sure you can buy more if you need to.

All in all, this is a big part of the tablet experience offered by the Yogabook.

In a way, the Halo keyboard almost seems like a gimmick. Is it? Not quite. It isn’t quite a proper keyboard either. It takes a little getting used to, and since you don’t get any haptic feedback, it is more like typing on a touchscreen than anything else. However, Lenovo has seemingly built some intelligence into the system which means that if you press slightly away from a certain key and mean that particular key, it will calibrate the usage to know that.

In the amount of usage I got, it worked okay, but I definitely didn’t want to give up my physical keyboard.

What I really liked though, was the inclusion of a touchpad. Just makes the experience so much better.

With an Intel processor pumping inside, and 4GB of RAM, this device was anything but slow. We could play around and run apps and do things without noticing any hitch at all.

Lenovo aren’t quite sure yet when it comes to putting software on tablets. Older versions didn’t have an app tray, and were a lot closer to an iPad On this, you’re almost back to stock Android with the extra suite from Lenovo. Among the apps included, the note taking app as well as Art Rage are of particular interest as they let you fulfill the potential of both the pad and the Real Pen. We had a good play and they are fun. Of course, many other apps already exist in the Play Store that let you do exactly that, so feel free to play around or use something you’re already used to.

It comes with a promise of around 10-13 hours, and it happily delivers. Full marks!

More information on the Lenovo Yogabook can be found on their website.

Both the Android and Windows version have dropped a hundred quid, making them £350 and £450 respectively. They are available via various online retailers, including Amazon.

Somehow, at the previous price, this seemed like a gimmicky device that packed in a lot but was somehow not utilising its full potential. At the new price of £350, this seems like an interesting tablet that can be used both for creative purposes as well as something you can carry around with you for work.

Is it all the way there? No. But it is a great step into the exciting unknown by Lenovo.