Believe it or not, knives are the best and the most important invention after sliced bread. Or before. Or probably at the same time. I mean, you had to have knives to slice the bread – or some other sort of blade that would pass as a knife.

I think we just came up with then next hen-before-egg(?) dilemma…

Okay, so, who here knows their way around kitchen knives (all the types and their particular uses), or at least the typical ones?

To be honest, I was one of those who went for the regular Chef’s Knife for almost all purposes…

…until, lo and behold, I came across kitchen knives guides online. (Shameless-gloat-alert: They made my culinary experience worth boasting about on Instagram, Twitter, Facebook… You name it.)

So, to start off, we’ll be looking at the usual knives in this post. Typically:

The beauty and the shining star of all kitchens. It can be used for several different purposes, and that’s why it’s common to almost all kitchens. It’s typically used for slicing meat and dicing vegetables, with its rather long (varying between 6 to 14 inches) and relatively broad (about an inch and a half) blade.

However, due to the sheer size of the knife, it’s not an ideal one when it comes to detailing.

Also not ideal to stick it in electronics…

The Serrated Utility Knife is a little more limited in terms of use, due to its jagged blade and size. About half in size compared to the Chef’s Knife, this one varies between 4 to 7 inches in length.

It’s typically used to slice through soft fruits, vegetables or bread because it doesn’t tear up the skin. 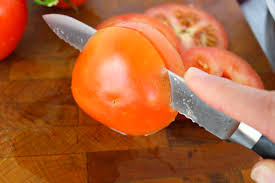 The Boning Knife, almost the same size as the Serrated Utility Knife, has a flexible blade which makes it ideal to carve away the meat from bones, ideally chicken or meat with softer, smaller bone.

The Bread Knife also has a jagged blade, much like the Serrated Utility Knife but is much longer (about 6 to 10 inches).

The jagged blade helps against tearing up the crust of the bread or through the loaf, for a more neater slice.

A Cleaver Knife is has a ginormous, relatively rectangular blade.

It’s used as a butcher knife, to hack through bones.

Some of them are naturally heavy, so that the weight adds on to the pressure against the bone for a more abrupt cut.

Horizontally, the sheer width of the blade can be used to crush vegetables and fruits such as ginger, garlic, pepper or any other seeds.

And finally, the Paring Knife. It is like a Chef’s Knife’s baby.

It has a very small blade, used for carving, garnishing, scraping away the seeds from peppers or jalapenos, de-boning small fish and other intricate works. 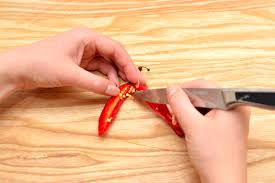 Like the Chef’s Knife, it is an all-purpose blade but for smaller cuts.

This was more of a sneak-peek into the common-to-all-kitchens knives. Knowing your way around even the most common types of knives can make kitchen-time a whole lot easier and more efficient. Give it a try. It might make your kitchen experience a lot of fun! Use the knives for exactly what they’re meant for and drop in your feedback if this post helped!

at home craftology, we have built a reputation as providing the best customer service and the highest quality diamond painting kits available. remy lace front wigs are the best quality wig types available and offer the most natural look for wearers.