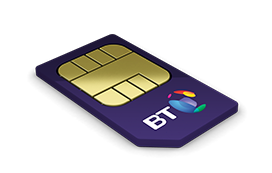 Back in April, BT decided to step back in to the world of mobiles. Originally the owner and founder of O2, they moved to a smaller setup before finishing off the consumer service. Now, they are back, and while it isn’t an independent service like O2, Three or EE, but it still brings you some interesting perks.

The basic tagline is that they are offering you the cheapest 4G around. Is that true? In today’s competitive world, that statement will always vary, but if you have BT Broadband at home, you will get an extra £5 off whatever the normal world will be paying. This isn’t unlike what the other mobile providers do, though in the opposite order. Generally  you get a fiver off if you use their SIM, and then subscribe to their broadband.

Anyway, back in April, BT sent me a SIM to try the service out, and see how good it is.

As of now, this is a SIM only, monthly subscription service. No phones are available under subscription, nor an offer of Pay as You Go SIMs.

This, to me, is the most important aspect of any mobile provider. I have changed mobile providers only twice since living in this country, and have had the same number ever, but it has always been because of coverage. Being an engineer means you are often working on an obscure ‘trade or industrial site’ away from it all, and they often struggle to get much signal. As such, if I am going to carry a mobile with me, it must have some reception.

BT essentially run on EE’s coverage, so it does not disappoint. I have gone from a service provider that had little or no signal at Harwell Campus, despite their website claiming it does to having a 4 bar 4G reception thanks to this SIM.

It works, and it works well. No issues to report, no dips in reception, no incidences of having bars but unable to connect. Pretty perfect.

If you do have doubts about reception in your area, or just want to check, click the following link and enter your location or post code:

While I have already discussed this in some detail above, it must be mentioned that the internet also works fairly well on these. I have had 4G in most places I went, and the speeds were brilliant!

Most mobile companies are starting to throw in perks to entice users. O2 has priority, Three has international roaming, and EE have … well, not much.

BT gives you free access to the millions of BT Wifi Hotspots that exist around the country, specially in towns and residential areas. Together with the app, you hardly ever have to use any of your own data.

There is also the offer of access to the BT Sport app.

Oh yeah, what about the Mobile Phones on offer?

Well, as far as I have understood, BT predominantly want to sell themselves as a SIM only service, with a subscription. There are no Pay as you go deals, and no expensive deals offering phones on a monthly rate either. No. You get to choose from a list of phones, of which there are only 5 on the list right now, from the Huawei Ascend Y550 to the Galaxy S5 from Samsung.

Yeah, the choice available isn’t brilliant, but it is good value for money after the discount of £50.

So, lets complete the circle.

How does it stand against others for value for money? If you are BT Broadband owner, then yes, this is pretty brilliant. For example, you can have 2GB of data, 1000 minutes, and unlimited texts for £12 a month. If you’re not in the club, the same price is £17 a month, which puts it on par with EE’s own similar offer.

20GB though, is £25 a month, which is actually a pretty good offer.

All in all though, if you’re not a BT Broadband customer, the prices are okay, definitely not expensive, but not extremely cheap either.

A lot of phone companies often fall down when it comes to the question of customer services. Sadly I cannot comment on this as I didn’t have the chance to bother them! As the company develops, it will be interesting to see what their policy is on this.

More information on the packages available can be found on the following link:

To have a look at the phones available with the discount, click the following link:

BT were the first ones, but they are definitely not the last ones. In a very competitive world, they have great packages on offer, with interesting perks and a coverage that cannot be faulted with. How well they develop as a mobile provider will be very interesting!