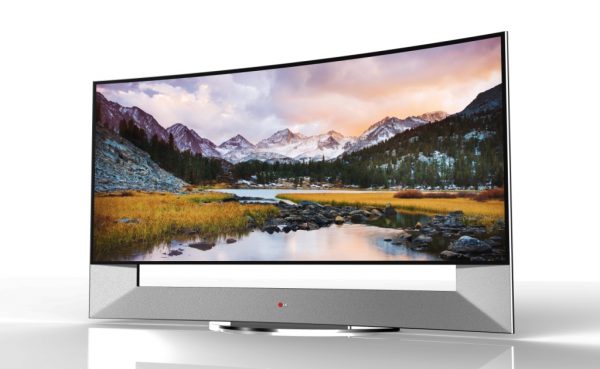 The year hasn’t ended, but the excited of CES 2014 in 3 weeks time has already begun. News and predictions have begun to flow in, and almost everyone is looking towards Las Vegas in extreme anticipation and excitement.

Never one to shy away from high tech announcements, LG have announced that they will be unveiling the world’s first 21:9 Curved Ultra HD TV at CES next year. It will also be their first curved Ultra HD model, and it will be a whopping 105-inches (diagonal in size). This also makes it the world’s largest curved TV ever made.

The curve helps you get a wide viewing angle, and the breathtaking clarity is a direct result of the 105UB9’s 21:9 CinemaScope screen. It also means that users can view information on the side of the screen without blocking any of the ongoing action. This could mean that soon sports transmissions could have a side bar, where they show scores, while rest of the transmission is shown in the regular sized screen.

The Ultra HD television boasts 11 million pixel, which gives it a resolution of 5120 x 2160 pixels, and it introduces a new technology which resolves a number of issues. Until now OLED panels were preferred for curved displays,but LG  have thrown in a Thin Film Transistor (TFT) pixel circuit to give you the best image possible.

“LG Display has kept its dominant position in the display market with innovative and differentiated technologies,” said Yong-kee Hwang, Senior Vice President and head of LG Display’s TV Business Unit. “With a resolution of 11 million pixels, the 105-inch curved LCD panel is proof of our continued leadership in the next generation display market, offering exceptional world-class value to our customers.”

Visitors to LG’s booth at CES 2014 (Las Vegas Convention Center, Central Hall #8204) from Tuesday, January 7 through Friday, January 10 will have the opportunity to see this unique product for themselves.

“We’re proud to reveal our 105-inch CURVED ULTRA HD TV at the world’s largest technology event,” said In-kyu Lee, Vice President and head of the Home Entertainment Company’s TV division at LG Electronics. “Claiming the world’s first and the world’s largest titles, LG’s 105UB9 employs cutting-edge technology to provide a truly unique viewing experience. We will continue to drive the next generation TV market and demonstrate that with LG, it’s all possible.”