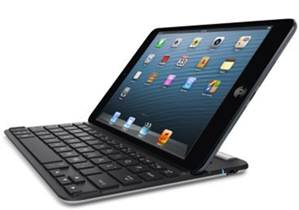 Belkin have recently announced that they will start selling  a bluetooth wireless keyboard case for the iPad mini to go alongside their similar offerings for the full-sized iPad.

Among some of the features mentioned in the press release, the FastFit™ Bluetooth Wireless Keyboard Case for iPad mini has a sleek design to minimise bulk and match the thin and light design of the iPad mini, the cover is held on to the iPad mini using secure-hold magnets, and the keyboard provides well-spaced keys that allow for fast an accurate typing.

The iPad mini version of the FastFit™ bluetooth keyboard will cost £69.99, the same price as the bigger brother for the normal iPad, and can be bought direct from Belkin’s online store.

At just seven millimetres thick, the FastFit keyboard cover is thinner than the iPad mini itself and ideal for traveling or typing on the go. Secure-hold magnets snap the keyboard onto the iPad mini for easy carrying without the added weight. The keyboard also features Belkin’s TruType keyboard, which provides well-spaced keys for fast and accurate typing. Each key has a spring mechanism that provides tactile feedback when struck, enabling fast, intuitive, and comfortable typing.

“Though the FastFit provides a laptop-like typing experience, it’s a far cry from traditional bulky laptop computers,” said Tristan Lericollais, director of product management at Belkin. “Dubbed the ‘skinny mini’ by some of our team for its demure size, it packs an impressive typing experience and feature set into a small package.”

The case’s low-powered Bluetooth 3.0 connection and 200mAh battery ensure comfortable wireless typing with optimal battery life. The FastFit case for iPad mini can last for 155 hours of active use without needing a charge. In addition, FastFit’s “auto-wake” feature activates the iPad mini when the cover is opened, and puts it to sleep when the cover is closed.

Availability
The FastFit Bluetooth Wireless Keyboard Case for iPad will be available from early July on www.belkin.com/uk

Belkin makes people-inspired products that harness the power of technology to enrich people’s lives. From wireless home networking and entertainment, to mobile accessories, energy management, and a broad USB and cable mix, Belkin products connect the dots between people and the things they love. Belkin is a privately held company that was founded in 1983 and acquired Linksys in 2013, creating a powerful platform to deliver the next generation of home and wireless networking experiences.  The new Belkin, including the Linksys brand and Belkin brand portfolios, has 1,500 employees, and sales in more than 100 countries. Belkin’s global headquarters are in Playa Vista, California. More information about Belkin products can be found at Belkin.com/uk and more information about Linksys products can be found at Linksys.com.

Everything you need to know about GALAXY UNPACKED 2019!