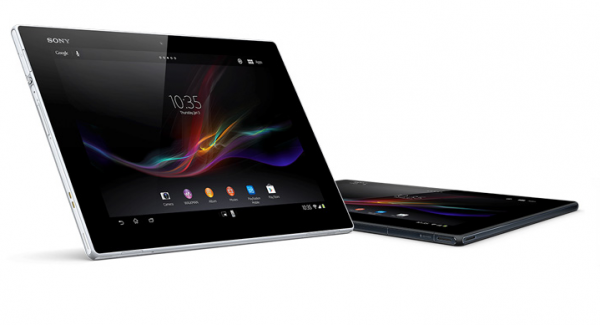 We discussed the Xperia Z tablet a little while back, and now Vodafone have announced that this feature full water resistant tablet will be available from them.

It can be bought for only £199 on a £28/mo data plan with 1GB of data included. Featuring Reality Display, Sony’s Walkman technology, Sony Entertainment, and ability to use it in the bath or while swimming (don’t ask me how), this is definitely the tablet to have!

It can be bought at the following link:

Experience the best of Sony with Vodafone’s first 4G ready tablet – the Sony Xperia Tablet Z – now available for £199 on Vodafone Mobile Broadband price plans for £28 per month including 1GB of data.

The new HD Sony Xperia Tablet Z brings you unparalleled power and performance, and as its super sleek Sony Omnibalance design is water resistant it remains unaffected when submerged in 1 metre of water for up to 30 minutes.

Combined with its dust resistance and anti-shatter durable tempered glass front panel, you’re free to use your Sony Xperia Tablet Z wherever you are  without a worry – whether you’re in the kitchen, by the pool, or even at a muddy festival.
Enjoy stunning graphics on the brilliant 10.1” Reality Display – powered by Mobile BRAVIA Engine 2 for enhanced clarity and colour – as well as an immersive wide-screen cinema experience with strikingly colourful scenes on the most vivid display imaginable. Furthermore, 3D surround sound technology and Clear Audio+ bring you a richer audio experience, so you can listen to music as it’s meant to be played.

The Sony Xperia Tablet Z runs on Android Jellybean, and operates on the latest Snapdragon S4 Pro Asynchronous quad core processor, providing remarkable speed and powerful computing – so you can enjoy unlimited entertainment at your fingertips without excessive battery drain.

The Sony Entertainment Network comes pre-loaded, so the Sony Xperia Tablet Z is bursting with apps, music tracks and films ready for download or streaming, and you can tap into Google Play for access to over 600,000 Android apps.

The Sony Xperia Tablet Z adds to Vodafone’s range of ‘4G-ready’ devices. Getting one of our 4G-ready devices means a customer will be good to go as soon as Vodafone 4G arrives, bringing them ultra-fast internet and the best mobile video they’ve ever had from us.  Once a customer has got their new device, we’ll let them know the moment Vodafone 4G is available in their area, and we can then talk about adding Vodafone 4G to their monthly plan. For more information visit vodafone.co.uk/4G-ready.