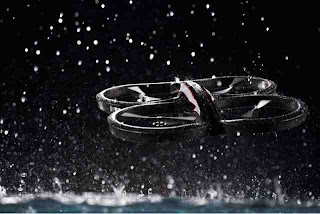 High up on my personal wish list of toys for boys (and immature grown men) is the Parrot AR.Drone 2.0. For those of you who are unfamiliar with the AR.Drone 2.0, it is a quadricopter that is controlled via an Android or iOS app, capable of performing some impressive aerobatics, as well as providing HD footage from its built-in 720p camera. Perfect for fun summer days in the park, or simply spying on your neighbours*.

To show off some of the AR.Drone’s capabilities, Parrot have created a super slow motion movie called ‘Built For The Elements’ – filmed at 1200 frames per second – created with a high speed Phantom Flex camera. A true technical achievement, it offers stunning images that underline the robustness and power of the Parrot AR.Drone 2.0, a one-of-a-kind quadricopter! We hope to one day bring you a full hands-on review of the AR.Drone 2.0, but in the meantime this video will just have to suffice.
I could attempt to wow you with descriptions of water, fire and “glass”-shattering aerobatic displays, but you’re probably better off just watching the video. You can watch it in the video embedded below, but make sure you change the settings to watch it in full HD (or just hit up the YouTube link below). It is also worth checking out the “making-of” video to see the lengths that they went to in making this short movie (link below).

*This should NOT be used for spying on neighbours, and we cannot condone such behaviour, no matter how hilarious or “interesting” the consequences may be…

‘Built For The Elements’ is a super slow motion movie – filmed at 1200 frames per second – created with a high speed Phantom Flex camera. A true technical achievement, it offers stunning images that underline the robustness and power of the Parrot AR.Drone 2.0, a one-of-a-kind quadricopter!

THE MACHINE FACED WITH THE ELEMENTS

The lighting in chiaroscuro, we are in a black set whose boundaries aren’t visible… The scene is set.
The singular shape of the Parrot AR.Drone 2.0 appears in a halo of light… Its engines pushing themselves to their limit, the quadricopter throws itself forward in a mad dash, during which it has to brave the elements rising up in front of it, like water or fire…
The extreme slow motion enabled by the high speed Phantom Flex camera reveals the magical and fascinating spectacle of the sturdiness of the machine pitted against the elements: the flames sucked up by the rotating motion of the propellers; droplets exploding on its blades…
The sound track, an astonishing metal rock version of Beethoven’s Ode to Joy, highlights the beauty of the images and the power of the flying machine.

To capture such precise images, Parrot used – for the first time – a high speed HD Phantom Flex camera. By filming at 1.200 frames per second with a 1920X1080 resolution, the camera captures every single detail of the Drone’s movements, revealing all that was invisible until then. With this camera, time seems to be suspended; and the Parrot AR.Drone 2.0 takes on another dimension. Much more than just a movie, ‘Built for the elements’ is a technical feat, a true cinematic experience.

Filmed over 4 days in a 500m² studio close to Paris, this one minute movie required more than 4 months of preparation! Parrot surrounded itself with a team of 40 professionals (Parrot engineers, pilots, decorators, lighting engineers, special effects managers) to create the video. The team was led by Ben Elia, director & producer, and Michel Benjamin, head cameraman who worked with Yann Arthus-Bertrand.
Parrot would like to make it clear that no AR.Drones were harmed in the making of this film.
‘Built for the elements’ in figures: