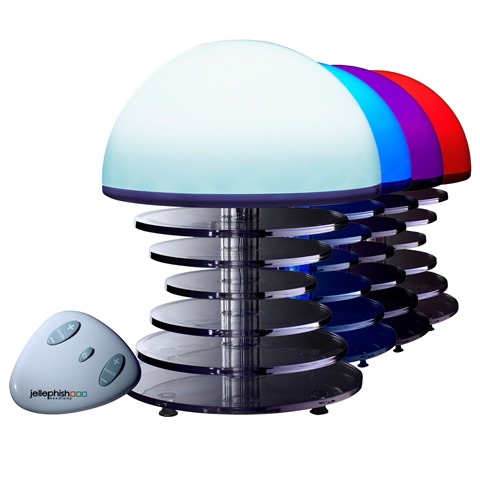 Mood lamps have been quite popular since the 90s. While the applications haven’t changed, the lamps available now are more economical, and somewhat smarter as far as their applications and usage goes.

Here, we review the Jellephish Mood Lamp, by a company called Jellephish Design, based in Nottingham.

What’s in the box:

Build the stand you say?

Yes. This can basically be used in two ways. As a wall mounted lamp, and on the stand you see in the picture.

The wall mount setup is good. It even packs in a second power input so you can attach the power cord on the side/bottom.

However, on the building side, the instructions lack clarity. In fact, it would have been nice if they had made it into two parts, stand, and top. Because of so many parts, it took me quite some time to put it together, and I am not shy when it comes to building (and breaking, aka taking apart) things.

Once together, the unit isn’t as sturdy as you’d hope. However, while it looks quite fragile with all those transparent bits, it is actually made of sturdy plastic and has enough weight in it to be sturdy and rigid.

Once built, the lamp works well as a light. It offers various moods, and allows you to control the modes and their abilities using the included remote. When with the stand/base, you can see the light shine through it, which adds a really nice effect of the jelly fish tail.

The modes provided are:

This retails at £48.99, and can be bought from www.iwantoneofthose.com.

This lamp is a bit of a hit and miss experience. It does the job, but has a flimsy structure. Also, the sound to light mode needs some work. There is room for improvement.