Ever since the advent of smart phones, battery life of the phone has become one of the biggest factors everybody complains about, but you never hear a manufacturer boast about. Yeah, they all take 10-20% more battery life, or a newer software update which promises less power consumption, but all in all, anything over a day is considered lucky with smartphones. 3 days is amazing, and anything more is normally met with a surprised look on your face.

This is where the Power Jacket Case comes in. In simple words, this is a case that comes with a built in battery for your phone, and as your phone looses power, or the battery drops in the red, you just hit a switch on this case, and there you go, extra charge for your phone. Since this is an amazing product, I will just quickly tell you the ‘but’ in it. That is the fact that it promises 2200mAh, which means it should have no problem charging the 1800mAh once, and leave you a bit extra for later. However, I discovered that this only gives my battery around 60% of a charge. So they either made a mistake in their packaging, or I have just ended up with a bad batch of these. Having said that, 60% extra charge on your phone, in an emergency, could make all the difference in the world.

So now that we have the bad and the ugly out of the way, let’s go for the good, and there is plenty with this case.

The case itself is very sturdy and hard, and provides a very good solid feel when the phone is in it. It is also easy to put on and take off. The beauty of the device is how this case is designed, as even with the phone plugged in, the case/phone combo is not much more heavier or bulkier than most smart phones that are available in the market. The case also packs in a handy folding rest, which means you can fold it out and use the phone to watch videos etc in landscape mode. Like all good cases, it also comes with holes and cuts for all the ports of your phone. On the back is an array of holes that lets the speakers function as they should. Near the bottom is another hole for the microphone, as well a hole for the camera and cuts for USB and headphones as well as buttons.

Now for the clever bit.

First of all, this works on using the diagnostic port on your HTC ONE X. While easily ignored, this is a line of 5 golden dots on the back of your HTC ONE X. What this means is, that by two spring loaded prongs that touch the back of your phone, and hence two of these dots, the phone can actually charge via the case without even having to use the USB port of the phone. It also means that taking the case on and off does not damage or age the connector in any way shape or form. There is also a USB port at the bottom, which is the same micro-USB as your phone, which means you don’t need to carry/buy anything more than what you already have for your phone. 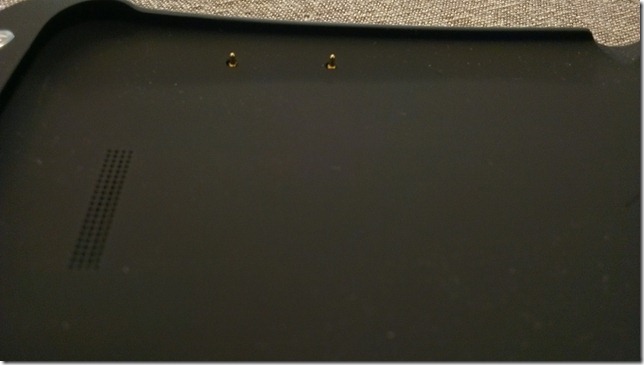 At the bottom of the case are 4 blue LEDs that indicate both the power of the battery while it is charging, as well as while it is charging your phone.  They prove to be quite handy to show how much charge is left in the charger as well as how much time it is required to charge the battery itself. Next to them is the power button, which means you have full control over when and how you charge your phone. You can of course, keep the Power Jacket fully charged, and charge the phone via the USB and use it for emergencies. Or you can pick and mix. Or just charge your phone via the the Power Jacket. Gives you choice. We like choice!

An extra battery for your phone? Nobody who uses smartphones would say no to that. Pack that battery inside a neat useful case? It only gets better! I think this is one of the most useful gadgets out there for smart phone use. More importantly, this Power Jacket is not exclusive to HTC ONE X only, but also available for devices such as the Samsung Galaxy S3.