Requirement: To communicate between two Arduino Mega boards, about 7 meters apart, sending 6 bytes of data, and receiving 2 bytes of data back from the other board, keeping the supplies and grounds for both the supplies separate.

The first thing to do was to establish an I2C between two Arduino boards. This was done by taking two pieces of wire (short length, about 20mm), where both the boards had the same 5V and Ground.

This was done by first sending a byte from the Master to Slave and seeing if it reaches the Slave.

In the second instance, the slave processes that data, and sends a response back to the Master.

This was then repeated by sending 6 bytes to the Master, and getting one byte back from the Slave.

In the final part of this process, the Slave sends back two bytes in reply. Surprisingly, due to the nature of the Arduino WIRE library, this is a lot more complicated than it should be, or at least as intuition lends it to be. However, more on that in detail in the implementation.

Second part of the procedure is to implement the same bus over a wire length that is 7 meters long. Because of the nature of I2C, a bus extender is required. There are many of these on the market, and a P82B715 will be used to implement this.

The main purpose of setting up an I2C bus was to get two Arduino Boards to talk to each other. Upon research of various communication options available, I2C stood out as a protocol that was already available and established, as well as simple to implement. It also only requires 2 wires (SDA and SCL) that are required for communication. More information about the I2C bus can be found in the reading material at the end of this post.

The Arduino communicates on the I2C bus via already dedicated pins. On the UNO they are pins 4 and 5 for SDA and SCL, while on the Mega they are 20 and 21. For other variations, the datasheet should be checked. 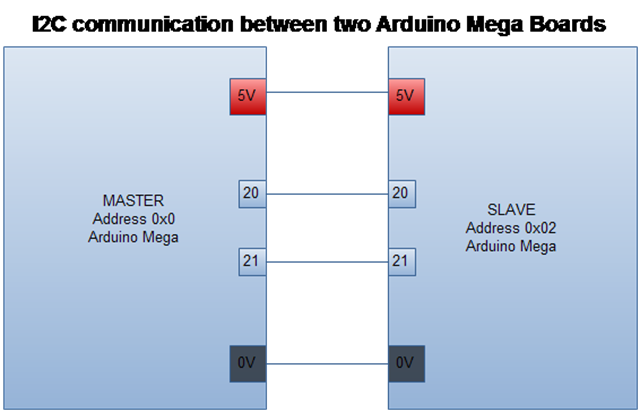 To use the I2C bus with the Arduino, the WIRE library, which is already a part of the Arduino IDE is used.

It should be noted that for this example/explanation the Arduino IDE 1.00 is used, and future as well as past versions may vary slightly. E.g. in the Arduino 22 IDE and below, the read() and write() commands are receive() and send() instead.

First thing to do is import the Wire library in both the Master and the Slave.

For the Master, in the setup() method, join the I2C bus:

For the Slave, in the setup, the I2C bus has to be joined as a certain address. In our example, we assign it address 0x02. This address is a hexadecimal value, and can be anything between 0 and 127. Which also means up to 127 devices can be added to an I2C bus.

Then in the Master, the sending and receiving of data is implemented.

This is started by the Master declaring that it is about to send data to the specified address:

After the operation is complete, the transmission is ended:

After this operation is complete, request data from the Slave, which specifies the number of bytes required as well.

Then the data is stored into a couple of bytes using the read() command.

And that is all there is to sending and receiving data via a Master.

A similar implementation is carried out in the Slave. The program specifies to call a method when it receives any data, and similarly it calls a method when it is requested to send any data.

While receiving data is the exact same as master, to send data, the outgoing information should be an array of the requested size (no. of bytes requested), where the bytes in that array have the required information.

So in the loop () method, specify which methods to call when I2C data is sent or requested:

And the method to receive is quite simply reading the bytes in and storing the values in global variables.

And to send, a similar thing is done, but in this case, a single write command is used, where it specifies the outgoing byte, as well as the size of that byte (or the number of bytes going out in that byte array).

For some reason, the Wire library, even though it seems to allow it in the documentation, or at least does not specify this as a limitation, cannot send more than one byte package at a time. So sending two different bytes separately just does not work, and the Master receives a 255, or a -1 as a response to that. There is information on this in the reading material provided.

This completes the software implementation of the I2C bus. Other methods and code can be added as required.

As is obvious, the lines that are being used for the I2C bus cannot be used for any other purpose in the Arduino code.

Extending the I2C bus over 5 meters

While this may not mean much to many Arduino Hobbyists, the I2C bus has a capacitance limit of about 400pF. In lay man terms, this translates to the fact that most wires have a capacitance of 80pF per meter, and it is hard for an I2C bus to operate above the length of 5 meters (5 x 80 = 400pF).

So in order to operate a bus over longer lengths, an extender such as a Philips/NXP P82B715 is used.

Following is a typical circuit example of how to implement this circuit: 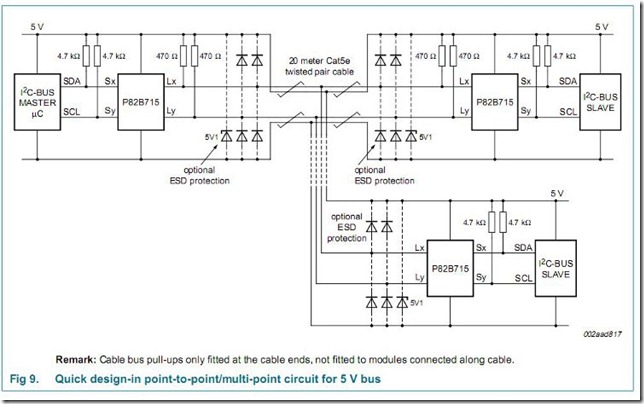 The extender chip basically serves as a current buffer. The standard I2C bus operates at 3mA, and this chip amplifies that to 30mA. What this does mean, however, is that two of these chips are required, one to push the current up to 30mA, and the other to bring it down to the 3mA level again. These chips are bi-directional so work well in this setup.

The currents of 3mA and 30mA also define the values of resistance we can go up to. A value of 4.7k will use up about 1mA on the source side, so this value should not be exceeded. A value of 470 Ohms will use about 10mA on the buffered side.

The resistance values shown above can be used for the implementation of the circuit then.

While this bus has been tested up to about 11m on a shielded twisted pair Cat5e, theoretically this set up should work up to 30 meters.

With the implementation of this, the circuit should look a bit like this:

This is where things get a bit more complex. There may be many reasons to galvanically isolate a bus.

A device that was used in this example was Analog Device’s ADuM1250. A typical circuit is shown below:

Image from the ADum1250 datasheet

It is quite important to add the pull-up resisters, which are defined by the standard I2C bus, so values of 4k7 Ohms on either side should work quite well.

While this setup seems to work well, it was found that adding the isolation did make the bus a lot more sensitive to errors. Changes in hardware configuration from the specified (e.g. not having the pull-up resistors, and disconnecting) meant that the Arduino would go in to a hang mode, such that it would not even reset itself despite having a Watchdog timer built in to the software. The only way to get out of this is to power it down and power it up again. The reset button on the board does not work as well.

FYI, the hang mode that I state here, can be seen on the board because the ‘L’ LED starts to flash rapidly (10Hz).

Another thing that was discovered was that adding isolation somehow meant that the working length of the bus also somehow reduces itself. However, for the current configuration it still works up to 7 meters. This does mean however, that if this is being done over shorter distances, a bus extender may still be required to help overcome this issue.

Oscilloscope Readings of an I2C Bus

It is actually not very difficult to read what data is travelling on the I2C Bus if the signals are scoped.

The SCL Signal, as expected, is a uniform pulse, with bigger spaces separating every byte.

This also means that if the bus was disconnected, the only bytes seen will be the send and receive command but no data shall be transferred.

Some images are as follows:

Zoomed out data sent and received.

Zoomed in. The top shows SCL, which are uniform pulses, and a bigger space between bytes. The bottom shows SDA, which is quite literally a high for a 1 that is sent and a low for a 0 that is sent there. As can be seen, there are quite a few noise spikes there, but in this instance, the smaller spikes seem to get ignored and hence do not affect the communication. 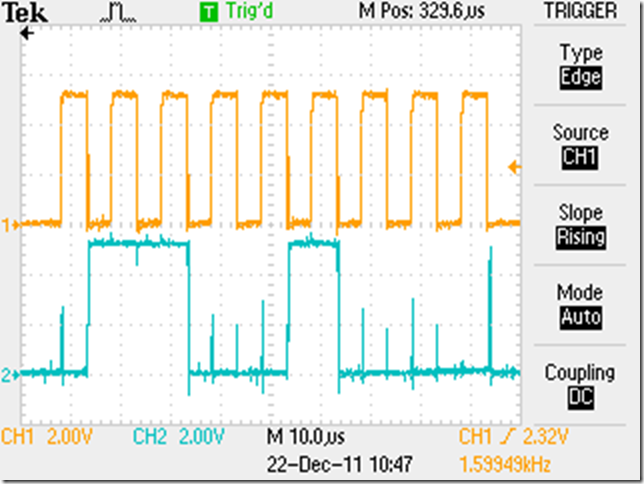 Further zoomed in, focuses on a single byte.